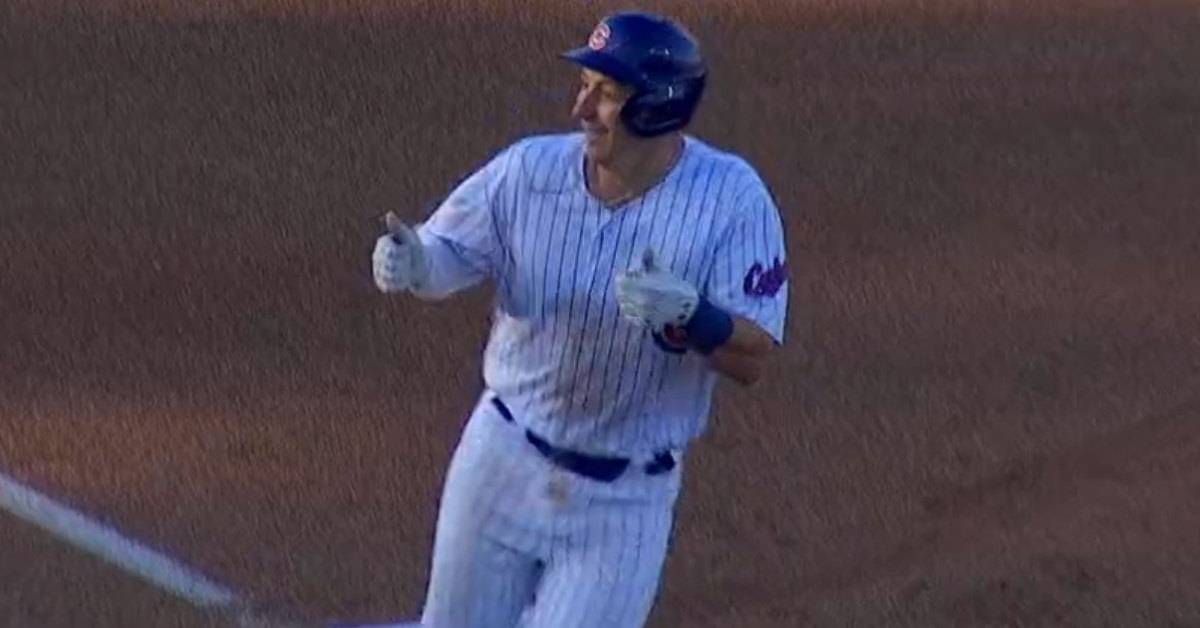 Schwindel homered in the rehab start

The Cubs have gotten off to a much better start this week as they returned to the field after an 0-3 night on Monday. Even with one game getting suspended and the Pelicans dropping one late, it was the Cubs coming away with a solid showing going 4-2 on the evening.

In their final series before the all-star break, the Cubs got off to a great start picking up the 8-2 win. Things didn't come easy, however, as most of the Cubs damage came after the sixth inning.

Luke Farrell got the start and continues to battle for his first win. Not only did he allow one run, but he gave the Cubs a season-high five innings in another no-decision. Farrell gave up his only run in the top of the second when Cullen Large picked up an RBI double to give the Bisons a 1-0 lead.

Jared Young ties it with his team-leading 14th home run of the year! Good for your @GreatClips Clip of the Game. pic.twitter.com/whYyf0yyWW

Speaking of homers, it was great to see Frank Schwindel go yard as he kicked off his rehab assignment with a solo shot in the fourth to put the Cubs up 2-1.

Frank the tank for the lead! pic.twitter.com/pcIb3BRzTr

That score would hold until the top of the seventh when Buffalo managed to tie things up following a costly error. At that point, Dixon Machado took over as he not only gave the Cubs a game-winning two-run single in the seventh, but turned right around and added a second two-run single in the eighth. Mix that with a John Hicks singles and Levi Jordan double, and Iowa pulls away for the 8-2 win.

This is the time of year when the weather becomes a factor in the Southern League, which is what happened Tuesday night. After four innings of play and the game tied 1-1, Mother Nature opened the heavens, and this game was suspended and picked up Wednesday.

After allowing an Andrew Monasterio homer in the first, Riley Thompson settled in nicely as that was his lone run allowed across 2 2/3 innings. For the Smokies, Alexander Canario provided them with all their early offense, using his 12th homer to bring things to 1-1.

If the Cubs could face the Chiefs every game, not only would they be a first-place club, but they would be in front by a wide margin as they knocked off the Chiefs for the 12th straight time. Not only that, but this was their fifth shutout of Peoria this season, and they now have nine as a team.

When you talk about a pitcher starting to come into his own, look no further than Jordan Wicks. The 2021 first-round pick not only allowed just one hit in five innings, but he walked two and struck out a career-high 10.

To make things even easier, Pete Crow-Armstrong provided him with the only offense they would need as he led off the game with a homer.

That homer was followed by two more runs in the second, with BJ Murray Jr picking up an RBI double and then coming home on the Yeison Santana single to make things 3-0 Cubs early. With the offense doing their part early, Wicks took care of the rest before he gave way to Luis Devers and his 2 2/3 scoreless innings.

South Bend would get their offense going again in the sixth inning when Yohendrick Pinango picked up an RBI fielder's choice before Crow-Armstrong stole home to make things 5-0. Add in the Owen Caissie homer in the eighth, and he closed out the scoring with the Cubs winning 6-0 and taking over sole possession of first place.

Our 9th shutout this season (5th against Peoria), puts us back into sole possession of 1st place!

Jordan Wicks was lethal, PCA and Caissie hit tanks, and we're 12-1 against the Chiefs this year. ??

With the game tied late, Fayetteville came through in the clutch, using a three-run eighth inning to get the job done against the Pelicans. With Myrtle Beach continuing to stumble out of the gate to start the second half, it will be interesting to see how things unfold, but this is still a great team.

Tyler Schlaffer went from struggling to looking like the team's new ace in a month. Schlaffer is dialed in right now as he struck out eight over six innings of work and was charged with just two runs. With both teams scoring in the first off of homers by Joey Loperfido and Kevin Made, the Pelicans took the lead in the second, with Juan Mora going deep for the fifth time.

No. 5 for Juan Mora! pic.twitter.com/WLn47Muhp8

One inning later saw Logan Cerny tie the game up with an RBI single, as that was the last run for quite a while. That was until the eighth inning when Rainier Rivas delivered the game-winning solo shot before Cerny added some much-needed insurance with a two-run shot. Those runs proved to be the difference in the Pelicans 5-2 loss.

Birds fall in the series opener.

The Cubs finally win one, coming off a nine-run first inning. Take that first inning away, and the Cubs not only struggled, but the Brewers dominated them for the better part of the game. Trailing 2-0 in the bottom of the first, the Cubs not only responded, but did so by pushing across nine runs.

Cristian More got things started as his RBI triple tied things up 2-2. That triple was followed by a Pedro Ramirez single and the Liam Spence double, and just like that, it was 4-2 Cubs. Leading 5-2, Cristian Hernandez picked up another RBI with a single before an error allowed for the seventh run to cross. A Parker Chavers single and Miguel Amaya walk capped off that inning with the Cubs leading the Brewers 9-2.

Give the Brewers some credit, as they didn't let that deficit bother them. Led by a trio of RBI singles and an RBI groundout, the Brewers managed to keep things close early, scoring four times in the second to pull within 9-6. They not only would pull within 9-8 in the fifth off of an error, but tied things up with Alberis Ferrer single as the once large lead for the Cubs evaporated.

Now facing a different game in terms of score, Anderson Suriel came through with one of his bigger hits of the season. His RBI single proved to be the winning hit as the Cubs retook the lead 11-9 and won by that score.

Despite not scoring until the sixth inning, the Yankees came out on top as all 12 of their runs came from the sixth inning. That wasted a great start from Gabriel Agrazal, who lowered his ERA to 0.60 following five shutout innings.

Agrazal was backed by a first-inning sacrifice fly from Jose Herrera as his pitching made that 1-0 lead hold for a while. That score held until the fifth when Sandy Sanchez picked up a huge RBI triple to extend the lead to 2-0 before he came in to score on the Jefferson Rojas sacrifice fly.

Leading 3-0, the Cubs went to their pen in the sixth. That is when everything changed. As if a sixth-inning balk to bring home the Yankees first run in the sixth wasn't bad enough, how about an error that tied things up before the Juan Matheus sacrifice fly proved to be the winning RBI.

That four-run sixth was followed by a massive seven-run eighth as the Yankees offense kicked it into high gear. Ironically, none of those runs came via the homer as the Yankees singled the Cubs to death to pull away for the 12-3 win.

Wins have not been coming as frequently in the Rookie League as they have in the full-season leagues, so when it happens, it is nice to see. Like with DSL Blue, the Cubs had a great pitching effort from start Melvyn Amador as he allowed just one run in four innings before the bullpen nearly gave up a big lead.

Joan Delgado put the Cubs in front 1-0 in the first, but the Rangers were able to answer in the bottom half to push the lone run Amador allowed in. Delgado may have given the Cubs the lead, but he wanted to ensure they kept the lead as he added a go-ahead triple in the third to make things 3-1.

One inning late saw the Cubs offense continuing to go to work with Darlyn De Leon, adding a two-run triple to make things 5-1 and then coming home to score on the Andrews Cruz double. Holding a 6-2 lead in the sixth, it was the Rangers turn to get hot offensively as they pulled within 6-5 in that inning. While a walk may have brought in the first run that inning, the Juan Diaz double brought the Rangers within one.

They then continued their comeback bid in the seventh inning Fraimin Marte uncorking a wild pitch to allow the tying run to score. Although stunned at this point, the Cubs didn't let that deter them as Luis Maza pushed home the winning run in the eighth off a groundout as the Cubs won 7-6.