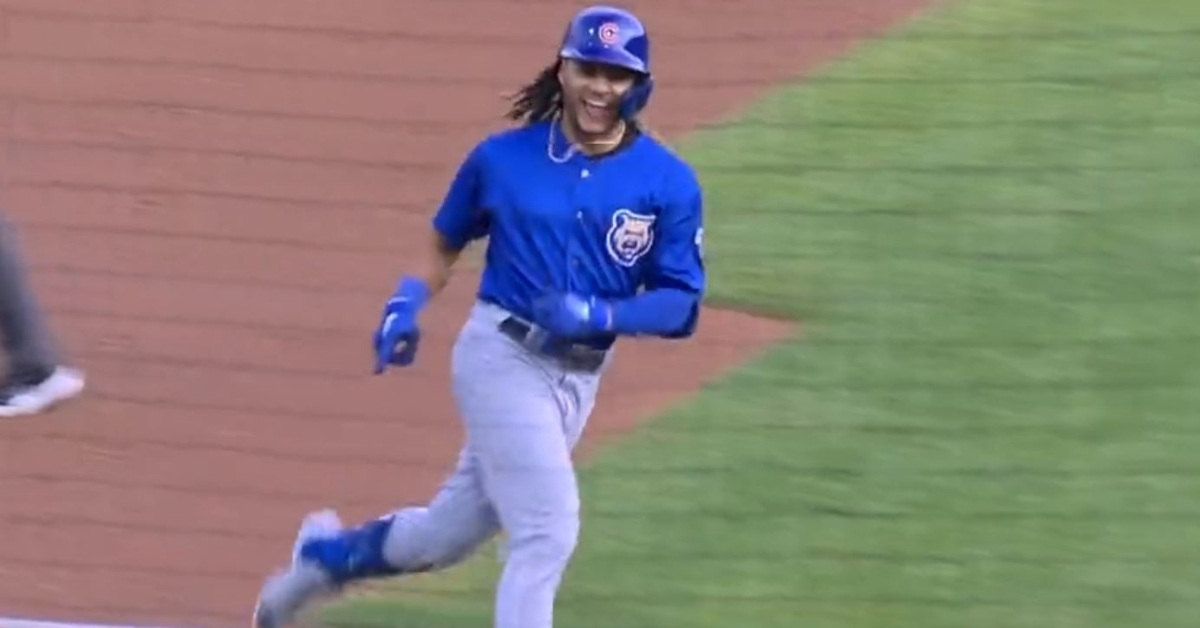 Things continued to be .500 on the diamond Thursday night as the Cubs posted another .500 showing. Fortunately for them, both wins came from teams looking to drop their magic number as the playoff race continues to come full force.

Despite taking the loss on Thursday, you have to give the Cubs some credit as they battled back from a huge early deficit. Adbert Alzolay made the start and was not good going just 1 2/3 and allowing four runs. That type of damage early on is difficult to recover from, which is what happened to Iowa.

After a scoreless first inning, Columbus had the bats working in the second as all four runs came in that inning. David Fry and Mitchell Tolman connected for RBI doubles, while Oscar Mercado and Will Brennan added RBI singles. Michael Hermosillo was looking to continue his impressive start since arriving at AAA as his first homer of the season pulled Iowa within 4-2 in the third.

Michael Hermosillo goes deep to cut our deficit in half! His two-run blast is good for your @GreatClips Clip of the Game. pic.twitter.com/7wHU7zVDd4

Columbus not only scored in the bottom of the third, but picked up two more runs, with Mercado picking up another RBI single ahead of the Brennan sacrifice fly to make things 6-2. Still in catchup mode late in the game, the Cubs received a two-run homer from Matt Mervis in the eighth and a solo shot from Jared Young in the ninth, but that was it as the Cubs rally fell short.

Hermosillo raised his average to .444 with his two hits, while Mervis is now at .301.

The Smokies continue to take care of business and control their playoff destiny as they knocked off the Braves again. This time it was a complete team effort as a pair of three-run innings and a strong pitching performance was the telling story in the end.

Getting the start for Tennessee was Ryan Jensen, who came one inning away from getting the win after allowing one hit in four innings with five strikeouts. He gave way to a quartet of relievers, including Ben Hecht, who earned the win in relief.

After Harrison Wenson put the Smokies on top 1-0 with an RBI single in the second, it took four innings for them to score again, but they made sure they would do it in style. Yonathan Perlaza doubled that lead with a game-winning homer in the sixth before the Andy Weber single extended the lead to 4-0.

One inning later saw the Smokies offense at it again as they pushed across three runs for the second straight inning. Those runs came home on the Bryce Ball homer to give the Smokies a 7-0 lead before Logan Brown ended the shutout with an RBI groundout in the bottom of the inning. Jake Slaughter led the offense with three hits, while Perlaza and Wenson added two.

If the Cubs remain focused and continue to play winning baseball, they may clinch a playoff spot by the end of this series. That is because Beloit continues to struggle as the Cubs dropped their magic number down to 4 with nine games remaining. The win also marked the eighth straight win at Four Winds Field as this team continues to play great baseball.

As expected, when Luis Devers takes the ball, runs will be hard to come by as the right-hander continues to make his case for the organizational pitcher of the year. Devers got through five innings, allowing one run on four hits, but also struck out eight. His ERA continues to be microscopic as he sits at 0.96. Riley Martin and Michael McAvene each threw a pair of scoreless frames after that, with McAvene earning the save.

Despite allowing just one run, Devers found himself in an early deficit as the Cooper Bowman sacrifice fly in the second put Lansing up 1-0. That lead didn't last long as Jordan Nwogu single-handedly put the Cubs on top, tying the game in the third with an RBI groundout before delivering the game-winning single in the fifth. An RBI double from Yohendrick Pinango in the seventh capped off the scoring with the Cubs winning again.

For as bad as the Pelicans have played during the second half, they are at least showing they can still play with the best, falling in walk-off fashion to Charleston. A massive four-run inning bailed out Grant Kipp as the rookie right-hander allowed four runs, three earned in four innings of work. Fellow rookie Brody McCullough took over from there and tossed 1 1/3 scoreless frames before the back of the bullpen faltered late.

Pedro Ramirez put the Pelicans in front 1-0 in the first with an RBI single, only to see Carson Williams put the Riverdogs in front 2-1 with his homer. That 2-1 score remained intact until the fifth inning, when Kenny Piper and Shane Sasaki added RBI singles to extend the lead to 4-1.

One inning later saw the Pelicans bats come to life as they wanted to show the Riverdogs they were still the team from the first half. RBI singles from Haydn McGeary and Ezequiel Pagan made things 4-3, while a throwing error tied things up. Add in the bases-loaded walk by Parker Chavers, and the Pelicans retook the 5-4 lead.

Hoping to close things out in the late innings, the Pelicans not only saw Bobby Seymour tie things up with a single in the eighth, but would find more heartbreak in extras. With a pair of runners on base and trailing 6-5, Sasaki came through with a massive hit as he capped off his three-RBI day with the walk-off two-RBI hit that gave the Riverdogs a 7-6 win.