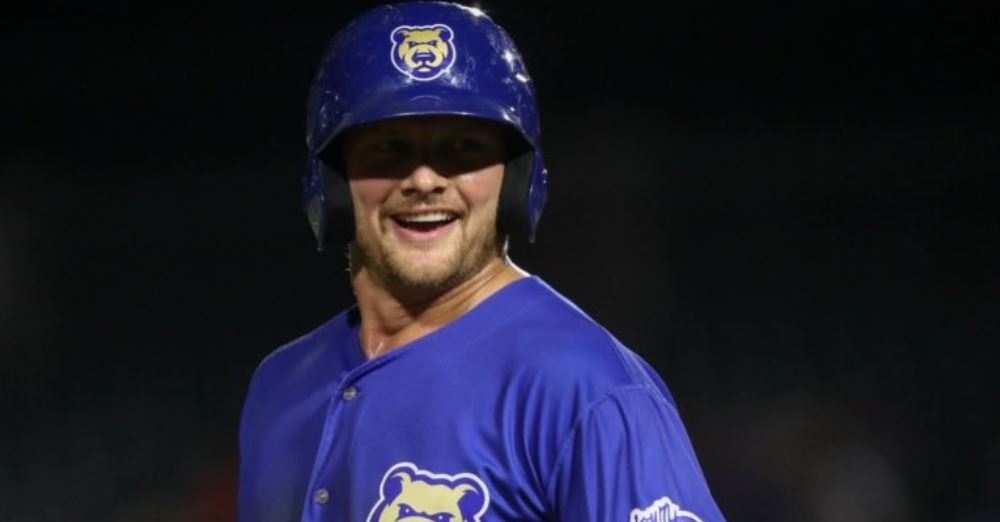 Hicks had another homer (Photo via I-Cubs)

Thursday was the last night of the summer as the Cubs had a full slate of minor league games. However, it was not a great night as the Cubs saw the system post a 1-3 mark, and one of their postseason teams get sent home for the winter.

Backed by some early offense and another solid pitching performance by Wyatt Short, the Iowa Cubs managed to make it two straight vs. Memphis. Had the Cubs known Short could be this consistent in the rotation, they may have put him in the rotation sooner as he gave the Cubs five innings of three-run ball in the win.

All eight of the Cubs runs came in the first four innings as they gave Short plenty of support. Esteban Quiroz opened the scoring with an RBI double in the second before Iowa added another run to make it 2-0. Iowa appeared to put the game away in the third inning as they used a five-run frame to make things 7-0.

Alexander Canario returned to the lineup to deliver an RBI single to open the scoring. Trent Giambrone and Darius Hill followed that up with RBI doubles to make things 7-0. Leading 7-1 in the fourth, John Hicks capped off the scoring for Iowa with another homer as the Cubs led 8-1 at this point.

Memphis used a pair of homers from Juan Yepez in the fifth and Moises Gomez in the seventh to pull within 8-5, but that was as close as they would get. Hill led the way with two hits and two RBIs.

Two in a row over Memphis! pic.twitter.com/pOcX4Ru2Rq

With two teams on the verge of being eliminated from playoff contention, all eyes will shift to Tennessee next week as they begin their playoff run. Until then, they just want to get through the rest of the season, but wins have been hard to come by.

Dalton Stambaugh has had a rough go of things this season, but he showed up in a big way on Thursday. He gave the Smokies four solid innings of one-run ball with six strikeouts before the rest of the bullpen struggled to get it done.

Stambaugh was backed by some early offense, with Luis Vazquez and Bryce Windham picking up RBI singles in the second inning to make things 2-0. Matt McClain pulled the Lookouts within 2-1 in the bottom of the third, while Cole Roederer unloaded for yet another homer in the fourth to make things 3-1.

With Jarod Wright on the mound in relief of Stambaugh, things got rough in the sixth inning as the Lookouts took the lead for good. Quincy McAfee brought Chatanooga within one with a sacrifice fly before the Christian Encarnacion-Strand single put the Lookouts in front 4-3. Rece Hinds added an RBI double in the eighth to cap off the scoring as the Smokies fell 5-3. Vazquez had a three-hit night to go with his RBI.

Backed by a three-run inning, the Kernels managed to fend off elimination and tied their series with the Cubs. Porter Hodge did what he needed to keep things close, but a rough showing from Adam Laskey in the fifth was all the Kernels would need to finish things off.

Both teams exchanged RBIs in the second, with Luis Verdugo picking up the Cubs first run and Jake Rucker tying things up with an RBI groundout. One inning later, the Kernels grabbed the 2-1 lead as Wander Javier connected for his first homer of the postseason. South Bend continued to battle with Pablo Aliendo tying things up with an RBI single in the fourth before Fabian Pertuz put South Bend in front 3-2 with his fifth-inning homer.

That lead didn't last long as the Kernels pushed across three runs in the bottom of the fifth to take the lead for good. Two of those runs came on bases-loaded walks, while the other came from a balk. With the series now tied 1-1, the Cubs are looking to finish things on Friday as they send Daniel Palencia to the mound.

After what was looking like a promising start to the season, the First half division champions struggled all second half and saw their season end on Thursday to Charleston. Despite a good start from Didier Vargas, the Pelicans offense struggled to get it done and will now watch the rest of the playoffs from home.

Vargas's final line doesn't look great as he allowed seven runs, but he was only charged with three as the defense him down numerous times. Despite allowing a two-run homer to Bobby Seymour in the first, Vargas was on point early as he struck out the first five hitters of the game. Immediately following the Riverdogs homer, the Pelicans answered as Juan Mora singled up the middle before Haydn McGeary unloaded for a long homer to tie things up 2-2.

Now about to go down without a fight, the Pelicans did their best to force a game-three, and it was a pair of ninth-inning homers from Moises Ballesteros and Josue Huma that made things 10-5.

McGeary added an RBI single later in that inning to make things 10-6, but the Pelicans saw their season end there.

Huma picked up three hits from the leadoff spot, but McGeary led the offense with three RBIs. Despite not making it past the first round, the Pelicans had a great season as they finished the year with a 78-53 mark.

Congratulations to the Charleston RiverDogs; good luck in the Championship Series.#MBPelicans pic.twitter.com/A1RA9naCQ8