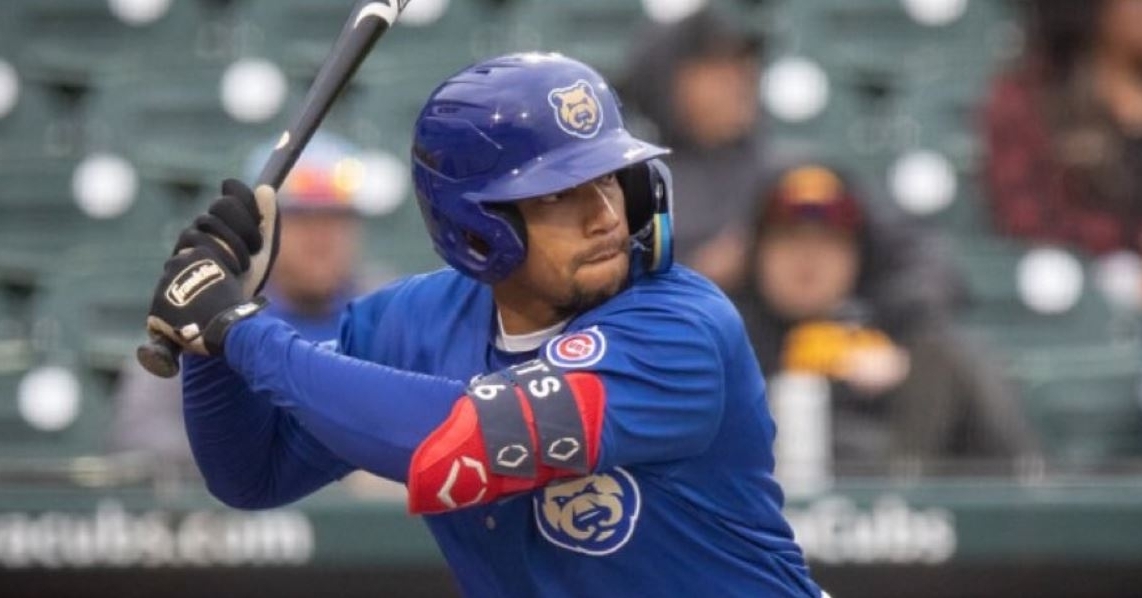 Machado had three hits and a RBI (Photo via Iowa Cubs)

For the second straight night, the Cubs minor league system had a great night with the full season leagues going 3-1. That managed to offset the Rookie Leagues as they went 0-1 with both DSL teams getting together in the Dominican Republic as the Cubs finished with a 3-2 mark on Thursday.

Had it not been for a controversial ending in Iowa, the organization would have gone 4-1, but either way, a winning night is all you can ask for. With the trade deadline rapidly approaching, get used to some of these names as you could see them in Chicago sooner rather than later.

Although the Iowa Cubs were the only full-season team to fall, things were not always like that, as they were three outs away from a win before falling in extras. For some reason, Caleb Killian has forgotten how to throw strikes, and you have to wonder if those rough outings in the majors messed with his head.

The right-hander labored through three innings despite allowing two runs as he walked five and struck out six. Brandon Liebrandt and Ben Leeper relieved him, who allowed no runs in five innings of work while the back end of the pen struggled. Not only did the walks play a massive role in the quick hook for Killian, but walks are what brought home his earned runs as a pair of bases-loaded walks in the second put the Bison on top 2-0.

The next three innings saw the Cubs rally and take the lead as they scored runs in each of those innings. Nelson Maldonado put the Cubs on the board in the third using an RBI double to make things 2-1. One inning later, Zach Davis picked up an RBI double of his own to tie things up 2-2. Moving to the fifth, it was time for Jackson Frazier to strike as his fifth homer gave the Cubs a 3-2 lead.

At the time, no one expected that lead to hold up, but as the game moved to the ninth, the Cubs still held that 3-2 lead with Michael Rucker coming on for the save. Despite allowing a pair of hits and working harder than he would have liked, Rucker was on the verge of getting out of the inning with no damage. That was until a controversial call on Tyler Payne ruled in Buffalo's favor as the error made things 3-2 and sent the game into extras.

With both teams coming away empty in the 10th, the Bison retaking the lead in the 11th with Chavez Young picking up the go-ahead single and Jordan Groshans driving in the winning run via groundout. Down to their final three outs, the Cubs didn't go down without a fight, with Dixon Machado picking up an RBI to pull them within 5-4. Unfortunately, that was it as Iowa dropped a tough one in extras.

Machado led the way with three hits, making three-consecutive three-hit nights. Levi Jordan, Tyler Payne, and Davis had two hits while everyone in the lineup got one.

The Smokies picked a great time to start playing winning baseball as they guaranteed themselves a series split with a third-straight win against Biloxi. While the offense did most of their damage in the middle innings, Tennessee had pretty good pitching with Ryan Jensen starting things off.

The 2019 first-round pick didn't get the win, but he did give Tennessee 3 2/3 innings of one-run ball while adding four strikeouts. He gave way to Dalton Stambaugh, who picked up the win while Jeremiah Estrada earned the save. The lone run off of Jensen came in the first when Garrett Mitchell picked up an RBI single to put Biloxi in front 1-0.

It may have taken four innings, but after solo homers by Chase Strumpf and Alexander Canario, it was the Smokies who now had the lead 2-1. Looking to respond in the fifth, Biloxi used the long ball as Andrew Monasterio tied things up with a solo shot.

On the strength of their third solo shot, Luis Vazquez put the Smokies on top for good with a solo shot in the bottom of the fifth before the Jake Slaughter single proved to be the winning run. Cole Roederer extended the lead to 5-2 with a sacrifice fly in the sixth, only to have Mitchell keep things close with another RBI in the seventh.

That was as close as things would get as Matt Mervis and Strumpf added RBIs in the bottom of the seventh to extend the lead to 7-3 and win by that score. Slaughter continues to mash AA pitching as he led the way with three hits. Strumpf and Canario added two hits in the win.

The Smokies get their third win in a row with a 7-3 victory over the Shuckers! pic.twitter.com/6a7dMuMf3W

When you talk about a team having another team's number, look no further than South Bend, who improved to 13-1 against the Chiefs this season. Not to mention, those 13 wins have come consecutively as they have won the last 13 meetings.

Despite the offense scoring all their runs in the first two innings, it was more than enough as DJ Herz was back on the bump, allowing just one hit in five innings with six strikeouts to secure the win. His ERA sits at 2.25 this season, and it is only a matter of time until he reaches AA. Herz gave way to Michael McAvene, Riley Martin, and Eduarniel Nunez, who finished things off.

While Herz and the pitching set the tone, the offense made a considerable dent early, pushing across four runs in the first. Fabian Pertuz opened the scoring with an RBI single before the groundout made things 2-0. Later in the inning, Yohendrick Pinango came through as his RBI single doubled the Cubs lead 4-0.

Pertuz would pick up the Cubs final run with a second-inning RBI single, but the game was already 5-0. Herz went on to allow his only hit and only run in the bottom half of the second, with LJ Jones going deep for his seventh homer. The Cubs had three players responsible for their six hits as Pertuz, Pinango, and Pablo Aliendo did the damage.

That's a 14-1 record against Peoria this season ?? pic.twitter.com/Zoz3p42VO3

It took three games, but the Pelicans picked up their first win of the week in dominating fashion. Richard Gallardo was nothing short of amazing on Thursday, ending a rough stretch. The right-hander went six innings, allowing one run on four hits. Most importantly, his command stood out as he walked none and struck out a career-high 13 in the win.

Gallardo didn't need much support, but after the Jacob Wetzel single in the second gave Myrtle Beach a 2-0 lead, you could see him settle in. Jaxon Hallmark delivered a solo shot as the lone run off the Pelicans starter, with Fayetteville pulling to within 2-1 at that point.

Once the fifth inning got underway, it was all Pelicans as they used a five-run inning to bust things wide open. Ezequiel Pagan, Josue Huma, and Matt Warkentin picked up RBI hits, while Wetzel added an RBI groundout.

Holding a 7-3 lead in the seventh, the Pelicans used another big inning to push across four runs, with Warkentin and Malcolm Quintero picking up RBI hits mixed with an error to lift the Pelicans 11-4. Warkentin led the way with two hits and three RBIs as he was joined by James Triantos, Pagan, and Huma, who all had two-hit games.

The ACL Cubs received a fabulous pitching performance for the first time in a long time. However, with just two hits, that pitching performance went to waste as the Cubs fell 3-0. Sam Thoreson continues to rehab from an injury last season, but made it just 2/3 innings while allowing two runs.

Those runs came from bases-loaded walks in the first inning as the Brewers took a 2-0 lead and never looked back. Give the Cubs pen some credit, as they were able to match the Brewers pitching the rest of the way, with Gregory Berrios adding the final RBI in the fight in the 3-0 win. Pedro Ramirez picked up both hits for the Cubs as his average is .330. Cristian Hernandez, Moises Ballesteros and Miguel Amaya combined to go 0-7 in the loss.

The Best part of having two DSL teams is watching them play each other. Granted, these games count in the standings with both teams sitting at 9-21, these games are more about bragging rights than anything.

With Adan Sanchez putting DSL RED in front with an RBI single in the first, Jose Herrera gave Blue the lead with a second-inning two-run homer. Andres Bonolis kept the game close with an RBI groundout in the bottom of the second, but it was about to be all Blue as their offense erupted over the next few innings.

Not only did the Jefferson Rojas homer and Jose Escobar single lead to two runs in the third, but the Cubs pushed across five runs over those three frames to take a comfortable lead. Rojas added an RBI double to go with that homer to put Blue on top 6-2, while Jairo Diaz added a sacrifice fly in the fifth.

Down 7-4 in the seventh, it was time for DSL Red to have a big inning of their own as they plated three runs to tie things up. Julio Valdez started things with an RBI double while a double play brought home the second run, but potentially killed a rally. Give DSL Red some credit as Darlyn De Leon picked up an RBI single to get things back to even 7-7.

Diaz would get the last laugh for DSL Blue, as his RBI single in the seventh proved to be the winning run in the 8-7 DSL Blue win.