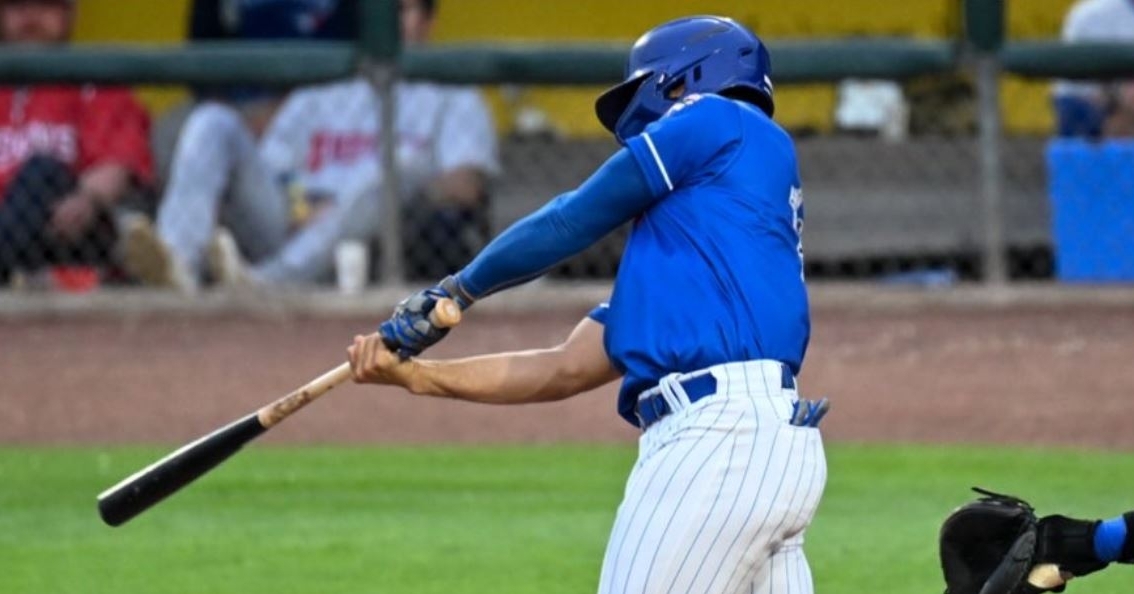 Maldonado had two hits in the loss (Photo via Iowa)

Playing .500 ball is nothing to get overly excited about as that tends not to land you in the playoff picture. However, that has been the common theme over the last few days as the Cubs continue to play .500 ball to close out the week as the minor league all-star break looms.

Ultimately, the entire organization would love to see more wins, but it is about development which is starting to show up in a big way. South Bend pitchers DJ Herz and Jordan Wicks have now moved on to AA, as that could become a common trend the rest of the way.

For the most part, this week's series against Buffalo has been competitive, which is what fans always want. Even with the loss on Saturday, the Cubs kept things interesting late, which kept fans engaged.

Javier Assad hasn't gone more than four innings since arriving in AAA, but when you allow two runs, you are doing what you need to do. He gave way to a bullpen that was lit up in the three innings following his outing, which was the difference in the game.

Pitching to a scoreless tie in the third, Buffalo grabbed the lead first on an Otto Lopez single before doubling their lead in the fourth on the Nick Podkul double. It didn't take the Cubs long to respond, with Nelson Maldonado ripping an RBI double in the bottom of the fourth to tie things up 2-2.

That score would hold until the sixth inning when the Buffalo bats started to wake up, with Logan Warmoth giving the Bisons the lead for good with a two-run shot. Spencer Horowitz would add an RBI double later in that inning to extend the lead to 5-2 before a wild pitch made things 6-2.

Still trailing in the eighth, the Cubs at the very least made things interesting as Narcisco Crook ripped an RBI double ahead of the Jackson Frazier RBI ground out to make things 6-4. Jared Young would add an RBI single to make things 6-5, but that would be as close as the Cubs would get. Maldonado had two hits, with six others grabbing one.

Saturday was a great day for Tennessee in more ways than one. Not only were the Smokies able to pick up another win against Biloxi, but fans found out that DJ Herz and Jordan Wicks would be moving to AA and helping solidify their rotation.

As things stand right now, the Tennessee rotation has some pieces, with Walker Powell being one of them. After five innings of one-hit ball, Powell lowered his ERA to 2.08 and picked up his first win in AA. Matt Mervis gave him the early run support he needed as the third-inning RBI double put the Smokies in front 2-0.

THE RBI MACHINE! A double by Matt Mervis makes it 2-0 Smokies in the bottom of the 3rd! @mmervis12 pic.twitter.com/TMk1jigHc1

That score would hold until the sixth inning when Alexander Canario unloaded to double that lead 4-0 and put Powell in a better position to win this game. With the bullpen continuing to control the game, the Shuckers made things interesting late, which started with a Garrett Mitchell single in the eighth to make things 4-2.

Biloxi pushed home another run in the ninth off the Danis Correa wild pitch, but the Smokies held tough, picking up the series win over Biloxi. Andy Weber and Canario led the way with two hits as Canario is slowly starting to heat up at the plate.

Tennessee, Tennessee, there ain't no place I'd rather be! pic.twitter.com/TfMEu3E3WT

It is amazing what one win can do for a team. After dropping 13 straight to South Bend, Peoria not only won on Friday but turned right around to plate three runs in the fifth to win 3-2 on Saturday. Daniel Palencia was strong, but after just 3 1/3 innings, it was up to the bullpen to work overtime.

Filling in for Pete Crow-Armstrong, who was at the Futures game, Jordan Nwogu delivered the first run of the game as his fourth-inning homer made things 1-0. That lead would hold until the next inning when Peoria pushed across all three of their runs.

What started with a Noah Mendlinger homer to tie the game ended with an LJ Jones triple to put the Chiefs in front 3-1. The Cubs continued to play long ball in the seventh, with Fabian Pertuz making things 3-2, but that would be it for South Bend. The Cubs had just four hits, with Jonathan Sierra and BJ Murray Jr joining Pertuz and Nwogu.

PCA has a double and a run scored in the Futures Game at Dodger Stadium! pic.twitter.com/zfkP5v2zLX

What started as a rough week has improved as the Pelicans have taken three straight to seize control. Pitching set the tone in this one as Porter Hodge was filthy. Despite going just four innings, Hodge allowed just two hits and struck out 10. That means of the 12 outs he recorded, 10 came via the strikeout as the Pelicans had 19 strikeouts as a team.

Despite not qualifying for the win, the Pelicans did give him plenty of support, with three runs coming in the second. Juan Mora opened the scoring with an RBI forceout, while the Kevin Alcantara single mixed with a walk made things 3-0.

It wasn't until the sixth when Fayetteville got on the board as Miguel Palma homered to make things 3-1. Palma would add a double in his next at-bat to keep things close, with Fayetteville now down 4-2.

The Pelicans put the game away in the eighth when Mora ripped a two-run double ahead of the Kevin Made single for another big win. Mora, Made, and Matt Warkentin had two hits for the Pelicans, with Mora driving in three.