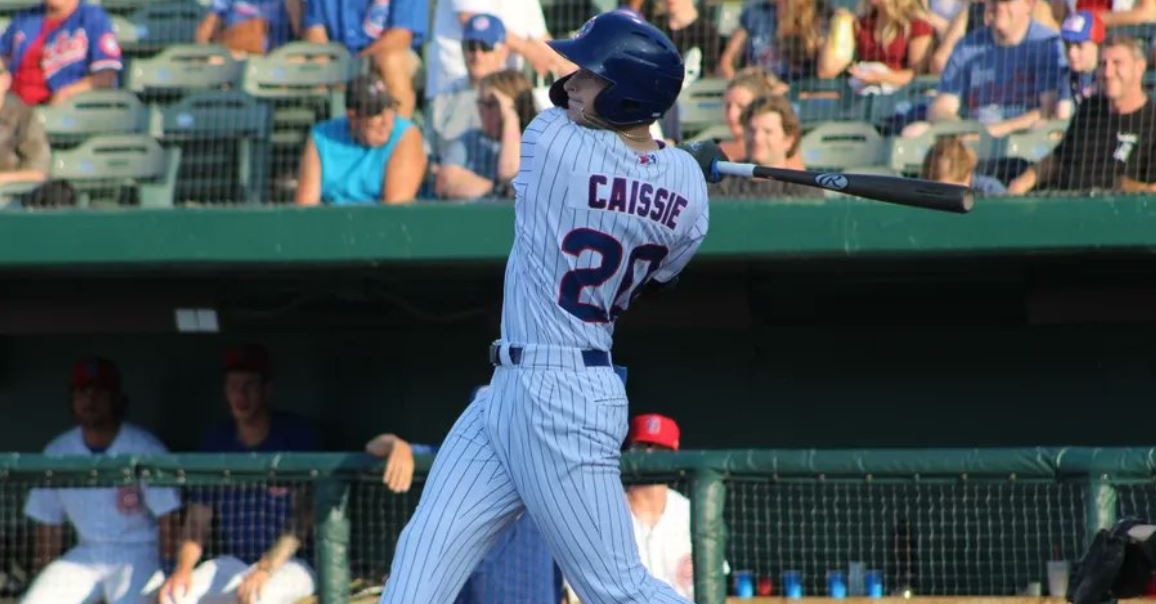 Caissie is one of the Cubs top prospects (Photo courtesy: Kayleigh Sedlacek)

After a bit of a rough patch to close out the first half of the minor league season, things have been looking up to start the second half. Not only are teams like Myrtle Beach and South Bend contending for the top spot, but Tennessee is starting to get back on track as all four full-season teams won again on Thursday.

Granted the Rookie League results were not what the Cubs wanted, the perfect record for the full-season teams was enough to give them another winning night. Should this play continue, there will be multiple playoff teams to follow this season.

Despite all their runs coming in a three-inning stretch, it was more than enough for Iowa as their pitching took care of the rest. It took over a month, but Cam Sanders earned his first career AAA win by giving the Cubs five innings of two-run ball.

He handed things off to a bevy of relievers including Daniel Norris who worked a scoreless inning of relief in his first rehab outing. Also out on rehab is Nick Madrigal who gave the Cubs a 1-0 lead in the third with an RBI groundout. Not only did the Indians tie things up in the bottom of the third, but the teams exchanged runs in the fourth to keep things tied 2-2.

It was in the fifth when the Cubs offense finally started to show signs of life. The Dixon Machado single is what put the Cubs in front for good before Narcisco Crook and his single proved to be the game-winner. Darius Hill would also add a single in that inning as four runs came across to score to give the Cubs a 6-2 lead.

They would end up winning 6-3 with the Indians pushing a run across on the Mason Martin single in the ninth, but they now lead the series 2-1. Madrigal went 1-3 with an RBI on his rehab assignment as he is itching to rejoin the big league team. Crook added a hit, but it was Greg Deichmann and Trent Giambrone who led the way with two hits.

Since the start of the second half of the minor league season, the Smokies have been playing much better. They continued that trend on Thursday with an all around team win. Chris Clarke was back in the starting rotation and gave the Smokies five scoreless innings to pick up the win.

Max Bain, CD Pelham and Danis Correa relived him out of the pen with Correa earning his second save of the season. Most of the Smokies damage came in the first three innings and sometimes that is all you need to win. Bryce Ball put the Smokies in front for good with an RBI single in the first before the two-run Matt Mervis single in the second extended the lead to 3-0.

The Smokies offense didn't stop there with Alexander Canario going yard for the 11th time in the fourth as Tennessee built their lead to 4-0. That would be the last of the runs until the sixth inning when Bryce Windham connected for a home to make things 5-0.

The Barons offense was held in check through six innings, but managed to put an end to the shutout in the seventh when D.J. Burt picked up an RBI double to make things 5-1. Canario would add an RBI double in the ninth before coming home to score on the Cole Roderer single to add some insurance before winning 7-2. Mervis and Ball had three hits with Canario adding two.

These two teams are expected to battle it out for the second-half crown and if this game is any indication of what is to come it will be fun. Trailing 6-4 in the ninth inning, it was the Cubs who came through when they needed as they pushed across four runs to deliver an 8-6 walkoff win.

Despite still searching for his first win, Kohl Franklin continues to improve on the mound allowing just two runs across four innings. Only one of those runs were earned to go with six strikeouts in what was a solid outing. Those runs came in the first inning when Tristan Peters brought home the game's first run with an RBI triple. Peters would come home on the play via a throwing error to make things 2-0.

Following Franklin and his outing, Michael McAvene pitched another scoreless frame and is starting to settle in nicely since returning from his 2020 injury. He kept the Cubs in front until the Albert Cipion double gave the Rattlers a 4-3 lead in the sixth. Joe Grey Jr would add a homer in the seventh to extend the Wisconsin lead to 6-3, but it was only a matter of time until the Cubs offense got things back in gear.

A Yohendrick Pinango double in the seventh helped by bringing things to within 6-4, but it was the ninth inning when the real fireworks began. Trailing by two at that point, all it took was one swing of the bat to win the game as Owen Caissie crushed a walk-off grand slam to right field and lifted the Cubs to a huge 8-6 win.

Owen Caissie's last swing as a teenager... a 2-out, walk-off grand slam!
A @hoosierlottery home run none of us will ever forget! pic.twitter.com/7YmXxKBqrb

The walk-off hero Owen Caissie on the field after the game with @BKingSports pic.twitter.com/5K1YPJccNL

Although this game was suspended and has yet to be finished, you had the Pelicans dominating through five. Led by Luke Little and Tyler Santana, who allowed just one hit through four innings, it was the Pelicans' three-run fifth that saw them open the game before the rain arrived.

A Kevin Made single in the first gave Myrtle Beach the early lead as they only continued to build off that. It wasn't until the fifth when the next runs scored as Jacob Wetzel connected for a solo shot ahead of the Kevin Alcantara single to make things 4-0. That is where things stand and will pick up when this game resumes.

For the first time in a while, the DSL Cubs Blue squad received a strong pitching performance. Unfortunately, the offense couldn't match that performance as the Cubs fell 2-1 in eight innings.

Gabriel Agrazal continued to make a statement on the mound, giving the Cubs four scoreless frames to lower his ERA 0.72. He managed to keep the game scoreless through four until Dyron Campos put the Mets in front 1-0 in the top of the fifth. The Cubs wasted little time finding an answer with Luis Maza picking up a sacrifice fly to tie things up 1-1. That score would hold until extra innings when Jeffry Rosa delivered the game-winning RBI single for the 2-1 win.

Unlike DSL Blue where pitching stood out, it was the offense leading the way for DSL Red only to have them get walked off in the end. With the Cubs leading 1-0 in the fourth, the Angels offense came to life as they pushed across four runs to take the 4-1 lead.

The next inning saw the Cubs take their turn in having a big inning with Julio Valdez starting things off with an RBI single before a balk made things 4-3. With a costly error bringing things back to even, Offerman Hernandez capped off the big frame with an RBI double that had the Cubs in front 6-4.

That lead didn't last long with the Angels responding for three runs in the bottom of the fifth to retake the lead 7-6 before Erbin Jaque tied things up in the sixth with an RBI groundout. Still tied in the ninth, Josias Ramirez came through with a clutch RBI single, helping to put the Cubs back in front 8-7. However, it was the Angeles getting the last laugh as a wild pitch mixed with the Randy De Jesus RBI single lifted them to a 9-8 walk-off win over the Cubs.