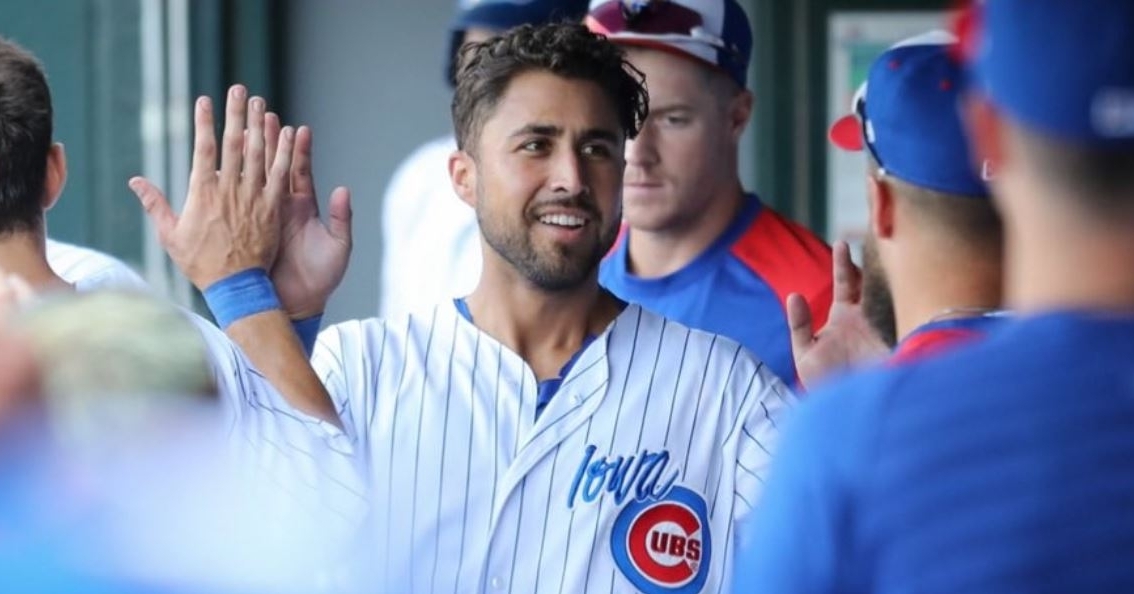 Rivas had three hits in the loss (Photo via Iowa Cubs)

Another night and another tough night for wins as the Cubs have struggled recently. While the pitching was pretty solid across the board, it was the offense that wasn't consistent enough as the Cubs limped away with a 2-5 record.

Sometimes, the final score can be deceiving, which was the case here. Take away the five-run inning by the Bats, and it was the Cubs who dominated this game, but couldn't put much together when they needed it the most.

Two starts into his Cubs career, and Hayden Wesneski is looking for his first win. Although his second start was much better than his first, he still allowed four runs in four innings, which will not get it done. With the game tied entering the fourth, Iowa finally broke through to give him support, with Frank Schwindel picking up an RBI double while the Jared Young groundout made things 2-0.

That lead didn't last long for the Cubs as the Bats got their offense rolling in the fifth. Not only did RBI hits from Chuckie Robinson and Isiah Gillham tie things up, but the Lorenzo Cedrola double proved to be the game-winner and put the Bats up 4-2. Louisville capped off their massive inning with an RBI groundout and led 5-2. Iowa did their best to stay close, with Young picking up an RBI double in the sixth, but that would be in the 5-3 defeat. Alfonso Rivas led the way on offense going 3-3 with a walk.

Still a chance for the series split tomorrow afternoon! pic.twitter.com/dhTsoEIOMT

Talk about a complete polar opposite of games in 24 hours. One night after falling to the Braves 16-14, the Smokies were locked into a pitcher's duel where they came out on top 1-0.

Ryan Jensen is starting to come into his own in recent starts as the right-hander picked up his second win. Across five innings, Jensen struck out seven and kept the Braves off the board. He gave way to Bailey Horn, who registered six punchouts in three innings of relief, while Hunter Bigge picked up the save.

All the Smokies would need was one run of offense, which came in the second inning with Chase Strumpf delivering the game-winning RBI single. Strumpf joined Bryce Ball and Delvin Zinn as the Smokies had three hits in the win.

We are now 17 games into the 18-game season series, which has been as evenly matched as possible. Following the 5-1 win for Wisconsin on Saturday, the Timber Rattlers move to 9-8 this season, with the finale coming on Sunday.

Despite allowing four runs in his five innings of work, Richard Gallardo's line looks way better than that, as he allowed just one earned run with three strikeouts. He gave way to Sheldon Reed, who struck out five in two innings of work, with Brad Deppermann seeing action out of the pen.

Most of the damage came in the third inning when Wisconsin pushed across three runs to take a 3-0 lead. Eduardo Garcia delivered the game-winning two-run shot, while Jose Acosta added a solo shot later in the inning. Jackson Chourio extended the lead to 4-0 in the third with another homer, and Wisconsin didn't look back.

Following his five RBI night, Luis Verdugo ended the shutout with an RBI groundout in the sixth while Wisconsin added another run late. South Bend had just four hits in the loss as BJ Murray Jr, Jordan Nwogu, Verdugo, and Owen Caissie had hits.

As the losses continue to mount for Myrtle Beach in the second half, you have to wonder if the luck of this time has run out. Despite struggling to win games in the second half with another one-run loss, this is a playoff team that wants a quick reset for the rest of the way.

Koen Moreno had a start to forget as the right-hander didn't even make it out of the first inning, allowing three runs and four walks. Thank you, Chase Watkins, who came in to relive Moreno and then went on to pitch 5 1/3 innings of scoreless ball. Not only did Moreno walk in a pair of first-inning runs, but there was an RBI single from Carter Jensen mixed in there as the Pelicans trailed 3-0 early.

Given the effort from Watkins in relief, the Pelicans offense had an opportunity to come back and started that with a Kevin Alcantara homer in the bottom of the first.

Add in the Alejandro Rivera homer in the third to pull within 3-2, and it was Ezequiel Pagan tying things up in the fifth with an RBI single.

Get you a Bird that can do it all. pic.twitter.com/f2MZavo8dV

Not only would that be the final run of the game for the Pelicans, but after being held scoreless for nearly seven innings, Columbia took the lead for good in the eighth. Just like in the first, it was a bases-loaded walk that did the damage, with Lizandro Rodriguez taking the bases-loaded walk to push the winning run across. Alcantara led the way with three hits from the leadoff role as the top four hitters combined for nine hits. Parker Chavers, Pagan, and Josue Huma all had two hits.

Don't look now, but the ACL Cubs are playing great baseball and are inching closer to .500. Despite allowing a five-run inning, their offense was up to the task as they did what they had to do to hold off the A's.

Chris Kachmar made a start and lasted just one inning, but Manny Rodriguez continued to impress. Over his two innings, Rodriguez allowed just three hits with four strikeouts before handing things off to Kenyi Valdez and the rest of the Cubs pen.

Not only did the Cubs strike for a pair of second-inning runs, but they added another in the fourth as the Christopher Paciolla single gave the Cubs a 3-0 lead. That was when the Athletics offense went to work erasing that deficit with a five-run frame, anchored by a trio of RBI singles to take the 5-3 lead.

Now in catchup mode, the Cubs pulled even in the fifth before falling behind 7-5 entering the final inning. It was in that inning that Miguel Pabon had the biggest hit of his season as his three-run shot gave the Cubs an 8-7 win. Pabon had just that one hit, but also had a sacrifice fly to lead the way with four RBIs. Reggie Preciado, Miguel Fabrizio, Ismael Mena, and Frank Hernandez all had two hits, while Cristian Hernandez went hitless.

The Cubs also both DSL teams came away with losses as DSL Red fell to the Red Sox 10-6 and DSL Blue falling to the Dodgers 8-5.