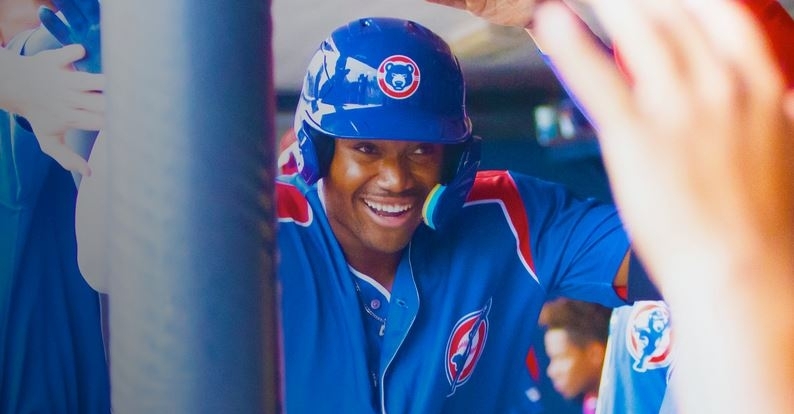 South Bend clinched a spot in the Midwest League Playoffs

It was a light night on the diamond Saturday as two postponements led to only two games being played. Despite the Cubs posting an 0-2 record, it was an overall great night as the South Bend Cubs clinched a Midwest League playoff spot, and Tennessee dropped a game off their magic number with a Birmingham loss.

Today’s game against Columbus has been postponed. We will play a doubleheader tomorrow with game one starting at 10:05 AM CT. https://t.co/pscgVJSb5E

Despite their loss on Saturday putting an end to their long home winning streak, South Bend made it two teams in the playoffs for the Cubs organization. With Beloit also losing on Saturday night, the Cubs clinched the second-half title with seven games to go and can now focus on the Midwest League Players for the first time since winning the title in 2019.

This series has been about excellent starting pitching for South Bend, but Richard Gallardo suffered a rare rough night on the mound. Not only did he walk three and allow six hits in three innings, but Gallardo was tagged for eight runs which is never good. However, one of the silver linings was that only three runs were earned as the Cubs defense didn't help him out too much.

Gallardo was given an early lead in the first inning when Luis Verdugo connected for his 27th double of the season to put the Cubs in front 1-0. The problem was that Lansing erased that deficit in the next inning and did so by putting up a massive crooked number. With a Brayan Buelvas fielders choice tying things up on an error, it was that error that proved costly.

That opened the flood gates to four more runs, all coming off the Cooper Bowman grand slam to put the Lugnuts in front 5-1. Not only was this a rare lead for Lansing in this series, but to have such a big lead this early was a surprise, and they continued to add to it.

RBI singles from Denzel Clarke and Hanson Lopez pushed across three more runs as South Bend was down big 8-1 in the third. Give the Cubs credit, yes, this was not a great start to the game, but they did a phenomenal job battling back, which started in the bottom of the third when the Jordan Nwogu RBI triple and Verdugo groundout made things 8-3.

Trailing 9-4 in the sixth, BJ Murray Jr pulled the Cubs to within 9-5 with his homer, only to see the Lugnuts push home another run off the Shane McGuire single in the eighth. Down five and with only six outs to work with, South Bend made a furious charge late only to come up short as Nwogu picked up another RBI in the eighth while the Yeison Santana single in the ninth made things 10-8.

That would be as close as the Cubs would get as Pete Crow-Armstrong struck out to end the game. Santana, Nwogu, and Crow-Armstrong all had two-hit games, with Nwogu, Santana, and Verdugo having multi-RBI showings.

Although the best the Pelicans can do this weekend is earn a split, you have to like how they played against the Leagues best. When you look at how rough the second half has been, this has to be a bit of a confidence booster for them, with the postseason just over a week away.

With their new ace Didier Vargas on the mound, the Pelicans were looking to give the lefty another win as he has pitched so well this season. Although not his best start, Vargas still gave the Pelicans six innings of work where he struck out seven and allowed four runs. He left with the lead only to see Anthony Mendez allow three runs in two innings to give the Riverdogs the win.

Both teams exchanged runs in the first inning, with Moises Ballesteros grabbing a sacrifice fly and Shane Sasaki a homer, but the Pelicans were looking to pull away in the third. On the strength of the Ballesteros RBI groundout and the Ezequiel Pagan single, Myrtle Beach pushed across two runs to take a 3-1 lead and then added another off a fifth-inning single by Pagan.

Brock Jones would take Vargas deep in the bottom of the fifth to make things 4-2, but another run by the Pelicans in the sixth kept Myrtle Beach comfortably in front 5-2. That was when the game started to change, with Charleston finally getting to Vargas more consistently in the sixth.

Homers from Sasaki and Junior Caminero not only pulled the Riverdogs to within 5-4, but it got Vargas out of the game after that inning and forced Buddy Bailey to go with Mendez. That immediately paid off with Drawer Castellanos tying things up with an RBI single in the seventh to make things a brand new ball game.

Charleston capped off their comeback bid in the eighth inning off Mendez when Jones unloaded for his second homer of the game to make things 7-5 as the Pelicans went down in order in the ninth to seal their fate. Ballesteros and Pagan led the way with two RBIs each, with Pagan also connecting for two hits. He was joined by Pedro Ramirez, who continues to show his overall hitting skills with a .350 average since his promotion.