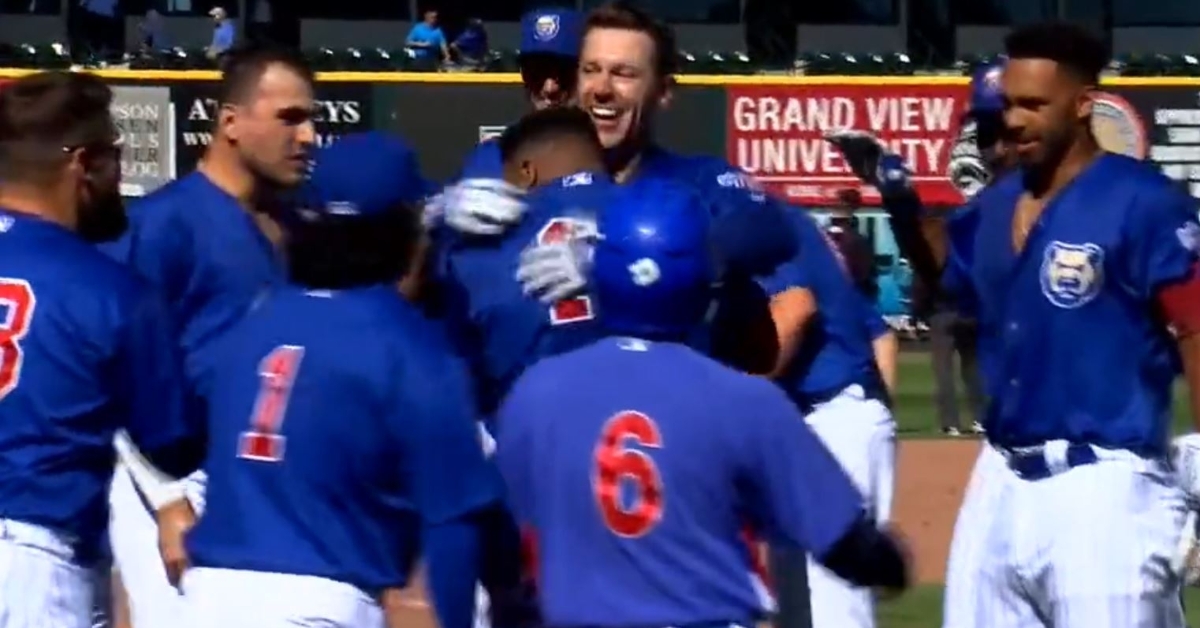 The 2022 Minor League season officially ended on Wednesday, with the Cubs organization playing in their final two contests. Granted, only one team had a meaningful game with Tennessee playing for the Southern League title, it was still nice to Iowa end the season at home and send the fans home happy.

The 2022 season was a struggle for the Cubs as they finished their campaign 68-81. They were the only team in the minor league system not to make the playoffs, but despite that, the future is very bright for Iowa. With the other three teams in the organization making the postseason and two playing for the title, those players will get to Iowa soon enough, leading to more future success.

Making his final start of the season was Caleb Kilian, as a critical offseason is set to begin for him. Granted, he didn't last long, going just three innings and allowing two runs, only one of those runs was earned as he added four strikeouts. He finishes the season with a 5-4 record and a 4.22 ERA and will now look at developing a third pitch to improve his arsenal.

Both of the runs Killian allowed came in the second inning when Dylan Rosa worked a bases-loaded walk to bring in the game's first run, while a passed ball doubled that lead to 2-0. Apart from that, the Toledo offense was held in check as the trio of Cayne Ueckert, Cam Sanders, and Kyle Johnson pitched six scoreless innings of relief and struck out nine in the process.

The Cubs managed to get one of those runs back in the bottom of the second when Brennen Davis unloaded for his fourth homer. That would be it until late in the game, as the Toledo pitching was just as good as the Iowa pitching. Still trailing by that 2-1 score in the ninth, the Cubs picked a perfect time to wake up their bats and gave the fans something to cheer about.

It all started with Alexander Canario tying things up with a solo homer as he finished the season as the organizational leader in home runs with 37, one ahead of his teammate Matt Mervis.

ALEXANDER CANARIO TIES IT! Home run number 37 on the year for the outfielder. pic.twitter.com/QASp0Inrd3

That set the stage for Jared Young, who returned from his recent MLB stint to deliver a walk-off two-run homer for his 17th and lifted the Iowa Cubs to the 4-2 walk-off win in their season.

JARED YOUNG WITH THE WALK-OFF WINNER TO END THE YEAR! pic.twitter.com/7ytm5uNH4a

Out with a bang! ?? pic.twitter.com/FPkbmaZSjP

The Smokies titleless drought will have to wait one more season as they fell to Pensacola 11-4 in the Southern League Championship game. The loss puts a fitting end to their season where the Smokies went winless at home in three postseason games. Even at that, the future is very bright as several players from South Bend played in this series, with more on the way next year.

One takeaway from this series is the future starting pitching for the Cubs could be special. One of those guys is Ben Brown, whom the Cubs acquired from the Phillies in the David Robertson trade. Brown would have gone deeper had it not been for a high pitch count, but he still gave the Smokies four innings of two-run (1ER) baseball with six strikeouts. He finished the season 6-5 with a 3.38 ERA, including 3-0 with a 4.06 ERA after the trade.

Brown was solid, but Eury Perez was on a different level where he struck out the first eight hitters of the ball game before ending the game with nine. Tennessee found themselves down early when Norel Gonzalez doubled home a run in the first inning before the Griffin Conine sacrifice fly in the third made things 2-0.

It was in the bottom of the third when the Smokies offense started to roll, and all the action came with two outs. What started with a bases-loaded walk to Yonathan Perlaza finished with a Nelson Maldonado RBI single as the Smokies took a 3-2 lead. Not only that, but this team scored in the third inning in all of their playoff games, as this was typically the inning that got them going.

All it took for the Blue Wahoos to put the game away was one swing, which came in the fifth inning when Cobie Fletcher-Vance delivered the knockout blow with a Grand Slam to make things 6-3. Vance would add an RBI single in the seventh mixed with a JD Osborne double as the Smokies were trailing 9-3.

Down 10-3 in the eighth, the Smokies were hoping the Cole Roederer solo shot would help bring the momentum back toward their side, but it didn't, as Tennessee fell 11-4 to end their season. Tennessee had six hits in the game, with Luis Vazquez and Roederer delivering two. Jake Slaughter and Maldonado added the other two as the Smokies begin their preparations for 2023.