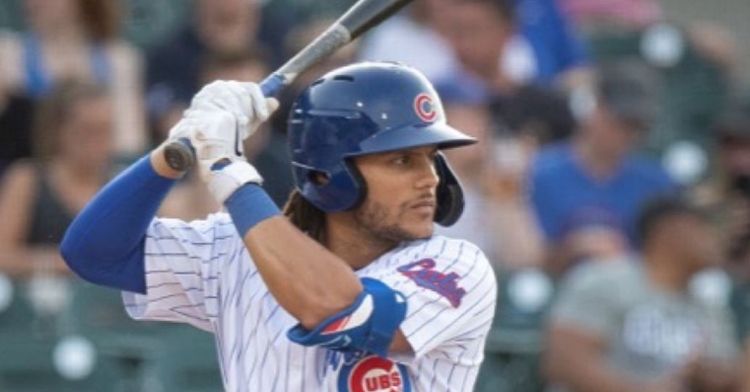 Friday was a hectic day on the diamond as all seven teams were in action once again. Add in that both DSL RED and DSL Blue had doubleheaders as part of an early week washout, and there were nine games to catch up on over 12 hours on the field. The result was a hard-fought 4-5 night, but with four wins, there is nothing to be ashamed about in a busy night on the field.

The lone full-season minor league team to capture a victory last night was Iowa, as they continue to have a great series. At worst, the Cubs have already earned a split, but are looking for more. Adrian Sampson got the ball for a start and delivered an impressive outing allowing just one run in 6 1/3 innings of work. If it weren't for Dillon Maples eighth-inning meltdown, he would have earned the win.

Sampson did a fine job navigating through this lineup, only allowing a third-inning RBI single to Bobby Witt as his lone blemish. With the Cubs trailing 1-0 in the fifth, Michael Hermosillo continued his scorching season as his three-run shot had the Cubs up 3-1. It is only a matter of time until he gets the call. The Cubs added to their lead in the sixth with a Trent Giambrone triple and, just like that, held a 4-1 lead.

The bottom eighth is when things began to change as Maples struggled to find his rhythm on the mound. Led by a pair of homers by Ryan McBroom and MJ Melendrez, the Storm Chasers climbed all the way back to tie things up 4-4. However, the Cubs had the last laugh using an Ian Miller ninth-inning double to take the lead before Tony Cingrani finished them off for the win. Miller joined Alfonso Rivas and Erick Castillo with two hits to lead the offense.

IAN MILLER!! Huge RBI double in the ninth to give us our third win of the series over Omaha! pic.twitter.com/NxzM2kspIu

After a promising start to the series, things are all tied up with the Trash Pandas doubling up the Smokies 8-4. Javier Assad got the start and didn't pitch terribly in his 5 1/3 innings, allowing four runs with only three earned. Unfortunately, he was on the losing end of that decision as the Smokies offense couldn't recover from a slow start.

While most of the attention is drawn towards Brennen Davis, Nelson Velazquez is the hottest hitter for Tennessee as he connected for his fifth homer in just nine games in the second inning to give the Smokies a 1-0 lead. That lead was short-lived, with Luis Aviles tying things up in the third with a double before the Mitch Nay

single, and Ray-Patrick DIdder's double gave the Trash Pandas a 4-1 lead in the fourth.

The Smokies were able to pull to within 4-1 in the fifth as Davis ripped an RBI single to left. Unfortunately, the Trash Pandas had answers for every RBI hit the Smokies, with Cristian Molfetta collecting the game-winning RBI triple in the eighth to put Rocket City up 5-2. The Smokies continued to make things interesting in the bottom of the eighth, with Tim Susnara picking up an RBI single ahead of the Christopher Morel sacrifice fly, and just like that, it was 5-4.

That would be all the offense they could get as Rocket City added three runs in the ninth to pull away. Only two other Smokies had hits outside of Velazquez, Davis, and Susnara, with Nelson Maldonado and Tyler Payne grabbing those.

Sparked by a big second inning, the Tin Caps were finally able to solve the Cubs, topping them 7-2. Chris Clarke had his worst start with the Cubs, surrendering four earned runs despite getting through five innings for the first time. All the runs he allowed came in the second inning, with the first of those runs coming on a bases-loaded walk. Adam Kerner would add a three-run shot later to put the Cubs in an early 4-0 hole.

Following that inning, the Cubs pitching was strong until Tanner Jesson-Dalton served up a two-RBI single to Chris Gavin in the sixth to put the Tin Caps in front 6-0. Although down by a ton, the Cubs never quit and were finally able to breakthrough in the eighth when Tyler Durna picked up a sacrifice fly to get the Cubs on the board. An error on the same play allowed two runs to score as the Cubs were within 6-2 before falling 7-2.

Cubs fall in Fort Wayne for the first time this series. pic.twitter.com/7j4puTKYBX

Since having their seven-game winning streak snapped on Wednesday, the Pelicans have now lost three-straight, including an 11-4 defeat Friday. Manuel Espinoza continues to be consistent on the mound giving Myrtle Beach four innings of three-run ball. Usually, that wouldn't be a bad outing, but when the offense struggles and the bullpen can't get it done, you're looking at another loss.

Early on, the Pelicans looked as if they would be in line for a big win with Pablo Aliendo putting them in front with a first-inning RBI single. In the second, Diego Infante tied things up with a homer only to see Abiezel Ramirez collect an RBI single for the lead. Following the Patrick Merino single in the fourth to put the Riverdogs up 3-1, Jordan Nwogu answered with a single of his own to pull the Pelicans within 3-2.

The back-and-forth affair continued in the fifth, with Infante and Alexander Ovalles collecting RBI singles to stretch the lead to 5-2. Aliendo answered that with another RBI single in the bottom of the fifth before Jacob Wetzel pulled them within 5-4. Unfortunately, that would be as close as things would get as Charleston scored six runs against the Pelicans bullpen in the final four innings to roll 11-4.

It is not easy to shut a team out in the ACL. Holding them to just two hits and completing a shutout is that much tougher, which is exactly what the Cubs did. Sparked by a five-run fifth, the Cubs used a solid six-inning start by Yovanny Cabrera to secure an 8-0 win.

Things looked as if it would be a pitcher's duel early, with Owen Caissie putting the Cubs in front 1-0 with an RBI single in the first. Two innings later saw Reggie Preciado connect for an RBI triple before coming home on the Flemin Bautista sacrifice fly to extend the lead to 3-0. At that point, the Cubs knew they needed more runs, but they never expected what they got in the fifth.

Preciado continued his already good game with a ground-rule RBI double in the fifth to extend the lead to 4-0. Caissie followed that up with a double before Kevin Alcantara tripled to make things 6-0. As if a three-run inning wasn't good enough, Yovanny Cuevas made it a five-run frame as his two-run triple capped off the massive inning with the Cubs leading 8-0. They would go on to win by that score.

In game one of a doubleheader against the Cardinals, the Cubs rallied late to take the lead only to see the Cardinals return the favor for the win. Starlyn Picardo went three innings and allowed a pair of runs as his ERA continues to be an impressive 1.29.

Yohan Crispin was impressive in his two innings of work, striking out three while not allowing a hit as those two kept the Cubs in the game.

After Brayan Altuve doubled home the first run in the first to give the Cubs a 1-0 lead, the Cardinals were able to draw even as a double steal tied things up. The Cardinals continued to make things happen in the third when Romtres Cabrera went deep for his third homer of the season for a 2-1 lead. That score held until the sixth, when both offenses went to work.

First, it was the Cubs offense going to work with Altuve picking up an RBI single to tie things up. Anderson Suriel followed that up with a clutch RBI double later in the inning as the Cubs pushed across three runs taking a 4-2 lead. Not to be outdone, Jose Rodriguez came through with an RBI double of his own as the Cardinals drew even 4-4. The Cardinals would later capitalize on a Cubs error to bring across the winning run, and they sealed the deal 5-4.

Sparked by a massive five-run first inning, the Cardinals never looked back as they were able to sweep the Cubs in Friday's doubleheader. The Cardinals indeed came out swinging the first Francis Reynoso delivering the first RBI hit ahead of a pair of RBI doubles by Jeremy Ramos and Felix Taveras to take a 5-0 lead after one.

One inning later saw the Cubs start to chip away at that lead with Samuel Duarte connecting for an RBI double of his own before a wild pitch made things 5-2. Add in a Pedro Ramirez sacrifice fly later in the inning, and the Cubs were down 5-3.

Still leading by two, the Cardinals were able to extend their lead in the fifth when Reynoso picked up his second RBI hit of the day using a two-run double to push the lead to 7-3. A Taveras singled in the seventh brought home the game's final run as the Cardinals capped off a doubleheader sweep 8-3.

Just like DSL Red, DSL Blue had some early week washouts and returned to the diamond on Friday for a double-dip with the Red Sox. In-game one, the Cubs rode a strong pitching performance from Samuel Rodriguez and company while the offense needed just one inning to get things done.

With Rodriguez lowering his ERA to 2.29 following three shutout innings of work, the offense backed him up with three runs of support in the third. Early Tatis opened the scoring with a single to left before Frank Hernandez provided the game-winning knock with a two-run double to push the lead to 3-0.

The Red Sox were able to get one of those runs back in the fourth when Ronny Ramirez tripled home a run to pull within 3-1 before adding another run in the seventh.

Much like game one, game two was dependent on pitching, in which the Cubs continued to have the upper hand. Led by a quartet of arms, the Cubs were able to limit the Red Sox to just one run as they did just enough offensively to sweep the Doubleheader.

The first of the Cubs runs came in the first inning when Cristian Hernandez delivered another sacrifice fly for the 1-0 lead. It took five innings for the Red Sox to respond, but with the help of a wild pitch on a potential third strike, the Red Sox were able to pull even 1-1. Wasting little time, the Cubs managed to take the lead for good in the final at-bat, with Jerry Torres connecting for an RBI double to provide the difference.