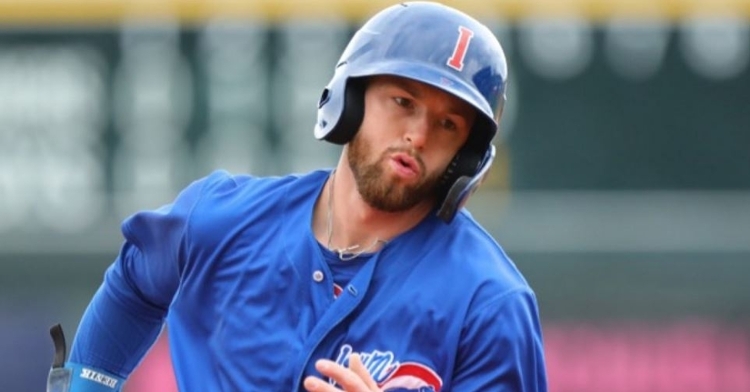 Giambrone had two doubles and a walk in the I-Cubs loss (Photo courtesy: Iowa Cubs)

Not only have wins been hard to come by for the Chicago Cubs, but wins were hard to come by on the farm last night as the system went 1-4 on the evening. South Bend was the lone team to come away with a victory, and even at that point, it wasn't easy.

Given the current state of the MLB franchise amidst the losing streak they are in, the minor league system will be interesting to follow to see how many players get called up or shuffle through the system. For now, fans can continue to monitor the progress as their seasons continue.

Despite putting together nine hits, the Iowa Cubs didn't stand much of a chance as the Saints made quick work of them 11-1. In what would have been Trevor Williams start had he not been called up, Mike Hauschild took the ball again for Iowa, hoping to build off a great last two starts. Instead, the Saints jumped on him early, chasing him in 3 2/3 innings after pushing across seven runs off him.

A Keon Broxton solo homer in the third put the Saints on the board before their offense came to life in the fourth. Mark Contreras got that inning started with a two-run shot of his own before Jimmy Kerrigan added a solo bomb to make things 4-0. Add in a fielding error, and a two-run Drew Maggi single, and Saint Paul pushed across six runs to bust the game wide open 7-0.

That 7-0 lead grew to 8-0 in the fifth on a JT Riddle single before Brent Rooker and Willians Astudillo added RBI singles in the eighth to make it 11-0. The Cubs were held scoreless until the ninth inning when Michael Hermosillo put an end to that with an RBI single. Iowa still fell 11-1 to kick off another week with a dud performance.

Hermosillo continues to have a fantastic season, adding two hits with that RBI as he is now hitting 344 this season. It is only a matter of time before he gets the call. Trent Giambrone added two hits, while five others picked up one in the loss. Dee Strange-Gordon made the news earlier in the day, opting out of his minor league deal with the Cubs to become a free agent once again.

Tonight was not our night. pic.twitter.com/lquEYAI5MV

After a strong showing against Rocket City last week, the Smokies struggled to get much going in the early stages, falling to the Lookouts 7-3. Erich Uelmen got the as his bumpy ride of a season continues. Uelmen lasted just 4 1/3 innings and was rocked by allowing seven runs.

The Lookouts not only struck early, but struck often as they had all seven runs before the fifth inning was over. Down 1-0 in the second, Braxton Lee pushed the lead to 3-0 with a single before TJ Hopkins extended the lead to 5-0 in the third with a two-run shot. The Lookouts continued with their offensive barrage in the fifth using a Hopkins triple and wild pitch to take a commanding 7-0 lead.

While the offense couldn't get anything done the first six innings, they started to show signs of life in the seventh, with Brennen Davis connecting for an RBI double before later coming home on a balk. Davis wasn't done with his strong performance, as he added a second RBI double in the ninth to cap off the scoring for Tennessee, which resulted in a 7-3 defeat.

Davis has been on quite a tear recently, picking up three hits to go with both RBIs as he is hitting a 268 on the season. The Smokies collected three more hits in the game with Jared Young, Nelson Maldonado, and Darius Hill with one hit each. Christopher Morel and Chase Strumpf went hitless in the loss.

Take your pick ladies and gentleman, we have two #wallpaperwednesdays for you this week thanks to @KNOXDOUGH. pic.twitter.com/tpdilK0BvK

The offensive support they were looking for came immediately in the first inning when Bradlee Beesley picked up an RBI double before coming home on the Grayson Byrd single. After Bubba Hollins pulled the Snappers within 2-1 with a solo homer, Nelson Velazquez returned the favor as his recent power surge had the Cubs in front 3-1 with his 11th bomb of the season.

Down 3-1 in the fifth, the Snappers offense began to take over, with Connor Scott pulling the team within one with an RBI single. One inning later saw Griffin Conine go deep for his 18th homer of the season, and just like that, Beloit had a 4-3 lead. The Cubs wasted no time tying things up in the bottom of the sixth as Jake Slaughter picked up a clutch RBI single.

Beloit had answers of their own in the seventh, using a wild pitch and a Thomas Jones sacrifice fly to put the Snappers in front 6-4. After an Edmond Americaan single pulled the Cubs within 6-5 in the eighth, it was up to the offense to come through in the ninth. That they did as Yonathan Perlaza tied things up with a sacrifice fly. With runners on the corners and two outs, Byrd came up clutch as his single lifted the Cubs to a walk-off 7-6 win.

Byrd and Velazquez had great days for the Cubs, as they combined for six of the teams 14 hits to go with three RBIs. Delvin Zinn added a much-needed multi-hit game from the leadoff spot, with Slaughter adding a pair of his own from the bottom of the order. Perlaza was the lone player without a hit in the lineup as South Bend was plenty ready for the Snappers.

There wasn't a ton of pitching throughout the system Tuesday, but the Pelicans delivered a strong performance. DavidJohn Herz got the start and lasted just three innings. Despite striking out four, Herz allowed two walks and was charged with all three runs as his outing wasn't as crisp as the past.

Two of the three runs Herz allowed came in the second inning as the long ball played a part in that. Willie Carter struck first, giving the Greenjackets a 1-0 lead, followed by Stephen Paolini and his homer as the Greenjackets led 2-0. The Paolini homer happened to be the winning run as the pitching was strong on both sides.

Looking to get on the board in the third, Ed Howard delivered an RBI single but was thrown out trying to advance to second. The run still counted as Myrtle Beach trailed 2-1. Carter capped off the scoring for both sides in the bottom of the third as his RBI single made things 3-1 in favor of Augusta. The rest of the game was all about pitching, notably Jarod Wright, who was phenomenal in relief. Wright lasted four innings and surrendered just one hit to go with four strikeouts, but the Pelicans still fell 3-1.

The Pelicans were only able to collect four hits, with Howard responsible for two of those four from the leadoff spot. Luis Verdugo collected the other two hits from the nine spot as those two were the only ones doing anything. Jordan Nwogu, Yohendrick Pinango, and Kevin Made all went hitless.

After a 4-1 start to their season, the Cubs have hit a bit of a rough patch, dropping their second straight game 13-7. Most of the pitchers struggled last night outside starter Luis Devers who allowed one run on three hits in three innings to go with five punchouts.

After Trevor Boone connected on his second homer of the season to give the Rockies a 1-0 lead, Matt Burch tied things up 1-1 in the bottom of the second with an RBI double to center. A Cam Balego double followed by a Felix Stevens single in the third gave the Cubs a 3-1 lead, but that lead was short-lived as the Rockies came to play in the fourth.

In total, the Rockies pushed across six runs in the top of the fourth as they took a 3-1 deficit and turned it into a 7-3 lead. Miguel Fabrizio worked a bases-loaded walk in the bottom of the fourth to pull within 7-4, only to see Francisco Ortiz added an RBI triple in the fifth to pull in front 9-4. The Rockies added four more runs the next several innings as they took a commanding 13-4 lead.

Like most teams with plenty of firepower, you can only keep their offense down for so long, and the Cubs began to come back in the seventh. Burch connected for his second RBI hit of the game using a ground-rule double to push another run across. Reggie Preciado added an RBI single with the bases loaded as the Cubs trailed 13-6 and had the bases still loaded.

Looking for a big hit to pull things close, Ronnier Quintero grounded into a double play bringing home another run, but the brunt of that rally was killed, and the Cubs would fall 13-7. Burch and Preciado continued their impressive starts to the season, collecting three hits each as both are hitting north of 400. Balego made his season debut and collected a pair of hits, as did Stevens, as those were the 10 hits the Cubs accounted for. Although Owen Caissie went hitless, he showed a great eye at the plate picking up three walks.