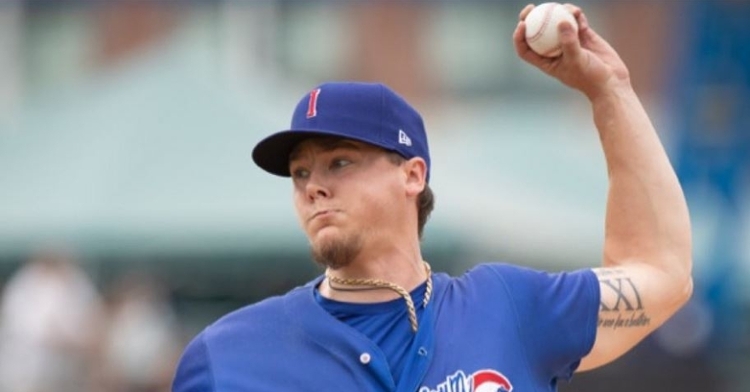 Sunday marked an important day for the Cubs organization as it was not only day one of the 2021 MLB draft, but the MLB Futures game took place. With two of their prospects participating in that game, Cubs fans caught a glimpse of what lies ahead in the coming years, while the draft signals a new beginning for this franchise.

There were still games to be played with all that going on, and the Cubs rolled to a 3-1 mark on Sunday. While most of the attention was drawn to Iowa, the amount of success the farm had this week was impressive and should be a positive step going forward.

In what was a scheduled doubleheader, the Cubs not only swept the Saints, but did so with strong pitching and timely hitting. Game one is the one that stands out the most as the Cubs made history in the process. With Justin Steele making a rare start, the Cubs were treated to an outstanding performance as the lefty tossed 3 2/3 hitless innings to go with two walks and five strikeouts.

Steele then gave way to Scott Effross, who fanned three of the four batters he faced keeping Saint Paul hitless through five before it was Dillon Maples turn to take the mound. Despite dealing with some command issues in his two innings of work, Maples kept the train moving as the Cubs no-hit the Saints through seven innings, but the score was still tied 0-0. That was until Trent Giambrone knocked home the game-winning run in the bottom of the seventh. His walk-off sacrifice fly not only gave the Cubs a 1-0, but it closed the door on the second no-hitter of the season for Iowa.

Walk off win ?
Securing the no-no ?

This memorable finish to game 1 of yesterday's double header is our @GreatClips Clip of the Home Stand! pic.twitter.com/yueJtbQIWS

As if game one wasn't exciting enough, the Cubs looked for the doubleheader sweep and completed it with their second walk-off win of the day. Pitching continued to set the tone for Iowa as Adrian Sampson delivered five strong innings on the mound allowing just two earned runs in the process. He gave way to Dakota Mekkes, and Ryan Mesinger as the two of them kept Saint Paul off the board when it mattered.

It took the Cubs seven innings to score in game one, but Michael Hermosillo wasted no time in game one picking up an RBI single in the bottom of the first to give the Cubs a 1-0 lead. However, that lead was short-lived as the Saints were able to pick up a pair of second-inning runs off Sampson. The first of those runs came off a Keon Broxton sacrifice fly before Jose Miranda gave the Saints the lead with an RBI single.

That score would hold up the rest of the game until the bottom of the seventh when the Cubs came to bat again. Singles by Vance Vizcaino and Andrew Romine got the inning started before Giambrone was hit by a pitch to load the bases with no outs.

That set the stage for Abiatal Avelino, who grounded a two-strike pitch up the middle for an RBI single, and the Cubs capped off the sweep 3-2.

You’re not having déjà vu, the @IowaCubs walked it off TWICE today.

Abiatal Avelino wins it for the Cubs in Game 2 of its twin bill. pic.twitter.com/2lpcrLdSEL

Avelino was responsible for two of the team's six hits, while Romine, Vizcaino, Alfonso Rivas, and Hermosillo had the rest.

On a side note, reliever Manny Rodriguez pitched in the Futures Game on Sunday, tossing a scoreless inning of relief to go with one strikeout. His fastball was clocked in the 99-100 range several times as he continues to impress.

For the second straight day, the Smokies had their game with the Lookouts postponed as the teams wait for the makeup dates. However, for those who follow the Smokies, you were aware that No. 2 prospect Brennen Davis participated in the Futures Game on Sunday. Not only did he homer once, but he homered twice in that game and took home MVP honors. He is going to be a fun player to watch.

The Cubs overcame an extremely slow start on Sunday, only to rally late and take the series from Beloit. With Matteo Bocchi on the mound looking to keep his string of strong starts rolling, Beloit had other ideas as the righty was chased after allowing four runs in less than an inning of work.

Griffin Conine started that first inning barrage with another homer before a Bubba Hollins sacrifice fly made things 2-0. Add in a Dustin Skelton RBI single, and the Cubs trailed 4-0 before even coming to bat. Despite that rough outing, Bocchi still has an ERA of 3.72, so he continues to show good work. Hoping to get back into the game, the Cubs used a Tyler Durna single and a Yonathan Perlaza RBI groundout to close within 4-2 after one.

One inning later saw the Cubs offense continue to battle back as Josue Huma picked up an RBI single bringing South Bend to within 4-3. Durna then added his second RBI hit in as many innings as the Cubs pushed across three runs in the second to take a 5-4 lead. That lead was extended to 7-4 in the fourth, with Huma picking up an RBI double in the third and the final run of the game coming home on a wild pitch in the fourth.

Held in check after the first inning, Beloit made things a bit more interesting in the seventh when Hollins connected for his third homer of the year to close the deficit to 7-6. South Bend wouldn't let them get any closer as Brad Deppermann settled down to toss a scoreless eighth before Eury Ramos secured his fifth save in the ninth to preserve the Cubs win.

The Cubs connected for 10 hits, with seven of those coming from the top three hitters. Delvin Zinn led the way with three hits, while Edmond Americaan and Durna added two. Huma also found himself with a two-hit game from the ninth spot while Ryan Reynolds picked up the 10th and final hit for South Bend. Nelson Velazquez was held hitless in the series finale.

While most of the system had a great showing on Sunday, the Pelicans didn't as they were held to just two hits in the 11-0 loss. Take away the five-run third and five-run sixth, and this was a very evenly played game, but it takes nine innings, and the Pelicans needed more support.

Following a scoreless first two frames, Augusta put the game away with their five-run third and never looked back. Cam Shepherd and Cody Birdsong collected RBI singles, but the three-run shot off the bat of Landon Stephens was the big blow in that inning.

A few innings later, the Greenjackets were at it again, using another five-run inning to take a 10-0 lead. Connor Blair and Shepard helped get that started with RBI singles, but the Pelicans did themselves no favors as a balk, and a wild pitch led to two runs. Cade Bunnell capped off that inning with a sacrifice fly and had Augusta rolling 10-0. The Greenjackets picked up one more run in the eighth off the bat of Bryson Horne as they made quick work of Myrtle Beach 11-0.

With just two hits, there wasn't a ton to get excited about as Kevin Made and Luis Verdugo had the hits. Flemin Bautista was able to work a walk out of the two-hole to give Myrtle Beach another baserunner, but not much else went right. Yohendrick Pinango and Jordan Nwogu went hitless.

We’ll be back at Pelicans Ballpark on Tuesday to begin the first series our 12-game homestand against Columbia.