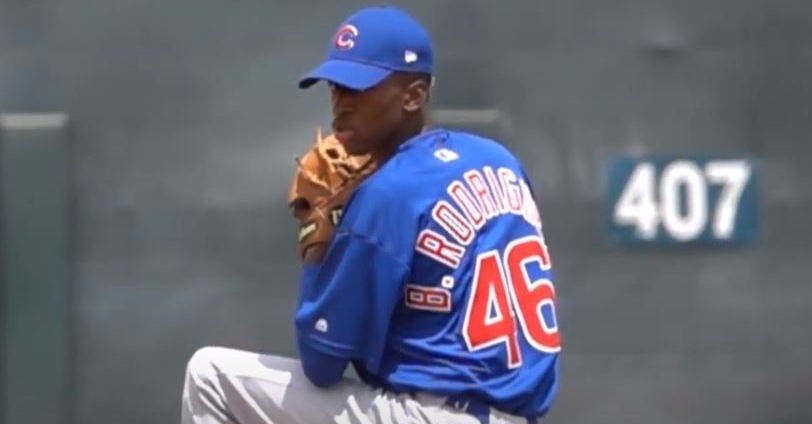 Rodriguez is a solid pitching prospect

Since Theo Epstein and Jed Hoyer took over this team, they have been trying to develop some form of home-grown pitching. While that hasn't gone according to planned quite yet, it appears some progress, or should I say help, is on the way.

We have already seen guys like Adbert Alzolay and Tyson Miller make starts this season, but only Alzolay appears ready to pitch in the bigs full time. You also have guys like Cory Abbott and Dakota Mekkes sitting in AAA, but neither one is ready to go this season.

In case you haven't been paying attention in recent weeks, the Cubs top prospect in the system is a pitcher by the name of Brailyn Marquez. The big hard-throwing lefty is known for his heater, which touched 102 last season with South Bend. Marquez didn't appear ready for at least a few years, but recent reports have him pitching out of the pen for South Bend in which he has been making hitters look silly.

Along with Marquez, you have guys like Ryan Jensen, Jack Patterson, Kohl Franklin, and Michael McAvene, all who are pitching in the lower level minor leagues right now. The Cubs franchise's future hinges on their arms as they will be the prized pitchers in the organization long term. While those may be the names we know, what about the name's fans don't know or players who are starting to come into their own.

The Cubs appear to have one of those players in right-hander Benjamin Rodriguez. The slender right-hander lost his minor league season with everyone else this year, which couldn't have been worse timing for him. Rodriguez was a slower developing pitching prospect in the Cubs system but was projected to pitch for the first time outside of rookie ball this season. At just 20 years old, he is still plenty young, so it isn't as if the Cubs are wasting his time.

Rodriguez was drafted as an international free agent signing in 2017 as a 17-year old arm. Upon the signing, the Cubs put him in the Dominican Rookie League, where he pitched for DSL 2, going 0-2 with a 7.11 ERA in eight games. His 18 walks and seven strikeouts were very alarming to see as that right there showed he was a long way away from being ready to contribute.

Following a brief showing in 2017, the Cubs moved Rodriguez to DSL 1 in 2018, hoping to improve significantly. Improvement made. In 15 games and 12 starts across the 2018 season, Rodriguez went 5-5 posting a respectable 4.31 ERA. His command also improved considerably as he walked 25 men and struck out 47.

2019 was the first time Rodriguez arrived stateside in the Cubs organization as he headed to Mesa to pitch for the AZL 1 Cubs as part of the Arizona rookie league. Not only did the improvement he showed the season prior carry over, but he looked the best he has looked to this date. Rodriguez saw action in 12 games, 10 of which were starts topping 50 innings.

His record may have been 2-3, but his 3.58 ERA was not only a career-best but pitching to that ERA in Arizona is an impressive feat given how balls fly out of the yard. His strikeout total was a little down with just 38, but his 17 walks are a career-low showing that Rodriguez continues to improve from one season to the next.

This was supposed to be the season in which Rodriquez got out of Rookie League and started to show the organization what he could do in minor league ball. At just 20 years old, he still has plenty of time to get things right, but losing this year of development will not help his cause.

Right now, there is no plan as to where Rodriguez fits with this team and the future, but given the improvements we have seen, you have to take notice. At 6-1 165 lbs., Rodriguez is very lean but should fill into his body as he adds strength. His fastball sits in the 91-93 range, but there is a chance we could see that touch 95 plus overtime.

His secondary pitches are a work in progress but does feature a changeup and a breaking ball that has a chance to be a plus secondary offering. Look for the Cubs to use him as a starter for the next couple of seasons before ultimately deciding where he fits long term. Rodriguez would have been a fun name to watch in Eugene and beyond this season. We now must wait one more year to see the strides he has made as a pitcher.