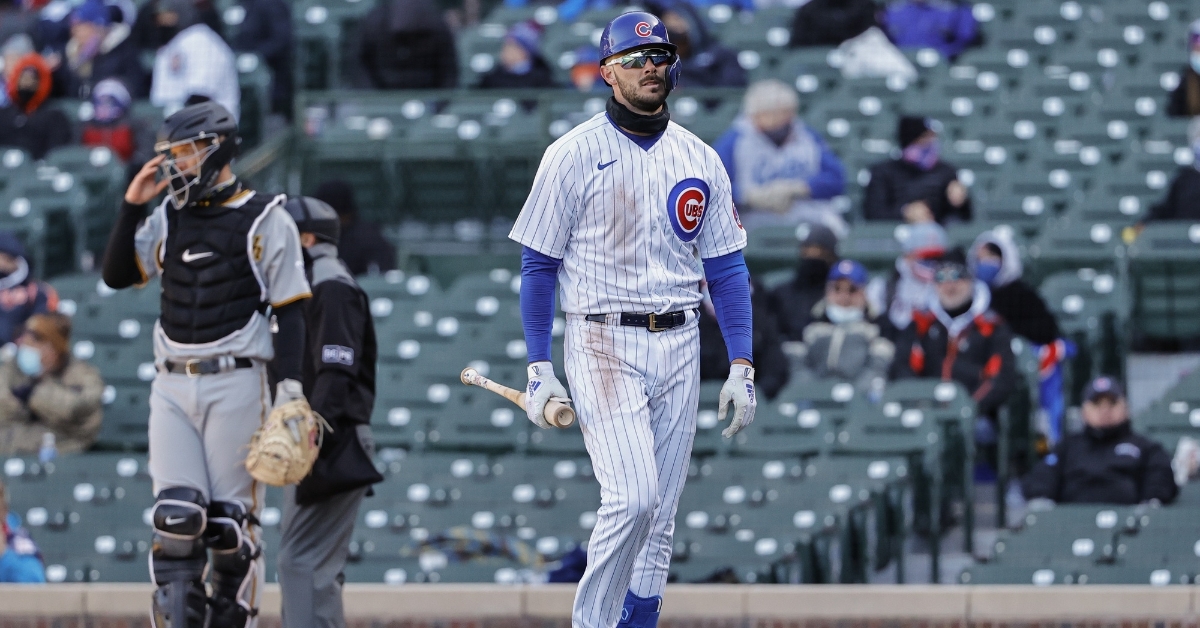 The Cubs were mediocre at the dish to open the 2021 season. (Credit: Kamil Krzaczynski-USA TODAY Sports)

CHICAGO — With fans in attendance at Wrigley Field for the first time since 2019, the Chicago Cubs (0-1) kicked off the 2021 slate with a resounding thud on Thursday. Kyle Hendricks started on the bump for the Cubs but did not fare well, lasting just three innings before getting pulled. The Pittsburgh Pirates (1-0) came away with the Opening Day victory, limiting the Cubs to just two hits and winning 5-3.

For the first time since March 30, 2019, the Cubs issued 10-plus walks on the afternoon, with the Buccos tallying 11 total free passes. The Cubs have walked 10 or more batters just seven times since 2015. The Pirates finished with nine hits, including a first-inning home run. They suffered two errors but made up for it with three steals. Pittsburgh was a shoddy 3-for-20 with runners in scoring position and left 15 stranded on base, but the Cubs were worse, striking out 13 times and going 0-for-5 with runners in scoring position.

Willson Contreras' baserunning was the highlight of the game for the North Siders. He stole a base and scored two of Chicago's runs by tagging up on sacrifice flies. Impending free agent Anthony Rizzo made his case for a new contract by slugging a double in his first at-bat. The opening-inning two-bagger marked the Cubs' lone hit until the bottom of the eighth. Hendricks struck out four but walked three. Chad Kuhl started three innings on the dirt for the Pirates and also walked three batters. However, he avoided giving up a run.

Hendricks walked the very first batter he faced before Ke'Bryan Hayes took him deep on a two-run shot to left-center. Ian Happ led off the bottom of the first with a walk, and Contreras then reached base via a fielder's choice. Rizzo's aforementioned double followed, sending Contreras to third, and a Joc Pederson sacrifice fly plated Contreras a few plate appearances later.

Opening it up with a statement. pic.twitter.com/1V0YcORYc3

The first two batters of the second reached base, and an Adam Frazier base knock scored Gregory Polanco with two outs. David Bote, who started at second, failed to charge a roller to lead off the third, but nothing came of it. While Bote was not charged with an error, Frazier was when he botched a grounder hit by Contreras in the ensuing half-inning. Contreras then stole second and reached third because of a throwing error committed from behind the plate by Jacob Stallings. Rizzo enabled Contreras to score by way of a sacrifice fly.

How about Jacob Stallings? pic.twitter.com/I0CCgZhwf3

With Brandon Workman toeing the rubber, Contreras helped out Anthony Alford by catching him in a pickle after Alford led off the fourth with a walk. A double steal came later in the inning, but Rex Brothers escaped the jam. Former Cub Duane Underwood Jr. pitched the bottom of the fourth fourth for the Pirates and struck out the side.

Stallings cranked an RBI double off Jason Adam in the fifth, bringing Colin Moran home. Frazier went on to hit an RBI double of his own in the seventh, scoring Alford with the extra-base hit off Dan Winkler. Cubs newcomer Eric Sogard led off the bottom of the eighth with a double hit into the right field corner and was ushered across the dish by a sacrifice fly off the bat Contreras soon afterward, but the Cubs never seriously threatened the Pirates' late lead.

Following an off day, the Cubs and Bucs will be back at it on Saturday, April 3. Righty Jake Arrieta (0-0, 0.00) will reintroduce himself to the Cubs faithful by starting on the mound against a Pittsburgh starter who has yet to be determined. The first pitch is scheduled for 1:20 p.m. CDT. The forecast at the Friendly Confines calls for a warm, cloudy afternoon with gusts reaching 17 mph.