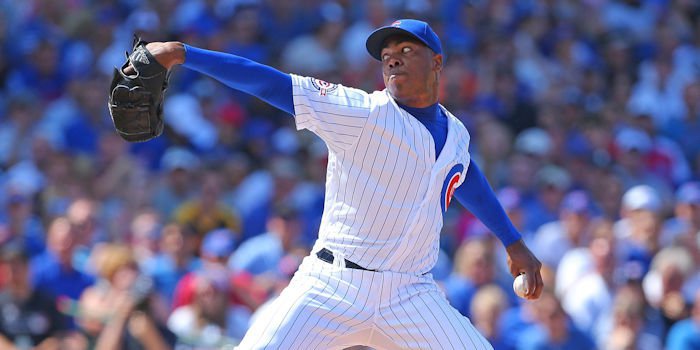 CHICAGO -- This weekend the Cubs were swept by the New York Yankees in a three-game interleague matchup. The Yankees came to Wrigley bringing with them a highly formidable bullpen, featuring former Cubs’ closer, Aroldis Chapman. It was Chapman’s first game back at Wrigley since game 5 of the World Series when he dominated the Cleveland Indians for an eight-out save, including four being recorded via the strikeout, forcing the series to move back to Cleveland. The return of Chapman not only played as an opportunity for the Cubs to honor the hard-throwing left-hander, but it also displayed a change in philosophy regarding the use of the bullpen from last season to this one.

Upon losing Chapman back to the Yankees through a five year/$86,000,000 contract this past winter, the Cubs went to work retooling this year's bullpen by adding multiple relievers who can get outs in the late innings. The Cubs first addressed the closer need by acquiring veteran right-handed closer Wade Davis from the Kansas City Royals in a trade for Jorge Soler. Davis, a World Series champion with Kansas City, was brought into the bullpen to pitch the 9th inning, which he has done very effectively to this point in the season.

Along with Davis, the Cubs signed former Boston Red Sox closer Koji Uehara. Uehara was added to the Chicago bullpen to get late-inning outs before they call in Davis. Uehara held a 2.19 ERA in his time in Boston, helping the Red Sox win the 2013 World Series. Davis and Uehara were brought into pitch with rising stars and returning relievers, C.J. Edwards and Mike Montgomery. Edwards, among the youngest pitchers in the Cubs bullpen, has been dominant in his short time in the majors and has the look of a future closer somewhere down the line. Montgomery, a 2016 trade deadline acquisition, has been used in his career as both a starter and reliever. Montgomery features a nasty curveball and recorded his first career save in game 7 of the World Series. Some other late-inning options which the Cubs have are Pedro Strop and former closer Hector Rondon. Strop and Rondon both had decent seasons last year before being sidelined with injuries late in the season. Neither pitcher was able to return to form in the playoffs, both struggling against the Indians, which manager Joe Maddon attributed to their overuse during the regular season. If Strop and Rondon can get healthy this season, they should prove to be key assets for a strong bullpen. By adding key pieces and hoping for the proper development of the younger relievers, the Cubs hope to have more options late in games than last season.

While there is no denying Chapman will be missed this season, the Cubs have attempted to lessen the blow of losing him through an increase of late-inning depth. The Cubs may not have a weapon to the extent of Aroldis Chapman with his tremendous frame and 105 mph fastballs, but they should show more depth and hopefully less fatigue down the stretch. Before the Chapman trade, the Cubs were pretty thin at the back end of their bullpen leading to the overuse of Strop and Rondon. Chapman as well, showed he was affected by the fatigue of the heavy workload as he allowed the tying runs to score in game 7 of the World Series after he’d thrown 62 pitches in the past two games. Along with adding more capable arms, the Cubs also have put a priority on adding pitchers who have thrown on big stages. Of the past four pitchers to record the last out in a World Series clincher, three are in the Cubs bullpen (Uehara 2013, Davis 2015, Montgomery 2016). As a team with hopes of making another deep playoff run, the Cubs have prioritized depth and experienced late-inning relievers instead of relying on one single rocket arm.