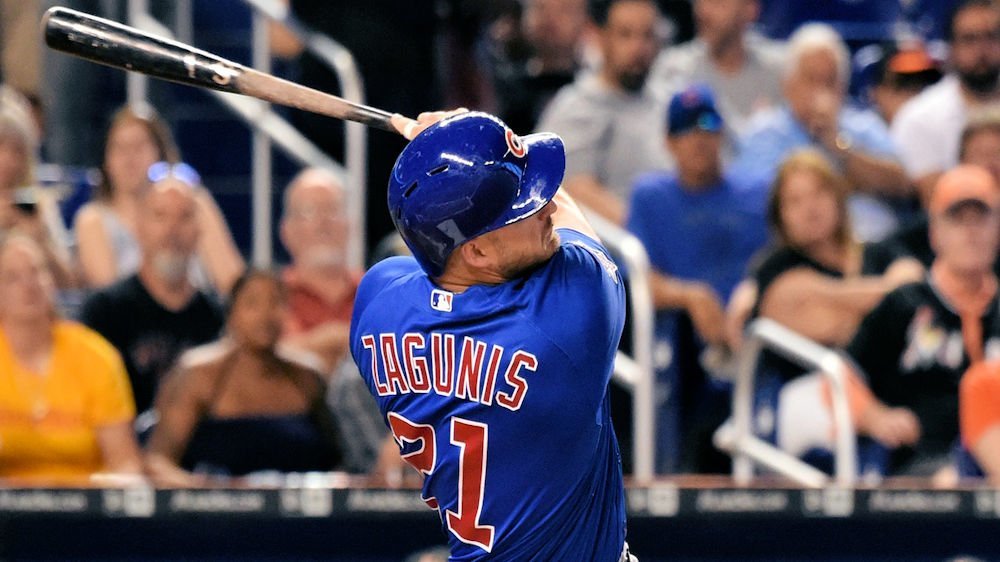 With two teams off on Monday, it was a rare quiet night for the Cubs minor league system. After going 2-1 in full season play, the Cubs had to settle for a 2-5 record as all four rookie league teams suffered lopsided defeats.

IOWA CUBS 10 – Tacoma Rainiers 1: The Cubs put together a complete performance at Tacoma on Monday moving to 61-53 with a 10-1 win. It was Matt Swarmer getting the call as he continues to improve as the season has gone on. Swarmer lasted 5 1/3 allowing 1ER on 8H to improve to 7-10 on the season.

Mark Zagunis opened the scoring in the top of the first with his 22nd double of the season and 1-0 Cubs lead. Tacoma wasted no time tying things up in the bottom of the second on a double of their own from Jaycob Brugman his 14th of the season. From that point on it was all Iowa as they ended the game with nine unanswered runs to seal the victory.

With the score still 1-1 in the sixth, Zagunis came through again to provide the winning hit as his fifth homer of the season made things 3-1 Cubs. A Johnny Field double and P.J. Higgins single pushed the lead to 5-1 before Dixon Machado made things 6-1 with a sacrifice fly capping off a five-run frame. Robel Garcia returned to Iowa with a bang as he went deep for No. 16 in the eighth inning. Garcia then added a double in the ninth to go with Trent Giambrone’s two-run shot to give the Cubs a 10-1 win.

Every person in the Cubs lineup picked up at least one hit with Donnie Dewees leading the way with three. Zagunis, Addison Russell, Giambrone and Garcia all had two-hit nights with Zagunis pacing the offense with 3RBI’s. Garcia and Giambrone added two each in the win. Newly acquired Brad Wieck made his Iowa debut tossing a scoreless frame while Matteo Bocchi went right from Eugene to Iowa to throw 2 2/3 scoreless frames in his debut.

Mark Zagunis has homered in back-to-back games and has 6 RBI between the two contests ?? pic.twitter.com/T9SVHEMcOH

Three homers, a Triple-A debut and a series victory in Tacoma for the first time since 2009! ?? pic.twitter.com/hYced0KIZL

TENNESSEE SMOKIES 1 – Mississippi Braves 0: With the Smokies dropping the completion of their suspended game 3-1, it was time for their regularly scheduled contest with the Braves hoping for better results. Although the offense was silenced, for the most part, Erick Leal delivered a five-inning gem to pick up his second win of the season as the Smokies needed just one run for a 1-0 win.

Usually, a first-inning run does not stand up unless you have a big inning. For Tennessee that was not the case as the only run of the ball game came in that first on the Jared Young single for the 1-0 lead. After the Smokies wasted a two-out Roberto Caro triple in the second, they were at it again in the third as a Nico Hoerner walk, and Vimael Machin put two runners on with one down. Unfortunately, they were left stranded keeping the score knotted 1-0.

#Cubs No. 1 prospect Nico Hoerner showcasing his versatility by gunning down a runner from centerfield on an absolute rope to record his first career outfield assist at home plate.

Breakdown of the No. of starts at each position this season:

With the score still 1-0 in the fifth, Mississippi began to make some noise as a pair of runners were on base. Leal was able to keep them off the board one more time before the Braves put two men on again against Bailey Clark in the sixth hoping for a breakthrough. Once again, the Smokies were able to avoid trouble as Wyatt Short slammed the door in the seventh for his ninth save to move the Smokies to 49-65 on the season.

Tennessee managed only five hits in the game with Young providing the lone run of offense. Charcer Burks, Caro, Machin and Christian Donahue tallied the other four hits with Hoerner going 0-1 despite taking two walks. Short dropped his ERA to 1.74 with the save.

Whether it's your first game or you're a seasoned veteran of our ballpark, the magic of baseball is here by the beach.#MBPelicans | #ExperienceIt pic.twitter.com/movyQbXjfe

SOUTH BEND CUBS 2 – Great Lakes Loons 3: Looking to move into sole possession of second place in the Eastern division, South Bend turned to Peyton Remy who has rediscovered his form as a starter. After tossing six strong innings of 1ER and leaving with the lead, Remy was saddled with a no-decision as the Loons rallied for two runs off Eugenio Palma in the ninth to win 3-2. South Bend falls to third and is now 61-50.

Despite battling through some control issues all game long, Remy was able to keep the Loons off the board until the third inning when James Outman took him deep for his 11th of the season and 1-0 lead. That lead was short-lived for Great Lakes as the Cubs rallied in the bottom of the third to take the lead.

That score would hold up until the ninth inning with Palma trying to secure the three innings save. With two men on and two men out, Jair Camargo got a great pitch to hit and cranked it for his 17th double to put the Loons back in front 3-2. That proved to be the difference as the Cubs were retired in order in the ninth to fall by that score.

South Bend picked up seven hits in the game as seven different players collected one. Along with those RBI doubles from Mastrobuoni and Taylor, South Bend received hits from Yonathan Perlaza, Andy Weber, Nelson Velazquez, Cole Roederer, and Slaughter. Nelson Maldonado and Fidel Mejia were the lone two without a hit in the game.

Cubs drop a tough one to Great Lakes by a final of 3-2. We'll wrap up the series tomorrow at 7:05! pic.twitter.com/K2cPm4DLhE

Off day on the river in Eugene, Oregon, tough to beat days like this. pic.twitter.com/x2az7TizbB

DSL CUBS (2) 7 – DSL Tigers 8 (12 Innings): After a long and grueling battle, the DSL Cubs 2 fell to 33-22 on the season dropping a 12-inning contest 8-7 to the Tigers. Down 1-0 in the third, the Cubs got the bats rolling when Ezequiel Alvarez tied things up with a single. A few pitches later saw Felix Stevens connect for his team-leading sixth homer and just like that it was 3-1 Cubs.

The Tigers answered with a three-run third of their own as Adinso Reyes (double), Geury Estevez (sac-fly), and Yoan Bravo (error) all brought home those runs. Looking to strike again in the fifth, the Cubs benefitted from a pair of wild pitches to go back on top 5-4 as that score stood up until the ninth. It was in the bottom of the ninth when Rafael Castillo extended the game as his single tied things up 5-5 and sent the game to extras.

Samuel Duarte gave the Cubs a 6-5 lead with an RBI groundout only to have the Tigers answer on a Sergio Tapia single to tie things up 6-6. Now in the 12th, it was the Cubs retaking the lead as Stevens brought home the go-ahead run with a single. The Tigers would get the last laugh however as Reyes went deep for his fifth of the season in the bottom of the 12th handing the Tigers an 8-7 walk-off win.

DSL CUBS (1) 3 – DSL Red Sox 8: The DSL Cubs 1 took one on the chin to fall to 25-30 as a big ninth inning propelled the Red Sox to the 8-3 win. With Moises Diaz delivering a strong five-inning performance in which just a second-inning error was the difference in a 1-0 Red Sox lead, the offense couldn’t get going until late after the bullpen struggled down the stretch.

Now down 3-0 in the bottom of the seventh, the Cubs were finally able to break through as Jonathan Rodriguez was able to reach base on a throwing error to make things a 3-1 game. That would be as close as the Cubs would get unfortunately as the Red Sox erupted for five runs in the top of the ninth anchored by the Bryan Gonzalez three shot for an 8-1 Red Sox lead. The Cubs managed to plate a pair in the bottom of the ninth off a Rafael Morel homer and Rodriguez single, but that was it falling 8-3.

AZL CUBS (2) 1 – AZL Rangers 8: The AZL Cubs 2 fell to 19-20 on the season as a five-run first inning from the Rangers was more than enough in the 8-1 win. The Cubs did manage to breakthrough in the top of the first however when Richard Nunez singled on a grounder to the left to put the Cubs up 1-0 early.

The Rangers responded in a big way in the bottom of the first capping off the game with eight unanswered runs in the win. Five of those runs came in the bottom of the first as five different players accounted for the runs to give the Rangers a 5-1 lead. An Osleivis Basabe single and a steal of home in the sixth made it 7-1 before Heriberto Hernandez capped off the scoring in the eighth with his seventh homer of the season.

AZL CUBS (1) 1 – AZL Indians (red) 5: Much like AZL 2, the AZL 1 Cubs struggled to get much going offensively as they fell to 20-18 on the season with the 5-1 loss. All five of the Indians runs came in the games first three innings as they put the Cubs in a 5-0 hole before they knew what hit them.

A throwing error on a pickoff attempt brought home the game’s first run in the second before another error allowed Marlin Made to reach base bringing home the winning run in the process for the 2-0 Indians lead. Now in the third, Cesar Idrogo was able to double that lead to 4-0 as his single aided with an error pushed across two more runs. A wild pitch later that inning brought home the Indians final run as it was now 5-0 after three.

Looking for some offensive spark, the Cubs turned to Yovanny Cuevas as he is still hoping to reach Eugene again this season. If he continues to hit the way he has he will be there shortly as his fourth homer of the season in the seventh provided the Cubs lone run in the 5-1 defeat.