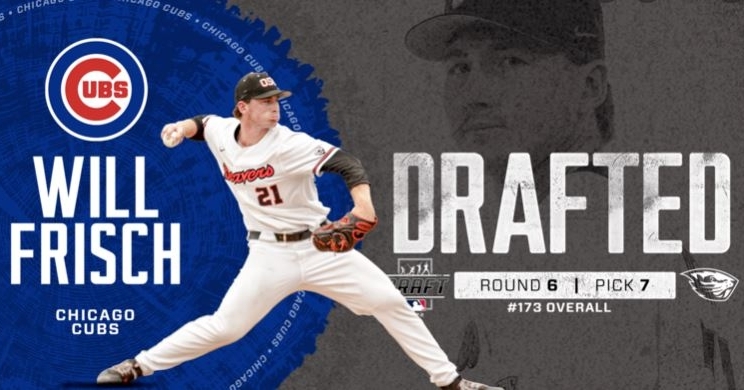 Frisch is an intriguing pitching prospect

With the 173rd overall pick in the 2022 MLB draft, the Chicago Cubs selected another pitcher (you guessed it) as they made Will Frisch their sixth-round selection from Oregon State.

Like a lot of their early-round selections that saw the Cubs choose potential over MLB readiness, Frisch is another high-risk, but high-reward signings. Not only is he a junior which allows him the option not to sign, but he is currently coming off of Tommy John surgery which is why there is risk with this pickup.

However, there is something about him that the Cubs like, and they liked him last season before the injury occurred. After being ranked 155th in 2021, Frisch fell to 200 this season, but a large part of that is due to the injury and not seeing time on the mound.

The thing that drew the Cubs to Frisch was his versatility as a pitcher. He pitched in plenty of different roles while with the Beavers and, for the most part, had success with all of those roles. He was expected to be a full-time starter this season had it not been for the injury, and now the Cubs must figure out where to put him right now.

Like many pitchers pre-injury, Frisch saw his draft stock rise significantly as he was projected to land anywhere between rounds two and four, so to get him in the sixth round could be a steal if he is healthy. Known for his three-pitch mix, Frisch will rely on his fastball a lot as he averages close to 94 MPH with that pitch, but did max out at 98 before his injury.

To go with that heater comes an upper 80s change-up that is not only graded as his best pitch, but he registered a 40% swing and miss rate on that pitch, so you can see how lethal it can be. Frisch also carries an 85 MPH slider with him that may be average right now but could turn into a solid third pitch.

With a solid or better three-pitch mix and control that took a big step forward from 2020 to 2021, Frisch looked the part of a solid starting pitching prospect with a filled-out 6-foot, 222-pound frame. His injury and lost 2022 season make him more of a question mark which is not good if you are a fun, but it is exciting if you are a member of the Cubs because it makes him more of a wild card to play with.

Tommy John surgeries are becoming far too familiar in pitchers nowadays, but this one robbed Frisch of showcasing his stuff as a frontline starter which would have helped his draft stock. Despite not throwing at all this season, he is another hard thrower from the Oregon State tree, and the Cubs know how successful that tree can be.

A lot of scouts like about him was his release point to his pitches that made things tough on a hitter. He has a short-arm delivery that not only makes the ball look faster at times with his offspeed stuff, but adds a lot of RPMs to his pitchers to increase more spin.

At some point, you wish the Cubs would stay away from the Tommy John products, but you can also see why they take them too. You look at how they pitch pre-injury and how many times pitchers get better after the surgery. That makes it tough to pass up on a guy that has potential.

YOu also have to consider that some guys who have this surgery plummet in the draft and fall into a team's lap. That has happened with the Cubs, so adding him to their future mix is not a bad option.