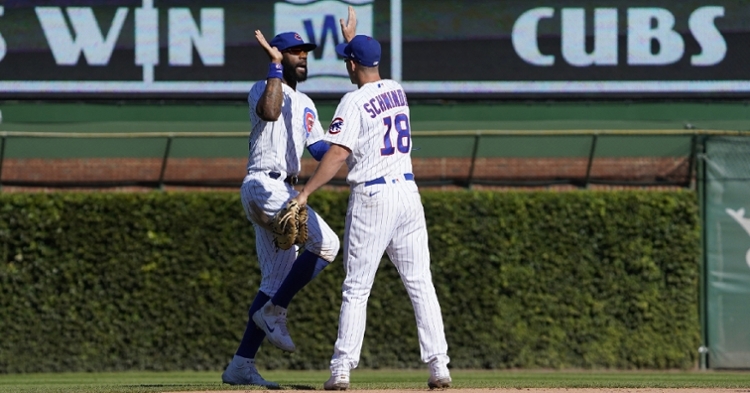 CHICAGO – You may find this hard to believe, but the Chicago Cubs (64-75) keep on winning. In a matchup with the Cincinnati Reds (73-66) Monday afternoon at Wrigley Field, the Cubs managed to pick up their seventh straight win as they ran their record to 5-0 on this 10-game homestand.

Of course, it didn't come without a little late-game drama as the Cubs once again found themselves locked into a tight game. As if the clutch grand slam and his walk-off slide against Pittsburgh weren't good enough, Frank Schwindel had another trick up his sleeve, delivering the game-winning RBI single in the bottom of the eighth to lift the Cubs to a 4-3 win over the Reds.

Coming off his first win as a starter, left-hander Justin Steele took the ball against Sonny Gray. Steele knew he would have to be at his best to top Gray, and early on, that is exactly what he was as Steele held the Reds scoreless through five innings. Gray, on the other hand, wasn't at his best in the first inning, but after that was lights out.

After Rafael Ortega led off the bottom of the first by reaching on an error, Schwindel connected for a single as the Cubs had two men on base and no one out. That set the stage for Ian Happ, who continued his torrid final two months of the season by taking Gray deep for his 19th of the season, giving the Cubs a 3-0 lead.

Gray only allowed one hit the rest of the way as he finished the day, allowing three runs on three hits to go with eight strikeouts in five innings of work.

Through five innings, Steele had his best start as the Reds were guessing what was coming next. That was until the sixth inning when Steele seemed to run out of gas, and the Reds made him pay. For the day, Steele was also charged with three earned runs off four hits as he walked two and struck out four. He started the sixth and couldn't finish as he gave way to Codi Heuer.

Tyler Stephenson led off the sixth inning with a walk before Nicholas Castellanos doubled to put a pair of runners on base. Consecutive hit by pitches to Eugenio Suarez and Asdrubal Cabrera pushed across the first run of the game for the Reds, but there were not done there. A wild pitch from Heuer made it 3-2 before the Max Schrock double tied things up 3-3, and suddenly we had a brand-new ball game.

In what now became a battle of the bullpens, Luis Cessa and Scott Effross were next on the list as they managed to get through the seventh just fine. Effross continued his recent run of success by tossing a scoreless eighth before Michael Lorenzen was given the ball in the bottom of the eighth. With a chance to win another game of the Reds bullpen, Alfonso Rivas picked up pinch hit for a second consecutive game as he represented the tying run.

After advancing to second on a wild pitch, Ortega flew out as Lorenzen picked up a huge first out. Fortunately for the Cubs, they continued to battle as Schwindel came through yet again with another late-game RBI single, giving the Cubs the go-ahead 4-3 lead.

It's Frank's world, we're just living in it. pic.twitter.com/2lMZWMV2u0

That proved to be just enough as Adam Morgan retired the Reds in order in the top of the ninth to secure his second save of the season. The Cubs have now won seven in a row for the first time since the spring of 2019.

When the 2021 schedule came out, many people thought this series with the Reds could be a potential playoff matchup as both teams were considered to be battling for a playoff spot. Instead, you have a Cubs team who has fallen to fourth place in the Central Division while the Reds have risen to second place in the central and wild card race.

With nothing but pride to play for the rest of the way, the Cubs have a chance to play spoilers this week, and that started with a massive 4-3 win on Monday. The win moves them to 5-0 on this homestand, and should they lose the rest of the games, it would guarantee themselves, at worst, a .500 record on the homestand. Not bad for a team of castaways and minor leaguers who were not expected to contribute much this season.

With every passing day, the legend of Schwindel continues to grow, and he added another page to that story on Monday. About 24 hours after he won Sunday's game with a Grand Slam, Schwindel was at it again with an RBI single in the eighth as his hit gave the Cubs a 4-3 win. That makes three consecutive games where his hit has been the game-winner which is impressive when you think about it.

He now has 30 RBIs in 30 games with the Cubs, and if he could keep that pace up for the rest of the season, he would finish with 162 RBIs. Everyone knows that pace will not be sustainable long-term, but witnessing what he is doing has been nothing short of impressive. Schwindel not only is seeing the ball like a beach ball right now, but he is thriving in the clutch, which is something this team lacked for years.

Where has this version of Happ been?

No one is going to deny that Happ has had a rough season. However, he has been on quite an impressive run over the last month-plus as his numbers are starting to look the way the Cubs have expected them to. Not only is he striking out less and making better contact, but he is putting the ball in the air after what seemed like a rare occurrence.

The Happ the Cubs have seen since late July is the one they saw during his rookie season in 2017, the second half of 2019, and the majority of the 2020 season. This is also the version of Happ that will land him a roster spot next season as he continues to show what he can do when he is on.

Most likely, he will be a streaky hitter most of his career, but that doesn't mean he is not valuable. Happ is a switch hitter who has power from both sides of the plate, and when he is on, this is what he can do. He is an essential piece to this lineup and one that the Cubs are hoping can produce at this rate for an entire season instead of just short spurts.

Ian Happ has been raking the last 22 games pic.twitter.com/DQEECasqjQ