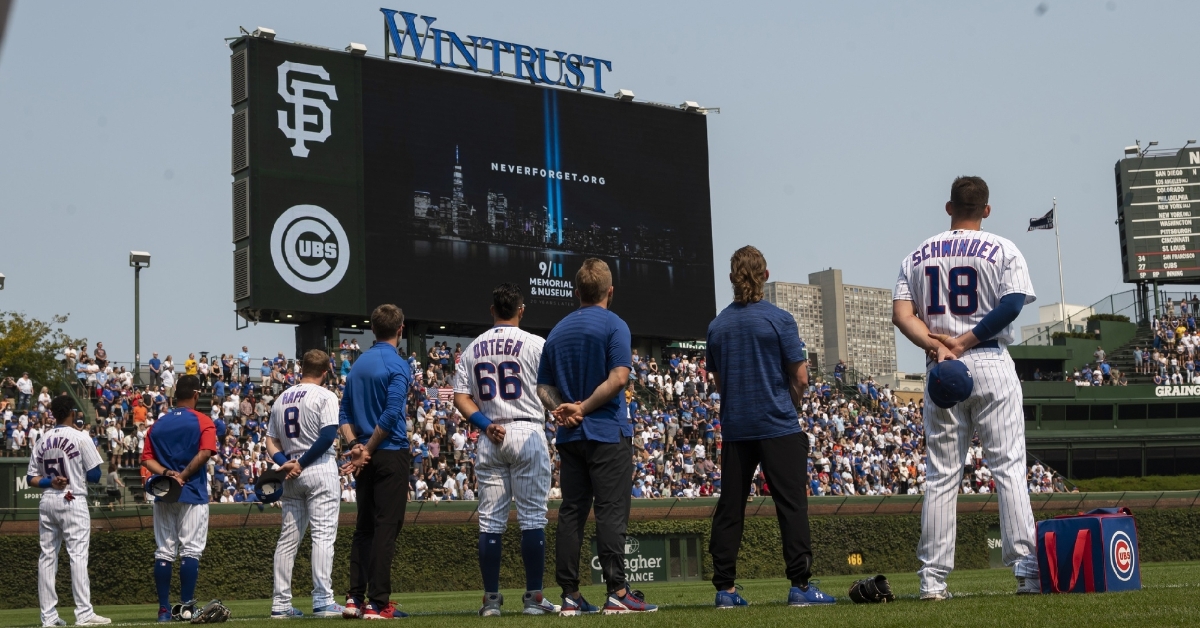 CHICAGO – Now that emotional ceremonies have gone and gone, the Chicago Cubs (65-78) and San Francisco Giants (92-50) got back to work Saturday afternoon at Wrigley Field. With the Cubs 10-game homestand coming to an end and just one more homestand left this season, they are trying to give their fans something to get excited about heading into 2022.

Instead, the Giants continued to prove why they are one of the best teams in the MLB as their full arsenal was on display. Whether it was impressive starting pitching from Kevin Gausman or an offense that continues to deliver, everything seems to be falling into place as the Giants crushed the Cubs 15-4.

Of all the starters who have had a breakthrough season, Gausman may be the most impressive as he picked up his 14th win of the season, tying him with Kyle Hendricks. Gausman gave the Giants six strong innings allowing three runs, but he did strike out nine without walking a hitter. Zach Davies, on the other, continues to struggle as his nightmare of a season continues to worsen by the day. Not only did he lose his 11th game of the season, but he lasted just two innings allowing five earned runs in what was a long afternoon for the Cubs.

Davies does, however, continue to pitch well in the first inning and was rewarded with an early lead. After Rafael Ortega led the Cubs half of the first off with an infield single, Frank Schwindel connected for a double as the Cubs had runners on second and third with no outs. Willson Contreras connected for an RBI single two batters later, but Gausman was able to induce an inning-ending double play to prevent further damage.

That lead for the Cubs was short-lived as the Giants offense erupted for five runs in the second. That all started with a one-out walk to Brandon Crawford before he advanced to third on the Evan Longoria double. With the bases loaded following the intentional walk, Tommy La Stella put the Giants in front for good with a two-run single before Brandon Belt delivered a three-run shot to make things 5-1.

Longoria would add an RBI single off Adbert Alzolay in the third, but the Cubs kept things close early. With two down in the inning, Schwindel kept the inning alive with his second hit of the day before coming home on an Ian Happ triple. A few pitches later saw Contreras deliver his second RBI of the day as his infield single pulled the Cubs within 6-3 after three.

Unfortunately for the Cubs, that would be as close as they would get as the Giants would rip off nine unanswered runs. Five of those nine runs were charged to Manny Rodriguez, who had his worst inning as a pro in the fifth. After loading the bases three hitters in with two walks and a double, Longoria walked, forcing in another run before the Mike Yastrzemski single gave the Giants a 9-3 lead. Tommy Nance was called upon to pitch with one down in the inning and immediately served up a three-run shot to La Stella, putting the Giants on top 12-3.

San Francisco saw their offense go a bit silent over their next few innings only to see them push across two runs off Rex Brothers in the eighth. The first of those was a second bases-loaded walk while Longoria capped off his massive afternoon with a sacrifice fly to make things 14-3. Add in a Lamont Wade Jr single off Scott Effross in the ninth, and the Giants took a 15-3 lead into the bottom of the ninth.

Speaking of Effross, he was in the middle of the action in the ninth inning as he had an opportunity for his first plate appearance as a pro. With Alfonso Rivas leading off the inning with a walk before advancing to third on a Matt Duffy single, Effross picked up his first career RBI using a sacrifice fly to close the gap to 15-4. This was one of the few bright spots on what was otherwise a terrible afternoon.

The Davies project needs to end

There may not be a person ready for this season to end more than Davies. On the flip side, the Cubs will probably admit that they are equally as excited for his season to come to an end. Not only is he 6-11 following his start on Saturday, but his 5.40 ERA is the highest it has been at any point of his career this late in the season.

This goes to show you how rough his season has been when you compare his career numbers. Known as a contact pitcher, Davies has struggled to not only keep the ball in the yard this season but has struggled in terms of his command, where he has a career-high walk rate and career low strikeout rate. That doesn't bode well when he rarely faces a lineup more than twice, and it has become an issue watching him start.

If the Cubs were in a playoff hunt, it wouldn't surprise me at all to see the Cubs replace him with someone better. However, with one pitcher down, one having his innings monitored, and with nothing to play with, the Cubs may just trot Davies out there, hoping he can finish strong to help his case next season.

Wisdom and his slump

When Wisdom broke onto the scene in late-may most Cubs fans knew about his potential. All you had to do was look at his minor league numbers, and you could see the type of hitter he was. Even though his 40% strikeout rate is less than ideal, Wisdom has always had 30-homer potential and has shown it this season.

Wisdom has connected for 25 homers and will most likely surpass Kris Bryant as the all-time leader in homers by a rookie in franchise history. He will also finish leading the team in homers as Wisdom recently passed Javy Baez, the team leader with 24. Pretty impressive for a guy who has always been a minor league player as he showed what he can do when given a chance.

However, since his massive series against the White Sox a few weeks ago, Wisdom has seen his season go into free-fall mode as he is in the middle of a prolonged slump. Not only have the home run numbers gone down, but his average has dropped nearly 40 points while his strikeout rate is approaching 50%. This has always been an issue for him, and it seems like teams are starting to carve him up as the season comes to a close.

A scary moment for Heyward

Not only did everything go wrong for the Cubs, but they may have lost another piece of their team as Jason Heyward left the game in the fourth after a scary injury. The play I am referring to is when Heyward took a knee to the head on his way to third base and was eventually lifted from the game.

While it is unclear how serious he is hurt, there is a good chance that he will be out of the lineup tomorrow, and with an off-day Monday, it makes for two days off. Should he still not be feeling good, or if he is diagnosed with a concussion, it is safe to say his season would be over at that point.

Heyward has had a difficult season this year, especially offensively, but has been showing signs of life lately. With two years remaining on his eight-year deal, the Cubs need him to come back healthy in 2022 and at least show he can provide the Cubs with the offense they saw in 2019 and 2020 to hopefully finish out his deal in good standings.

Here is the play that took Heyward out of today's game. Smart baserunning for the Cubs veteran to take third on the play with no one covering, but led to a chaotic relay and injury setback. pic.twitter.com/gd2MUrJtek