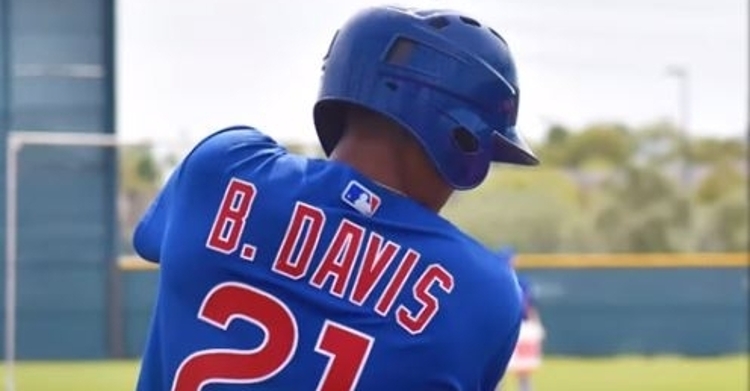 Davis is an elite prospect for the Cubs

It was all about the infield yesterday as the Cubs infield is loaded with talent. A lot of that talent is at the shortstop position, and most of it is years away, but that still shouldn't change the fact that the Cubs have some pieces to make some noise in the coming years. Moving to the outfield and you will find that this is where the most MLB-ready talent lies, with some of that talent expected to show out this year and next year.

Although Rafael Ortega emerged as the team's starting CF last season, and there is a good chance he retains that role this season, the future in CF circles around Davis. Ranked the top prospect in the system and no. 14 overall in Major League Baseball, Davis has been on an upward trajectory since arriving in the Cubs system and has started to show what he can do.

Not only has he shown the ability to hit for average, but Davis has plenty of speed and power, which could make him a 30-30 guy at the MLB level. He also has a keen eye at the plate at this stage in his career, which is great. I expect Davis to get a ton of reps in spring training and get every opportunity to make this team out of camp.

Although he may not crack the opening day roster, he will be one of the first kids called up from the Minors as the future of this organization is in good hands. For the fans' sake, hopefully, the Cubs can keep him around longer than the last group of core players to make their way through the organization.

Given that Ian Happ has been inconsistent at best over the past few seasons, the Cubs could be in the market for a new left fielder. I do believe Happ will have some role on this team in 2025, but that role has yet to be determined as he could wind up as the Ben Zobrist of the outfield. If you want to look at a player with a ton of potential, then Alcantara is your guy.

Acquired in the Anthony Rizzo deal last season, Alcantara has plenty of upside and may have the most upside of his international class. Tall and lengthy, Alcantara draws a similar comparison to Alfonso Soriano, but is more consistent when it comes to offense. He has the potential to give you a 270-280 average while hitting 25 plus homers a year. There is also some speed that comes with his game that he has yet to untap, but the future is bright for him.

The Cubs still have two years left on the Jason Heyward deal, and until that deal runs out, he will do most of the patrolling in right field. Unlike seasons past, his days as an everyday player could be ending as the offensive numbers have not been there through six seasons. Although his bat hasn't been great, you can't argue his defense, and that part of his game will be missed.

When it comes to a replacement for him, look no further than 2021 breakout prospect Velazquez who should be knocking on the MLB door soon. A decent player the first few years of his career, Velazquez went on a tear this season to lead the organization in both home runs and RBIs. That strong run of play continued into the fall, where he took home the Arizona Fall League MVP honors after a great showing.

If last season was a sign of things to come for Velazquez, he will not only move into the Cubs top 10, but maybe even the top 5 prospect list before the season's end. Velazquez has as high of a ceiling as anyone not named Davis and showed that all season long. The key will now be to keep that up as the Cubs could desperately use him.

For the Cubs, keep an eye on Canario and his development as a potential fit for the DH role. Canario was acquired in the Kris Bryant deal along with Caleb Killian. That trade is looking really good right now, and Canario is not even the best player in that deal. If you haven't seen Canario play, you need to get to South Bend or Tennessee this summer.

He is a home run or bust guy, but his power is off the charts and could provide the best power in the system. During his first game with South Bend, Canario crushed one over the left-field pavilion that was an estimated 465 feet. I don't care what level of baseball you play. That is one long shot. If the strikeout numbers do not go down, he will find it hard to carve out a regular role in this league, but give him a few years, and he could be a gem.