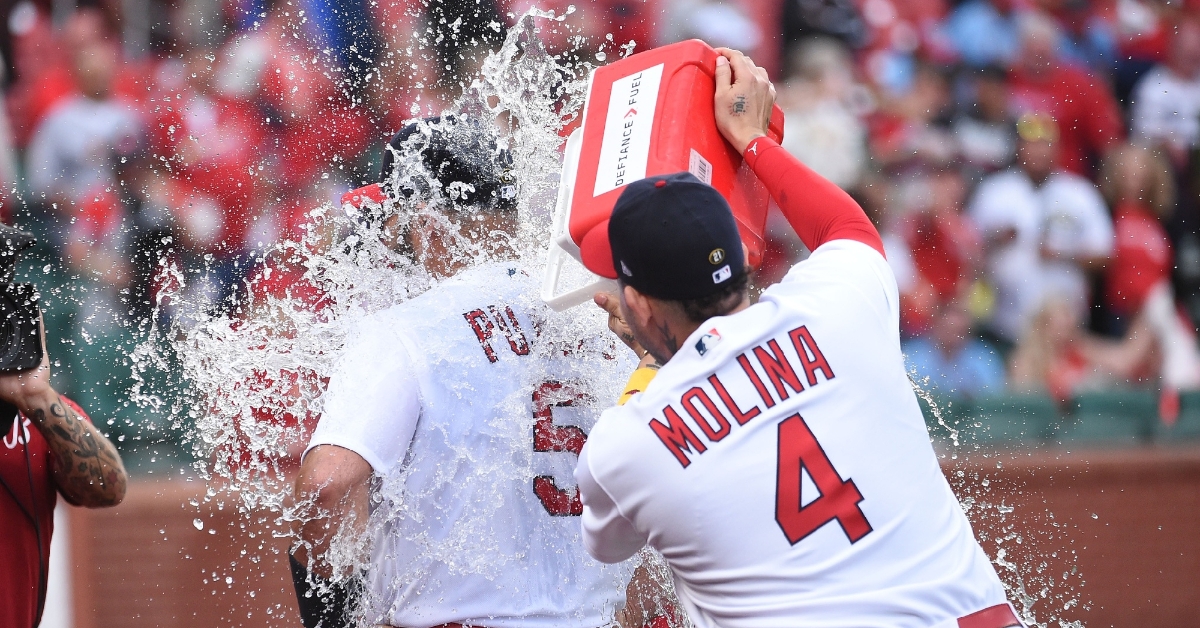 ST LOUIS - Sometimes you have to sit back and marvel at greatness, and Albert Pujols is pure greatness. The unquestioned first ballot hall of Famer is in his final season and continues to inch closer to career homer No. 700.

He continued that quest on Sunday as the Chicago Cubs (56-78) and St. Louis Cardinals (79-55) were deadlocked 0-0 after seven innings of play. That is when the stage was set for Pujols, as he not only came in to pinch hit, but took Brandon Hughes deep for the game-winning homer as the Cardinals swept the Cubs 2-0.

That was a microcosm of how the weekend went as the Cardinals picked up two shutouts over the three games and continue to establish themselves as one of the best teams in the National League. The loss hurts, but what hurts more is the quality start that Marcus Stroman put together that will go unnoticed.

After enduring a rough stretch of starts, Stroman appeared to turn the corner earlier in the week against Toronto. He then upped the ante on Sunday by tossing seven shutout innings with five strikeouts, but had to settle for the no-decision. That was because Miles Mikolas was not only equally as good, but even slightly better.

The right-hander may have only struck out three hitters, but he allowed just two hits and got through eight shutout innings to improve to 11-10. Record aside, his ERA is in the low 3.3 range, so he has pitched much better than the record justifies.

For the most part, the Cubs offense was held in check all game long as they managed to collect just two hits. One of those hits came in the first inning off the Franmil Reyes double, but nothing came from that as he was stranded on the bases. The Cardinals not only responded with a Paul Goldschmidt double in the first, but then had a pair of runners on base in the second, only to see Stroman get out of things without allowing a run.

Reyes appeared to be the only one who had Mikolas sized up as his first-inning double was the only base runner for the Cubs until the fourth when he worked a walk. Even with Corey Dickerson picking up a double in the fourth, Stroman continued to do his thing on the mound as he kept the Cardinals off the scoreboard again and helped give the offense a chance to get things done.

The problem with that was how strong Mikolas was, as he wasn't allowing the Cubs to do anything. A Christopher Morel single in the sixth was the final hit for the Cubs off of Mikolas, but once again, the Cubs were unable to cash in with a runner on base as the game remained scoreless.

That continued to be the case for another two innings as Stroman got through the seventh inning before Mikolas retired the Cubs in order in the eighth to set the offense up for some late-game drama.

With Hughes on to pitch the eighth as the first reliever out of the pen, the left-hander knew how tough things would be as he had to maneuver through the meat of the Cardinals lineup. Hughes managed to get the first out of the inning before Tommy Edman connected for a double to set the Cardinals up with a great scoring chance.

Knowing this may be their last opportunity to score, Lars Nootbaar was lifted for a pinch hitter, and Pujols was chosen to take the at-bat. After falling behind 0-1 in the count, Pujols made Hughes pay for a rare mistake and clubbed his 16th homer over the fence to put the Cardinals in front 2-0. That was also career homer No. 695 as he continues to inch closer to No. 700.

Down to their final three outs, the Cubs needed to make something happen, but it wasn't going to come easy with Ryan Helsley on the mound. With one down in the inning, Zach McKinstry worked a walk to bring the tying run to the plate, but Seiya Suzuki would ground out into a game-ending double play as the Cardinals capped off the weekend sweep of the Cubs.