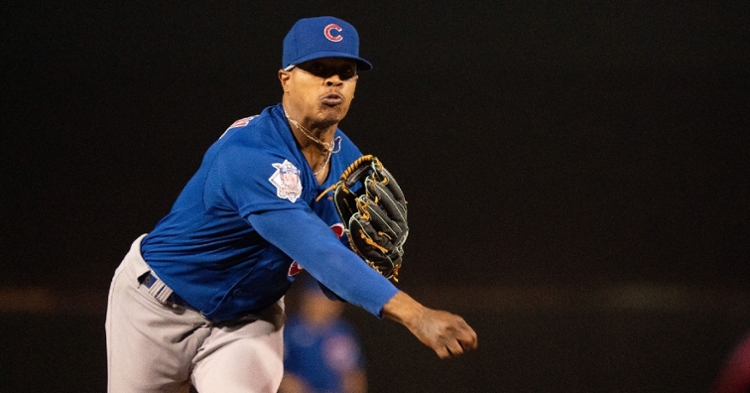 If only there were a way to bank your spring wins and carry them over to the regular season, the Cubs would be in good shape as they have started 6-4 with three ties. Their most recent win came Monday night when the Cubs doubled up the Reds 4-2.

In a matchup between Marcus Stroman and Tyler Mahle, it was the pitcher's duel that many expected it to be, as runs were at a premium most of the night. Following the acquisition of Stroman this offseason, many questioned whether or not he would be the ace of the Cubs, considering Kyle Hendricks and his pedigree the last several seasons.

If you are looking at spring performances alone and nothing else, then Stroman deserves to be the ace this season and continues to pitch well. Across his four innings on Monday, Stroman wasn't at his best as he walked three and struck out one, but he did limit the damage allowing just a pair of runs.

Those runs came in the first two innings, which was all the Reds would muster the rest of the way. The Cubs wasted a great opportunity in the first after Clint Frazier led off the game with a double as he was stranded on the bases with nothing coming from that.

The Reds had their opportunity in the first with Johnathan India working a leadoff walk before advancing to third on a Tyler Naquin double one batter later. With two on and one out in the first, Kyle Farmer traded an out for a run as his groundout brought home India for the early 1-0 lead. Stroman went on to walk another hitter in the inning, but worked out of trouble to minimize the damage.

Despite their excellent record this spring, the Cubs have been playing from behind a lot, which was the case again on Monday. In the second, a leadoff single by Nico Hoerner off Mahle got the inning started before he advanced to second on a Michael Hermosillo hit by pitch. With down in the inning, top 20 prospect Alexander Canario cashed in as his RBI single tied things up 1-1. That would be the only run Mahle would allow as he struck out five in 3 2/3 innings of work.

Still in the second, the Reds struck back as Aramis Garcia got into a Stroman pitch and took it over the left-field fence to make things 2-1. That would be all the Reds would not only get off Stroman, but all they would get the rest of the way as the Cubs pitching was strong yet again.

The next few innings saw the Cubs have a couple of chances as they put three runners on base only to come away empty to remain trailing on the scoreboard. Following Stroman's outing, Jonathan Holder was the first out of the pen as he made quick work of the Reds in the fifth by retiring them in order.

Adrian Sampson was looking to keep that momentum going in the sixth, as he was looking to improve upon his first few outings this spring. Despite walking Mike Moustakas to lead things off, Sampson recovered nicely by inducing a double play and then striking out Aristides Aquino to end the frame keeping the Reds off the board once again.

The Cubs managed to put runners on base in the seventh for the fifth straight inning, only to come away empty-handed. If that is a sign to come for the regular season, bringing runners home could be a struggle which is not good for this offense. Now on to pitch was Stephen Gonsalves as he continues to make a case for a roster spot.

Gonsalves allowed a leadoff double to Max Shrock to begin the seventh, but responded by retiring the next three and two of them coming via the strikeout. With the pitching giving the Cubs every opportunity possible, it was time for the offense to come through, and that they did in the eighth inning.

You could say better late than never if you are a Cubs fan. Unlike the Reds that saw their regulars do most of the damage early, the Cubs minor leaguers continue to be the spark plugs for this team.

A leadoff walk by Levi Jordan was just the beginning as the top prospect Brennen Davis went deep for the second time this spring to put the Cubs in front 3-2.

Later in the inning, Alfonso Rivas added a single, but the Cubs couldn't bring him home as they now led 3-2.

Looking to hold on to that lead, the Cubs for Manny Rodriguez to pitch the eighth, and once again, he ran into some big-time trouble. After allowing a pair of singles, including a leadoff one by Naquin, Rodriguez struck out the next hitter before an infield hit loaded the bases with one down. Needing a hit to retake the lead, Rodriguez got the last laugh as he induced an inning-ending double play to keep the Cubs in front with one inning to go.

In the ninth inning, the Cubs looked for insurance as Zach Davis dropped down a perfect bunt for the one-out infield single. Add in hit by pitches to both P.J. Higgins and Jordan, and the Cubs had the bases loaded with one out and Davis coming to the plate. After homering in his last at-bat, Davis went down on strikes, but the Cubs wouldn't come away empty-handed as Christian Donahue worked a bases-loaded walk to push across another run sending the game to the bottom of the ninth with the Cubs up 4-2.

In that final inning, David Ross went with another minor leaguer as the organization's No. 29 prospect Ethan Roberts was called on to finish the job. Much like the rest of the relievers, Roberts worked around some trouble as a one-out walk was followed by a single, which the Reds were thrown out trying to stretch that single into a double. Roberts then struck out the game's final hitter to secure the save and give the Cubs a well-earned 4-2 win.