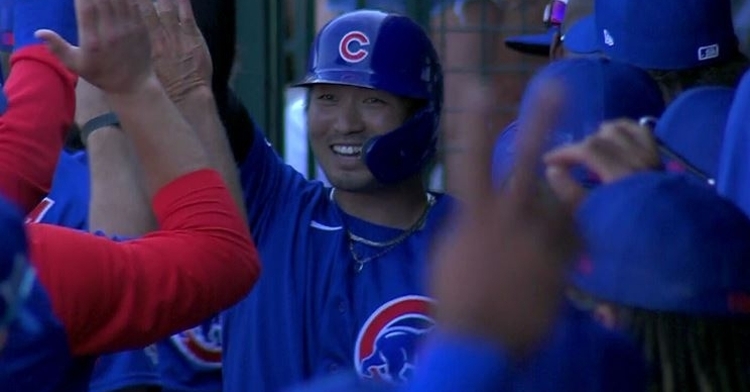 Suzuki had an impressive performance in the win

As David Ross continues to round out his roster, many of the pieces are starting to come into shape. While guys like Seiya Suzuki, Nick Madrigal, Willson Contreras, and Ian Happ know their role in the lineup, several other players are looking to make this team and leave their mark.

From a pitching side of things, that is where things are much more wide open as the bullpen is about as unsettled as they come with the rotation still figuring things out. We know that Kyle Hendricks, Marcus Stroman, Wade Miley, and now Drew Smyly have officially been announced as the team's starters so far.

What happens after that is up in the air as Alec Mills, Justin Steele and Keegan Thompson are all getting looks with a decision to be made soon. Getting back to baseball action, the Cubs were back at home Wednesday to close out the month of March at home.

With a solid 7-4-3 mark on the Spring, including 5-2 at home, the Cubs continued their winning ways and ended the month of March with an 8-5 win over the Mariners. Getting back to Smyly for a minute, after finding out he would indeed be part of the rotation this season, the lefty took the ball against Seattle, looking to build off his first start.

Although not as conditioned as the rest of the pitchers, Smyly was strong in his 2 2/3 innings of work, allowing just one run on four hits to go with four punchouts. Considering he allowed a leadoff double and a Ty France single to open the game and then left them stranded, you have to like what you saw from Smyly in this one.

For the Cubs, they wasted little time getting to Marco Gonzalez as he was on the bump for the Mariners. Gonzalez was cruising through two innings before unraveling late to allow six earned runs in 4 2/3 innings of work.

With Seattle holding a 1-0 lead in the third after scoring on a second-inning balk, the Cubs bats started to make contact against Gonzalez and hit him hard. A one-out single by Nick Madrigal got things started before he came around to score on the Frank Schwindel two-out RBI double. With a pair of runners on base, Jonathan Villar put the Cubs in front as his RBI single gave them a 2-1 lead.

With Smyly out of the game, it was time for Robert Gsellman to take the ball as he was looking to respond from a horrific first outing. Despite struggling again where he walked a pair after a leadoff Jarred Kelnic single to load the bases, Gsellman was able to limit the damage allowing just a Jose Caballero sacrifice fly to tie things up 2-2. That has to be considered a win for Gsellman as he was on the verge of another rough outing.

Looking to keep their offensive momentum going in the fourth, Ian Happ picked up a one-out single before a massive two-out rally busted the game open. Nico Hoerner started that rally with an RBI double before the Madrigal single made things 4-2. Those two will be fun to watch over the next several years, as their bat-to-ball skills will be enormous for this team.

Still with two outs, it was time for Suzuki as his first hit as a Cub have been any better, taking it over the left-center field fence for a two-run shot to make things 6-2.

Seattle was able to get another run off Gsellman in the fifth with the Kelnic RBI single, but the Cubs still held a 6-3 lead.

The following two innings saw Jesse Chavez not only put together his best outing of the Spring, but saw the Cubs offense continue to make noise in the sixth. That noise started with a Clint Frazier solo home run as his great Spring continues.

A Hoerner double immediately after had the Cubs in business to score again, with Michael Hermosillo capping off the scoring for the Cubs with a sacrifice fly to make things 8-3.

One of the strengths of the Cubs all spring has been their bullpen, but outside of Chavez, it wasn't great on Wednesday. With Michael Rucker summoned to pitch the eighth, the righty immediately found himself in trouble as a leadoff walk followed by an error gave the Mariners a pair of runners.

A Cesar Izturis Jr single later and the Mariners not only pulled within 8-4, but still had two runners on base with no outs. Rucker was able to strike out the next hitter he faced, but was far from out of trouble as Riley Unroe ripped an RBI double to make things 8-5 and a base hit away from a one-run game. Knowing that, Rucker went straight nasty by striking out the final two hitters he faced to end his outing with the Cubs still in front 8-5.

Unable to cash in during their bottom half of the eighth, Brandon Leibrandt was called on to pick up the save in the ninth. Unlike Rucker and Gsellman, Leibrandt knew the task at hand and took care of business as he retired the Mariners in order to secure the 8-5 win.

The Cubs will be off tomorrow for their lone Catcus league off day and return to play on Friday against the Diamondbacks and Brewers for split-squad action.