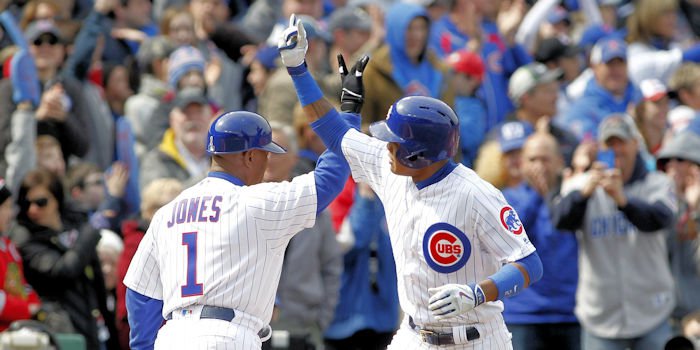 CHICAGO -- The second half of the baseball season has brought back winning baseball with the Cubs. The North Siders have seemingly found their winning ways and are the right track in returning to their former championship form. The Cubs have followed a mediocore 43-45 start to the season by winning 12 of their first 15 games. In that stretch since the All-Star break, the Cubs have outscored the competition by thirty-three runs, getting contributions from all over the diamond. The starting pitching has greatly improved thus far posting a combined 3.24 ERA and holding opposing hitters to a .200 batting average. The offense has also been able to catch fire; they have score 79 runs, while hitting .281 and slugging 25 home runs. Willson Contreras, Albert Almora Jr., Javy Baez, Jon Jay and Addison Russell have all hit .300 or above to this point in the second half. After a lackluster first half of baseball the Cubs have shown quickly that they are still highly capable of being one of the best teams in baseball.

The Cubs entered All-Star weekend trailing the Milwaukee Brewers by 5.5 games. Two weeks later they sit alone in first place. The current streak the Cubs of been on could stem from a few triggers, most notably, the blockbuster deal for pitcher Jose Quintana. Quintana has performed well for the Cubs, boosting a previously struggling rotation. The trade could also have inspired some confidence in this team by reaffirming upper-managements view of this team as a contender. It could have been some motivation of only sending one player to the all-star game, or maybe just simple rest and recovery. The break allowed players to clear their heads and refocus on baseball, or possibly get healthy from nagging injuries which have plagued the team. Whatever got the Cubs back to being a winning team, it can be traced back to one play; one play which may not have seemed as important until now.

On July 14, Cubs shortstop Addison Russell faced Baltimore Orioles’ closer Brad Brach during the 9th inning of an 8-8 tie at Camden Yards in Baltimore. Russell, who was coming a dismal first half, drove a line drive home run into the left field seats to give the Cubs the lead in the 9th inning. Wade Davis finished off the game giving the Cubs a 9-8 win. The Cubs entered the night trailing the division by 5.5 games and had played sub-par baseball for the majority of the first half. A loss in that game brings the Cubs to a season high 6.5 games back of the division and a season worst three games under the .500 mark. Losing that game would have been devastating for the Cubs. The game saw the Cubs get out to an 8-0 lead in by the third inning and looked to be on their way to coasting to a victory. However, the pitching imploded and the bats went silent for the rest of the game allowing the Orioles to storm back into the game. The collapse culminated with a 2-run home run by slugger Mark Trumbo in the 8th inning to tie the game at 8-8. Eyeing what could be their worst loss of the season, Russell, who hit just above .200 with only seven home runs in the first half, faced Brad Brach, a pitcher who had been a top late inning reliever in the American League for the past two seasons. Russell collected home run number eight in dramatic fashion to avoid an ugly loss for the Cubs. Russell’s home run avoided any further slip for the Cubs and came from what had been an unexpected source. Had Russell not homered in that situation the Cubs would not have been able to take off the way they have. There is no way they continue to win and gain confidence had they blown an 8-0 lead to start the second half. Russell ensured they didn’t have to worry about it.

Addison Russell lines a go-ahead solo home run over the left-center-field wall, giving the Cubs a 9-8 lead in the top of the 9th inning!!! pic.twitter.com/PM7HNk6u3J

The win also offered a bright spot for the Cubs on a personal note for Addison Russell. Russell has faced some off the field issues this season and performed poorly on the field. Coming off an All-Star start last season, Russell has looked like a different player this year. He has routinely looked over matched at the plate with an inability to make consistent hard contact. If the Cubs are looking to make another run this season they need their star shortstop to improve and to this point in the second half, he has done just that. Russell has hit .300 with three home runs since the break and is looking like a far more confident player. While players such as Willson Contreras and Javier Baez have received more attention for their stellar play, Russell’s impact cannot be overlooked. Last season Russell recorded as many clutch hits as anyone, and in Baltimore, he showed he is still capable of clutch hitting. That one particular at bat has lifted the confidence of Russell and his teammates, leading them to the look of a contender again. Russell’s ninth inning home run in the first game of the second half allowed the Cubs to avoid their roughest point of the season and sparked the team to catch fire. If the Cubs are to continue playing well, that is a game for fans to remember. That is the at bat that may have flipped the season.