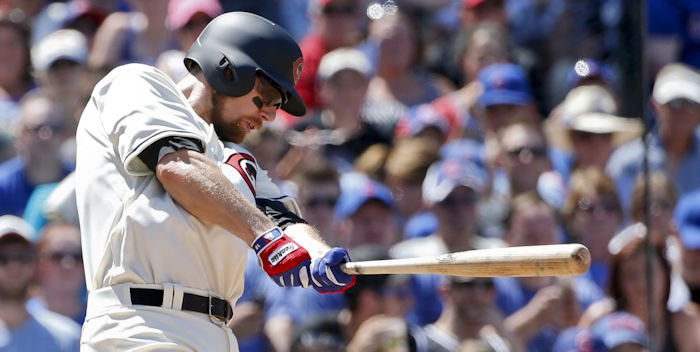 CHICAGO -- With his third home run of the season, Cincinnati Reds catcher Tucker Barnhart erased a two-run deficit for his squad and hushed the fervent Wrigley Field crowd. A three-run blast, Barnhart’s shot off of the usually reliable Trevor Cahill, a middle reliever for the Chicago Cubs, gave the Reds a 4-3 lead that they never relinquished, winning the game by a final margin of 5-3.

A game featuring three impressive homers, Wednesday afternoon’s matchup saw the Reds gain early momentum when shortstop Zack Cosart, who was for 2-4 at the plate on the day, hit a round-tripper over the ivy-covered wall in center field. Though it served as an unfortunate beginning to Cubs starting pitcher Adam Warren’s outing, the young right-hander, who only recently transitioned from the bullpen to a starting gig, was able to settle down and pitch fairly well. Only giving up three hits and striking out six in five innings on the hill, Warren was in line for the win when departing after the fifth inning.

Trailing 1-0 upon entering the bottom half of the second, the Cubs, who donned 1916 throwback uniforms for Wednesday's game, collected two runs to take the lead. With a runner on first and one out, shortstop Addison Russell garnered his only hit of the afternoon with a double to deep left that brought in a run. Catcher Miguel Montero answered Russell’s double with a single of his own in the very next at-bat, enabling the speedy Russell to score from second.

The game then entered a period of offensive drought, with neither team having a runner reach scoring position in the third or fourth innings. Cubs second baseman Ben Zobrist brought some life back into the ball game in the fifth inning, however, launching one of Reds starter Anthony Desclafani’s pitches over the right field wall. The home run provided the Cubs with a 3-1 lead, but, needless to say, the Cincinnati home run in the seventh turned the tables.

The Reds added their fifth run of the game when right fielder Adam Duvall was able to cross the plate on a wild pitch from rookie Cubs reliever C.J. Edwards. Although former Cubs pitching great Ferguson “Fergie” Jenkins was on hand Wednesday to sing “Take Me Out to the Ball Game,” the Cubs’ bullpen clearly was not inspired, blowing the game for the North Siders.

After losing the lead in the top of the seventh, the Cubs never threatened, and the Reds claimed their second victory in the finale of the three-game series. Losing 5-3, the Cubs (52-32) amassed the same number of hits as the Reds (32-54) on the afternoon (8) but came up short at the plate when it mattered most. Desclafani earned the win, moving to 3-0 on the year, and Cahill received the loss, dropping to 1-3 overall. Cahill's blunder spoiled what was a marvelous debut start by Warren, who did not allow the first-inning homer to dampen his spirits and went on to retire the last 11 batters he faced.

Having lost six out their last seven games (and 12 out of their last 17) and failing to eclipse the five-run mark during that entire seven-game stretch, the Cubs appear to be in desperate need of injured outfielders Dexter Fowler and Jorge Soler to return to action.

Speaking on the loss following the game's conclusion, Cubs manager Joe Maddon told reporters, "We need to do better in the latter part of games scoring runs, too. Even if it is close or we get behind or even if is tied, we are just not doing a real good job of finishing off games offensively. But overall, everything is good. The effort is good. They just beat us with the three-run homer."

Surprisingly, despite their recent faltering, the Cubs still maintain a sizable lead in the National League Central, as they are currently 8.5 games ahead of the second-place St. Louis Cardinals (43-40). While dropping two out of three to the worst team in the division, the Reds, at home is not ideal, the Cubs will look to rebound tomorrow night against the worst team in the National League, the Atlanta Braves (28-57). A rain-out makeup game, Thursday’s outing will feature Cubs starter Jason Hammel taking on Braves starter Lucas Harrell.

One of the greatest #Cubs pitchers of the century, Hall of Famer @FergieJenkins31, leads today's stretch. pic.twitter.com/D6auPZNq0g