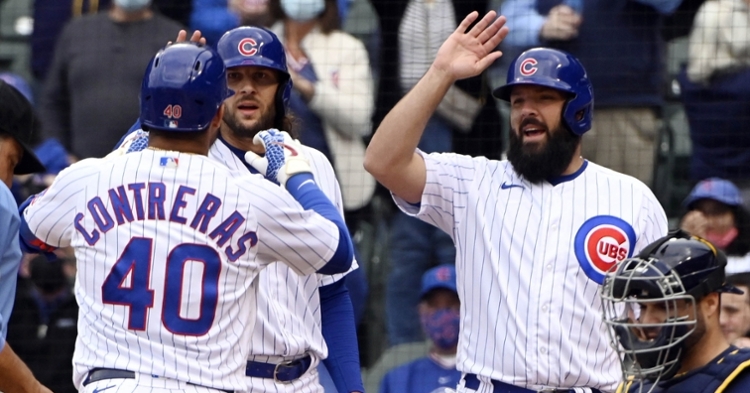 Scoring a ton of runs is becoming a theme for the Cubs as of late, and they were at it again on Friday. With Kyle Hendricks on the mound searching for his first win, the Cubs offense backed him with plenty of support right from the start and didn't look back. Not only did they pound out 17 hits, good for a season-high, but they scored 13 or more runs for the third time this week, dominating Milwaukee 15-2.

Hendricks was much better this time out, and that makes two great outings against Milwaukee this season. He has now gone 12 innings in two starts vs the Brewers allowing three earned runs to go with 12K. With Brett Anderson on the hill for Milwaukee, the Cubs not only feasted off him but also off Josh Lindblom in the first inning as Anderson lasted just 1/3 of an inning before leaving with an undisclosed injury.

Back-to-back doubles from Kris Bryant and Anthony Rizzo led to the game's first run before a David Bote infield single made things 2-0. Jake Marisnick delivered the big hit initially as his bases-loaded double cleared the bases making things 5-0. A Nico Hoerner RBI double capped off a six-run first extending things to 6-0 after one.

The Cubs offense continued their onslaught in the second inning with Rizzo and Baez going back-to-back, making things 8-0. A long Jason Heyward triple made things 9-0 before Marisnick extended the lead to 10-0 with a groundout. Marisnick capped off his five-RBI day with a homer in the fourth as the Cubs were in complete control 11-0.

After being silenced by Hendricks for five innings, the Brewers started to get to him in the sixth, making him work for every out. Kolton Wong capped off a three-hit day with his first homer of the season, followed by Billy McKinney going deep for the third time this season as the Brewers were on the board 11-2.

The Cubs offense capped off the scoring in the bottom of the sixth with Austin Romine picking up his first RBI of the season before Willson Contreras ended a hitless afternoon with a three-run shot as the Cubs cruised 15-2.

When the Cubs signed Marisnick this offseason, the primary focus was to bring the defensive ability that Albert Almora once had. Anything with the bat would be a pleasant surprise, given his track record at the plate.

After an injury delayed his start to spring, Marisnick finally got going across the final 12 games of spring, adding a nice finishing kick to his spring training. Although he has seemed limited action much of this season, Marisnick has now started three consecutive games, and the results are looking good.

Not only has his defense been what the Cubs expected, but Marisnick has produced in a big way, driving in five RBIs on Friday, and has now driven in seven across his last three starts. This is the kind of production the Cubs need from him as he makes this team deeper from top to bottom. With the Brewers trotting a righty on the hill tomorrow, it will be interesting to see if Marisnick continues to play, especially with Joc Pederson down.

Hoerner picking up where he left off:

As spring training came to a close, only Pederson had a better spring than Hoerner as he simply hit the cover off the ball. When news broke that he wouldn't make the opening day club, many fans were both angry and confused by the decision but also knew that it would only be temporary.

With Pederson on the IL until early May, now was the perfect time to get Hoerner back on the big-league club and for him to get plate appearances. Expecting maybe a little rust early on, Hoerner has picked up right where he left off, delivering not only an RBI but adding another hit later on.

It wasn't just the hits that the Cubs liked to see but, more impressively, his approach to the plate and hard contact. He came in focused and aggressive and wasn't afraid to let loose. Expect Hoerner to get plenty of playing time across the next 10 days, with most of it coming in either left field or second base. The question will come when Pederson returns if he goes back to AAA or if he stays and someone else goes.

Nico Hoerner has two doubles (yes, one was vs a position player) in five plate appearances today.

He had four extra-base hits (all doubles) in 126 plate appearance last season.

Good to see pitchers back to form

For the most part, Hendricks delivered the typical outing Cubs fans expect, but there were still some concerns. There was some early hard contact off him, for starters, but he was able to settle in and limit the damage. Secondly, he allowed consecutive home runs in the sixth inning, giving him six homers allowed in his last two starts. He has now allowed eight home runs this season after giving up five all last year, so the long ball is a concern.

Finally, Hendricks hadn't thrown more than 74 pitches in any previous outing so getting to 91 was a struggle. Hendricks certainly hasn't built up his arm strength yet, and when you don't throw particularly hard, that is a problem. His stamina will get better as the season goes on, but the Cubs may monitor that for the first couple of months.

While Hendricks got back to his old self, lefty Kyle Ryan made his season debut after missing most of the spring with COVID. Once an essential piece of the 2019 bullpen in which he led the team in appearances, Ryan took a step back in 2020 as he struggled with his command. Expected to play an important role again this season, Ryan looked good in his first outing of 2021, giving Chicago another lefty option to deploy all over the later innings.

Finally, Dillon Maples got into another game after going what seemed like weeks between appearances. Always known for his elite slider and swing and miss stuff, Maples has never harnessed his command at the Major League level hence why he hasn't lived up to his potential.

Following a scoreless inning of work with two punchouts, Maples has lowered his ERA to 2.25 on the season and now has 14 strikeouts in just eight innings of work. His eight walks are still a bit concerning, but for the most part, he has pitched miles better than in seasons past. He will be a significant X-factor this season if he continues to harness that command.