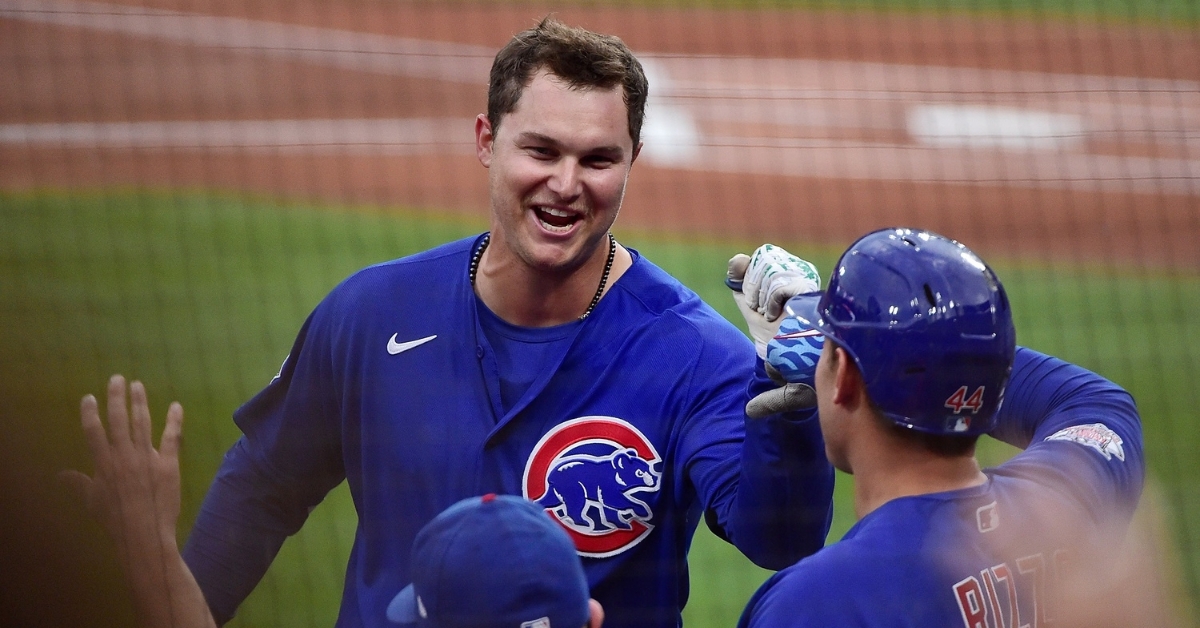 It took 44 games, but the Cubs and Cardinals finally renewed their rivalry in game one of 19 this season. If you're a Cubs fan, it was well worth the wait as the Cubs used an eight-run eighth inning to jump all over the Cardinals 12-3.

It was another Kyle Hendricks esque start as the right-hander pitched into the seventh inning before yielding three runs. However, only one of those runs was earned as the Cubs defense committed a pair of errors that led to two runs. The bullpen took care of things the rest of the way for the Cubs as they continue to pitch lights out in May as the Cubs move to 22-20 with the win.

The Cubs couldn't have asked for a better start to the game as Joc Pederson took Carlos Martinez deep for the leadoff homer. That was just his second homer of the season and first since early April. After the Cardinals tied things up in the third on a Tommy Edman RBI double, Pederson out the Cubs on top once again in the fifth with a sacrifice fly.

The critical part of this game came in the bottom of the sixth when the Cardinals began to put traffic on the bases against Hendricks. He was able to wiggle away by just allowing one run, but the game was tied once again. That was when the Cubs teed off on a struggling Cardinals bullpen pushing across 10 runs the next two innings, including eight in the eighth to pull away for the 12-3 win.

Last season, the Cardinals were a great defensive team as they led the National League in defensive runs saved. This season, they are toward the middle of the back as their defense hasn't been as good as seasons past. That proved to be the key to the Cubs taking the lead in the seventh, as a throwing error by Yadier Molina allowed Nico Hoerner to score the go-ahead run before the Cubs began to tack on later.

You can often get away with sloppy play against bad teams, but against teams playing great baseball, that isn't going to work. Another thing the Cardinals would love to iron out is their bullpen as they continue to struggle. Not only did they serve up 10 runs in the game, but they continue to have all sorts of command issues, walking more hitters than they have struck out.

When Mike Maddux is your pitching coach, that is unheard of and something the Cardinals would love to get fixed soon. Chicago certainly capitalized on the Cardinals inability to throw strikes. While St. Louis may have the better starting pitching, if this series becomes a battle of the bullpens, the Cubs have the advantage over them.

Tacking on runs is always a good thing

When you have a lead late in the game, the best way to ensure a win is to add on when it counts. The Cubs certainly took that to heart as they used a massive eighth inning to provide the bullpen with not only insurance runs but a stress-free rest of the game.

Not only did the Cubs bat around in the eighth, but they pushed across eight runs taking what was a 4-3 game and turning into a 12-3 laugher. They did that by showing patience and taking walks while also coming through with countless clutch hits to keep the line moving.

For a team that has struggled to hit with runners in scoring position, it was indeed a pleasant sight to see so many guys come through with men on base during the eighth inning. This team is starting to find their stride at the perfect time, and they are beginning to be a team that no one wants to play right now.

It is not too often you have a team where the bullpen has thrown more innings than the starters. For the Cubs, that is the case as their starting pitchers are ranked 27th out of 30 teams in average innings per start. You would think all that extra work would put a strain on bullpen arms, especially early in the season, but so far, that is not the case.

Not only has the Cubs bullpen been good in May, posting the second-best ERA in baseball, but they are currently on a stretch of 19 2/3 scoreless innings. Those innings have come from various guys ranging from Craig Kimbrel, Andrew Chafin, Ryan Tepera, Rex Brothers, and Dan Winkler.

Others involved in the mix have been Keegan Thompson, Tommy Nance, Justin Steel, Dillon Maples, and Brad Wieck, as seemingly everyone who comes in from the pen is ready to toss a scoreless frame. What is so promising about this is that not only does a different player step up every night, but younger players continue to answer the bell in guys like Nance, Thompson, and Steele.

Those are just the beginning of the pitching wave coming to Wrigley, and fans are getting a glimpse of what their future may look like. For all the criticism that Jed Hoyer took on this offseason, you have to give him some credit as to what he did with this pen. He took a flyer on many of these players but has found value in guys that have success in the past.

Sure, guys like Brandon Workman didn't work out in his favor, but Hoyer didn't hesitate to cut his losses and move on from within. He deserves a ton of credit for putting the pieces of this bullpen together, and it has now become one of the best in the game.