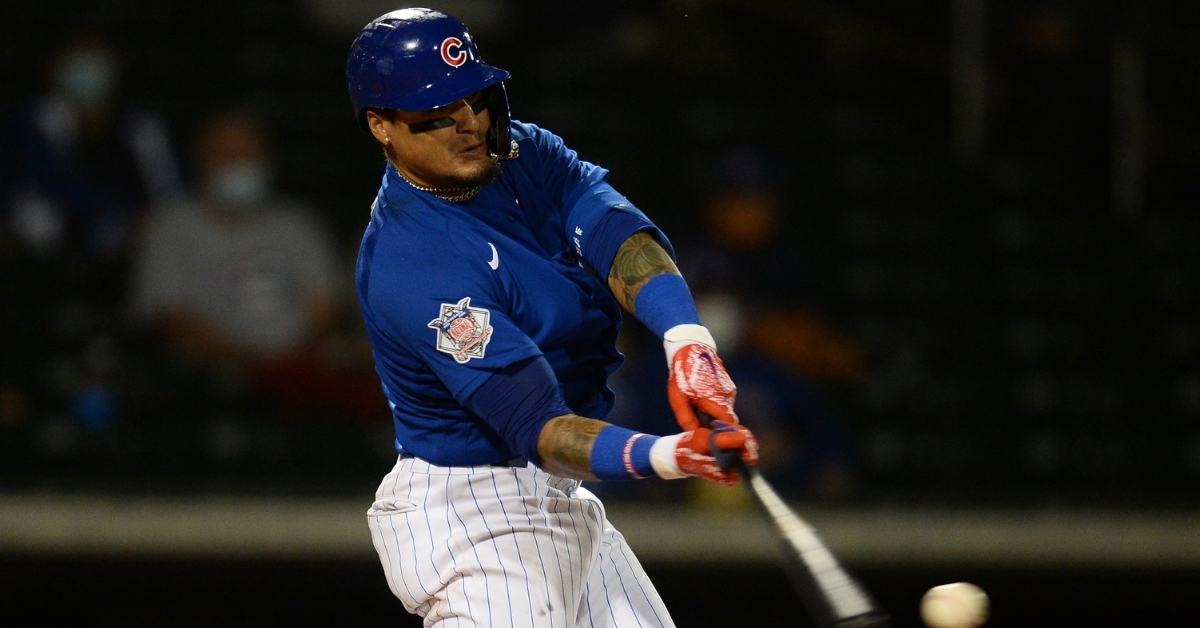 Baez and Co. hope to get off to a fast start in 2021 (Joe Camporeale - USA Today Sports)

If you want to be the best, you must beat the best as Chicago took on the defending World Series Champion Los Angeles Dodgers in Cactus League play. In their second of two meetings this spring, Chicago received strong starting pitching but couldn't get the bats working as they fell 5-2.

Making his first start since March 13th was Adbert Alzolay, as he opposed flame-throwing Dustin May. Alzolay hasn't had the best spring as he continues to battle for the fifth and final spot in the rotation. After spending a few weeks working in the B game, Alzolay returned to the mound last night and put together a great effort.

In his 3 2/3 innings of work, Alzolay struck out five batters, including the side in the third inning to go with just one walk. That was a pleasant sign when you look at how much he struggled with his command all spring. To go with his line, he allowed just one hit but was saddled with two earned runs in the losing effort. Both of those earned runs allowed came in the fourth inning when Brendon Little allowed an RBI single to Will Smith, which put the Dodgers in front 2-0.

After putting just one base runner on base the first three innings against May, the Cubs finally got to him in the fourth, although they were gifted the run. A leadoff walk by Ian Happ set the table as he advanced to second on a Willson Contreras grounder. With Kris Bryant at the plate, Happ was running on contact and forced a bad throw from SS Corey Seager. That throw got away from first basemen Max Muncy allowing Bryant to reach and Happ to score as the lead was cut to 2-1. That was all May would allow on the night, throwing 70 pitches in five innings to go with one walk and six punchouts.

With Brad Wieck now in for the sixth inning, the Los Angeles offense made him work as he needed 30 pitches to get out of the inning. Wieck did his best to limit the damage, but once again, it was Smith coming through as his pop fly fell in front of Jason Heyward to make things 3-1. Wieck yielded to Dillon Maples, who allowed a Seager RBI grounder in the seventh and walked three men to go with three strikeouts in two innings of work.

Down by three runs in the eighth inning, the Cubs started to show signs of life once again as Ian Miller took over for Contreras following a one-out walk. Speed certainly kills on the bases as Brennen Davis needed just one pitch to push the second run across as his RBI double made things 4-2. That was the first RBI of the spring for Davis, who was stranded at second following two K's. A matt Beaty homer of James Norwood in the ninth capped off the scoring with the Dodgers taking down the Cubs 5-2.

The loss moves the Cubs to 13-8-3 this spring as they return to the field tomorrow to take on the San Francisco Giants.

All spring, the biggest conversation has been what to do with Adbert Alzolay. The No. 7 prospect in the Cubs system is the most MLB-ready arm in the system and was allowed to compete for the starting five this spring. After a rough go of things, his first three outings, Alzolay delivered a great performance against the league's best offensive team.

That could serve as a confidence boost for him and may make things interesting when it comes to David Ross's decision. From a performance standpoint, Alzolay has struggled this spring, and with one more option remaining, it may be easy for the Cubs to send him to Iowa to open the season. However, the best thing for his development is to go from pitching in spring games to not seeing action for a month.

Alzolay will play an important role on this team this season, but his role remains unknown. Whether it is as a starter or out of the pen, the Cubs face a tough decision on him, and he should have one more chance to prove himself this spring.

One of the biggest knocks about the Cubs offense has been their inability to hit high-velocity pitchers. Not only did they rank 12th in on-base percentage, but they were an MLB worst against pitchers with high velocity hitting just a 195 against pitches 95 MPH plus.

Facing one of the hardest throwers in the game Thursday night, the Cubs once again continued to struggle with high velocity struggling to make contact against May. When they did make contact, it was typically weak contact outside a Javy Baez liner in the second inning that he hit right at Cody Bellinger.

Baseball isn't what it used to be, and throwing 95 plus isn't anything out of the norm nowadays. With more and more pitchers bringing high heat with them, this team must figure out how to hit high velocity. If not, look for another long year offensively as the Central division is loaded with flame-throwing arms.

After the season that Baez had in 2020, there were many mixed feelings about whether he deserved a long-term deal. While those extension talks have continued into the spring, no deal has been met, and at this point, I am starting to wonder if the Cubs should extend him.

Don't get me wrong, I love Baez, and I think he is a good player, but he isn't a great player anymore. Known as a free swinger, Baez has failed to adjust with his approach at the plate, and the strikeouts numbers are concerning. Those strikeouts continue to pile up this spring as he is barely hitting 200 right now.

Baez will not be a patient hitter, but he does need to learn how to make contact. He tries to crush the ball 500 feet every swing, which makes him look wild at the plate. Pitchers not only know that, but they know he will practically swing at anything with two strikes. Basically, if Baez has two strikes on him, you usually pencil it in as a strikeout at this point.

Hoping for a better 2021 than 2020, his performance this spring is concerning as he looks like the same player he did last year. Hopefully, when the regular season starts, things will change, but at this point, Javy is who Javy is.

Dustin May pumping 100 past Javy Báez is aesthetically pleasing pic.twitter.com/neE29PMHl1