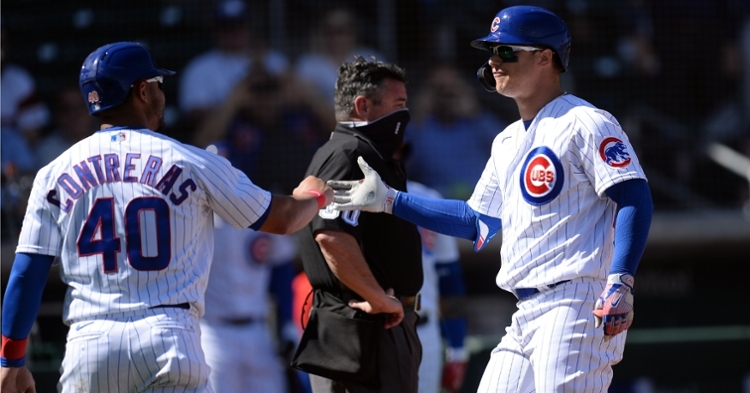 If only you could bank your spring training wins and carry them over to the regular season, right? I know that will never happen, but three games into spring training, and the Cubs are sitting at 2-0-1. Not only that, but they have also won in a variety of ways with pitching carrying the load the first two games and the offense picking up the slack on Wednesday picking up the

In his first start since replacing Yu Darvish in the Cubs rotation, Zach Davies looked pretty good as he walked one and struck out two in two innings of work. Fellow new Cub Joc Pederson provided the Cubs with some early offense as he went deep toward right-center for his first homer of the spring. Pederson always had the power potential to post gaudy numbers, but he was never given a chance to be a full-time player. Hopefully, this is the year that he lives up to his full ability.

Following the outing from Davies, Andrew Chafin was the first pitcher out of the pen, retiring the side in order. The Cubs bats continued to lead the way in the bottom of the third, with both Javier Baez and Jason Heyward grounding into RBI fielders' choices to give the Cubs a 4-0 lead. Brandon Workman had his moments where he showed his 2019 brilliance in his first appearance with his new team. However, an error opened the flood gates as the Mariners plated three runs capped off by a Jarred Kelenic homer to cut things to 4-3.

Chicago got two of those runs back in the bottom of the fourth when Anthony Rizzo unloaded for a long homer to right for his first homer of the spring.

Once again, Seattle's offense wouldn't go down without a fight as Taylor Trammel led off the fifth inning with Jason Adam's homer to cut things to 6-4. With the Cubs holding a 6-4 lead in the top of the sixth, Kohl Stewart entered the game and struggled early. After hitting the first batter he faced, Seattle rallied with a pair of singles, followed by an RBI groundout, and just like that, it was 6-6. Stewart settled down to get out of the inning.

Hoping to retake the lead in the bottom of the sixth, Brennan Davis took a pitch to the head, which was followed by a Chase Strumpf walk putting two men on and no outs. Taylor Gushue followed that up with a walk of his own as the Cubs had the bases loaded with no outs. Alfonso Rivas kept the train rolling as his walk not only gave the Cubs the lead 7-6, but it proved to be the game-winner as James Norwood finished things off in the seventh.

Michael Hermosillo added some insurance in the bottom half of the seventh, cranking a solo shot for the Cubs third homer of the day and third of the spring for the Cubs as they were in front 8-6.

Despite some command issues in the eighth, Juan Gamez worked out of trouble, but the two-run Jake Reinheimer homer of Tommy Nance in the ninth help things end in an 8-8 tie.

Pederson does have an excellent swing: Losing Kyle Schwarber was hard for Cubs fans to fathom, but if he can bring with him the power he has displayed, it will be an excellent addition for this team. Pederson has a pretty swing, and when he connects, the ball jumps off his bat. That was precisely what happened in the first inning as he took a pitch up and away and put it over the fence in right.

Hopefully, this is a sign of things to come for the season, as Pederson has never been an everyday player. The more he does what he did today, the more chances he has to play every day, making the Cubs lineup that much deeper.

Our first home run of the spring belongs to @yungjoc650! pic.twitter.com/JBVvrybh0r

Brennan Davis will be fun to watch: He may not have any hits yet this spring, but Davis has seen action in all three games thus far. He displayed his raw power on Monday with a long flyout to the warning track and then showed off his speed today by swiping second base in the sixth.

Davis is considered the Cubs' top prospect in the system, depending on what publication you look at. He has a high ceiling, and his future is bright. Hopefully, this isn't the only time Cubs fans see him this season.

FOR THE LOVE OF GOD STOP HITTING BRENNEN DAVIS pic.twitter.com/kyuPk9wwl5

Pitching not only has depth but could be better than advertised: Say what you want about the moves the Cubs made this season, but they were made to add depth. Having as much as possible is a great thing, especially early in the season when a lot of muscle injuries happen.

Through three spring games, the Cubs have used plenty of their arms and still haven't used everyone in camp. Some are prospects, some have been roster fringe guys, and some are ticketed to break camp with the team. For the most part, everyone on the mound has looked good both command-wise and success why.

This area was a concern going into the season, and it will remain a concern through the rest of spring. However, if the pitching holds up and the offense continues to hit, this team will surprise everyone this year.