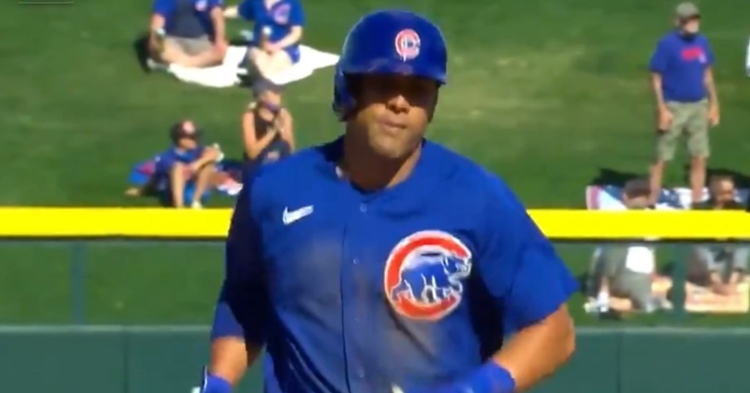 Ortega with the rare walk-off homer against the A's

Walk-off wins are always fun, no matter what time of year it is. Walk off grand slams, now that is even better. Down 8-5 against Oakland in the bottom of the seventh inning, the Cubs loaded the bases with one out as they tried to rally. Rafael Ortega changed the game's outcome with one swing of the bat, depositing a pitch into the right-field berm for the 9-8 walk-off win.

Trevor Williams made his second start of the spring, and despite allowing a Chad Pinder double in the top of the second, got through three innings allowing just that one. Williams walked one and struck out a pair as his excellent start to the spring continues. In his first game since signing with the Cubs, Eric Sogard tied things up in the bottom of the second with an RBI single to right.

Making his second appearance of the spring, Craig Kimbrel continued his rough spring, allowing a leadoff homer to Matt Chapman. He then settled down to retire the next three hitters, but Kimbrel hasn't looked great in his first two outings. The back-and-forth affair continued in the bottom of the fourth when Joc Pederson launched his third homer of the spring to dead center tying things up at 2-2. Competing for the second base job, Ilderamo Vargas ripped a single to right as Jason Heyward capitalized on aggressive baserunning off an error to put the Cubs up 3-2.

Jonathan Holder is someone who wants to erase his outing as he struggled in his inning of work.

After allowing a two-run double to Pete Kozma, a Matt Olson double, Oakland now had a 5-3 lead. Holder was tagged for 3ER in just 1/3 of an inning. Once again, the Cubs continued to rally at the bottom of the fifth, with Pederson and David Bote picking up RBI doubles to tie the game. Unfortunately, the Cubs had two runners thrown out at home as the inning could have been much better.

Both Dillon Maples and Jake Jewell saw an inning of relief down the stretch, but much like many relievers on Tuesday, they struggled to close things out, with Maples allowing one run and Jewell allowing two putting the Cubs in an 8-5 hole. Down to their final at-bats, Jose Lobaton got the rally started with a one-out single.

Chase Strumpf followed that up with a walk putting two runners on for Chicago. After a lengthy battle that saw Abiatal Avelino foul off several pitches, Avelino came through with a blooper to left, loading the bases for Ortega. Hoping for a double play, Nik Turley hung an off-speed pitch low and inside, and Ortega knew what to do with it launching it for the game-winning walk-off grand slam.

The win moves the Cubs to 6-2-1 on the spring, with Alec Mills getting the ball Wednesday.

Trevor Williams could be an X-Factor

Williams is coming off a terrible 2020 and a bad 2019. However, in 2018 Williams was emerging as a quality arm in the Pirates rotation. Hoping for a bounce-back season this year, both Williams and Cubs pitching Coach Tommy Hottovy got him in their pitching lab to digest what looks to be an improved slider.

The work is evident as Williams slider looks much better now than it has before. When I look at this signing, it reminds me a lot when the Cubs brought in Jason Hammel. Much like Williams, Hammel was struggling to win games at the MLB level. As soon as he got to Chicago, he put together three of the best, if not the best, seasons of his life while anchoring the back end of the Cubs rotation. Maybe a change of scenery will allow Williams to do the same.

Is it too early to worry about Kimbrel?

Across the last decade or so, Craig Kimbrel has been one of the most dominant closers in baseball. Not only that, his career strikeout per nine innings ratio is the best all-time among relievers as he was ticketed for the Hall of Fame. However, those days seem long gone as he has gone downhill since the 2018 World Series.

Since arriving in Chicago, Kimbrel's time has not gone well. He had no spring training in 2019 and didn't pitch until late May. He then struggled to get people out, eventually missing time with an injury down the stretch. 2020 was the same for Kimbrel at least early on, but he looked like the Kimbrel of old in September after a few mechanical adjustments.

David Ross recently named Kimbrel the closer, but after his first two outings, this spring is it too soon to worry. The velocity is back in the 98 MPH range, which is a good thing, but he struggles to locate his pitches once again. When that happens, you get the results you have seen not only this spring but his entire Cubs tenure. Hopefully, he can iron out the kinks before April 1.

Matt Chapman is not messing around. He takes Craig Kimbrel deep to center for his second homer this spring. pic.twitter.com/8SWvS2KTcO

Rafael Ortega is the MVP of spring so far

While Pederson may be stealing the headlines along with Nico Hoerner for regular players, Ortega may be the team MVP so far this spring. Not only does he have a walk-off grand slam to his name, but he cleared the bases with a bases-loaded triple earlier this spring as he leads the team with eight spring RBIs.

Signed as a minor league free agent this offseason, Ortega was given an invite to spring, and many thought he would open the season for AAA Iowa. While I still expect that to be his destination, should he continue to hit and drive in runs as he has so far, the Cubs will have a tough decision to make. Ortega is versatile, where he can play all three outfield spots adding plus speed and a decent bat in the process. Let's see how he continues his spring.