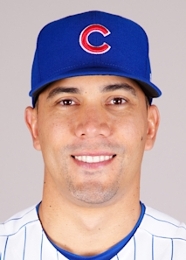 2020
Rafael spent the entire season with the Atlanta Braves at their Alternate Training Site and did not appear with the major league club.

2018
Split the season between Miami and the organization's Triple-A club in New Orleans...Collected 10 triples with New Orleans to set the club's single-season record...Began the year with the Baby Cakes, before the Marlins selected his contract on 8/10…Remained with Miami for the remainder of the season, appearing in 41 games and making 30 starts in the field (19 in right field, 11 in left field)...Made his MLB season debut on 8/10 vs. NYM, his first action at the big league level since 2016...Collected three outfield assists...Played all three outfield positions at Triple-A.

2014
In 2014 with Double-A Springfield, his 16 outfield assists ranked second in the Pacific Coast League... Claimed off waivers by the Cardinals from the Rangers, Jan. 6, 2014.

2011
Made the jump to Low-A Asheville, where he spent the entire season as the starting center fielder and leadoff hitter for the Tourists...set career highs in games, at-bats, runs, hits, doubles, triples, home runs and RBIs...was second on the Tourists with a .294 batting average, a mark that was also ninth-best in the South Atlantic League...led Asheville and tied for third in the SAL in triples and also led the Tourists with his 32 stolen bases and 141 hits...after the first month of the season, his average never dropped below .250.

2010
Spent his first season in the States with Rookie Level Casper, where he was named a Pioneer League Mid- and Postseason All-Star...led the Ghosts in average, games, at-bats, runs, hits, stolen bases and starts in the outfield...also led the Rockies system and was fourth in the Pioneer League in average while his 23 stolen bags, 69 runs and 103 hits were second-most in the PL.

2009
Played his entire second professional season with the DSL Rockies as the everyday center fielder...was named to the DSL All-Star team as an outfielder for hitting .324 (83-for-256) with seven doubles, eight triples and 39 stolen bases...his 39 steals were the fourth-most in the DSL, while his .324 average was the seventh-best in the league...played the majority of the season as an 18-year old, and finished with more walks (32) than strikeouts (23)…his .809 OPS was the best on the club.