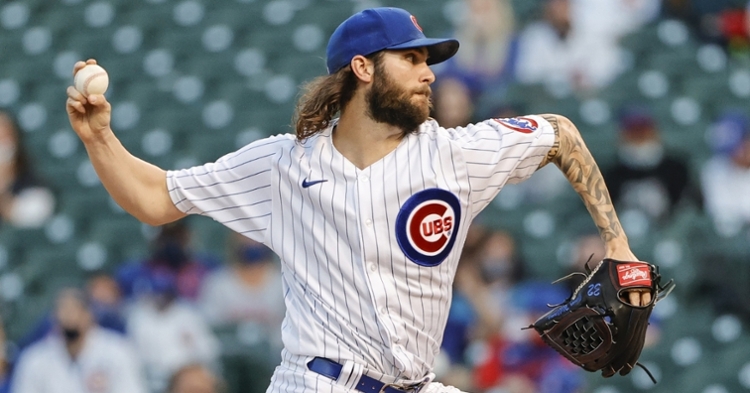 It took four games into the 2021 season, but the Cubs played their first night game in front of the Wrigley Field fans. Pegged against them were their rivals to the north as Milwaukee took on the Cubs in game one of nine April meetings.

With 19 games against Milwaukee and nine of them coming in the first month, it is imperative that the Cubs get off to a fast start. Not to mention they have 72 more meetings against their Central Division opponents, so these are the games the Cubs need to win to make headway towards the postseason.

After losing their season opener, the Cubs have responded in a big way, winning their last three, including a 5-3 win over Milwaukee. Trevor Williams was great, the Offense delivered when they needed to, and the Bullpen survived a rough seventh inning to hold off Milwaukee late. Here are some takeaways from the game last night.

What a night for Trevor Williams

When the Cubs saw Jose Quintana, Yu Darvish, Tyler Chatwood, and Lon Lester this past offseason, there were a lot of questions surrounding the rotation and what direction they would go. Chicago brought in guys like Jake Arrieta, Zach Davies, and Williams with hopes of weathering the storm but even still, the questions about the rotation were going to pop up.

So far, those questions have been answered, and right now, the rotation looks like it could be better than some thought. Going back to spring training and the three names mentioned above were the three best starters all spring, and that continued into their first starts of the new campaign. No one was more impressive than Williams as he showed what he is capable of.

After an up and down career with Pittsburgh, Williams hopes the injury history and inconsistency are long gone. When the Cubs signed Williams, it reminded me a lot of the Jason Hammel acquisition in 2014, where he went on to have his best seasons as a pro. Maybe Williams is set to take on that similar path.

In front of his father, who grew up a Cubs fan, and several friends, Williams was simply brilliant, giving the Cubs all they could ask for and more.

Trevor Williams and his Dad, Richard, react to that inning-ending double play. pic.twitter.com/EbrgNC5yeV

Not only did he allow just two earned runs in six-plus innings of work, but he was perfect through five innings as Milwaukee was guessing all game. If this is something that will continue, the Cubs will be better than what most think across the board.

A well-deserved standing ovation for Trevor Williams in his #Cubs debut. ???? @MeLlamoTrevor

When you look at the Cubs offense so far, you can see they are somewhat hitting but not at the level fans would like. With another five-hit showing last night, three of the Cubs first four games have seen them deliver five hits or less. However, hitting the ball is all well and good, but sometimes it is about the quality of hits, not the quantity.

Despite not crushing the ball to this point, the team is off to a 3-1 start, so they are finding ways to win games. Yes, it would be nice to see them have a game with 10 plus hits, but if most of those hits are singles, what good would it do? That is why the quality of hits matters as four of the Cubs five hits produced all five runs in the contest.

Three of those hits came on homers from Willson Contreras, Javier Baez, and David Bote in the fourth inning, with Eric Sogard adding an RBI triple in the seventh. That is the definition of cashing in when it matters as they only needed four hits to score five runs as they continue to come up with big hits to start the year.

Andrew Chafin could be this year's X-Factor

After watching Craig Kimbrel pitch over his first two outings, many people feel he is going to be the X-factor this season. I can see why fans think that, but this is what he expects from himself when you look at his track record. There is another guy who has been used plenty this season, and so far, he has been even better than Kimbrel out of the pen.

That man is the lefty Chafin, who the Cubs acquired at the trade deadline in 2020. After missing most of his first season with the Cubs recovering from a finger injury, Chafin got into some games the final two weeks of the season. He showed signs of becoming the reliever that pitched so well with the Diamondbacks.

He then resigned with the Cubs this season and, so far, has been simply brilliant in relief. Last night in just 1 1/3 inning, Chafin struck out all four hitters he faced, including Christian Yelich and the side in the eighth inning. Known as a lefty specialist, Chafin has now appeared in three games this season, striking out five of his last six batters and six hitters in total.

With limited left-handed options to this point, Chafin will be a valuable piece for the Bullpen not only now but all season long. He will often be used when it comes to lefty vs lefty matchups, but he shows that he can face hitters on both sides of the plate. Take the stamina and ability to throw a lot of innings out of the equation, and he gives the Cubs the possibility of their first multi-side lefty since Travis Wood and Mike Montgomery.

It’s the early 1900s and Andrew Chafin isn’t a Major League pitcher. What is he? Moonshiner? Gold prospector? pic.twitter.com/oyEykgulOE