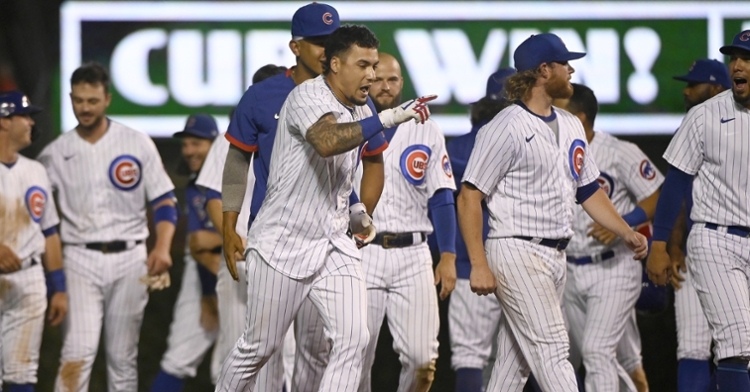 CHICAGO — After not starting in Monday's game due to a bruised heel, Javy Baez was brought on to pinch hit against his archenemy, Amir Garrett, and needed just one pitch to walk it off for the Chicago Cubs (50-51). The Cincinnati Reds (51-49) were a woeful 1-for-13 with runners in scoring position and squandered a golden scoring opportunity in the top of the eighth. The Cubs took advantage and won 6-5 in come-from-behind fashion at a lively Wrigley Field.

Patrick Wisdom showed off his cannon of an arm with a dart to second in the top of the first. Wisdom fielded a ball hit near the left field line by Jesse Winker and threw Winker out, with David Bote applying the tag. Anthony Rizzo skied a first-inning bomb for the second game in a row, taking Wade Milly deep on a 411-foot two-run shot to right-center. Kris Bryant, who reached on an infield single that ricocheted off Miley's glove, was plated by Rizzo's homer.

Kyle Hendricks gave up a leadoff jack to Joey Votto in the second, with the 415-footer to right putting the Reds on the board. Kyle Farmer tripled into the right field corner with two outs but did not score. Jake Marisnick began the bottom half of the inning with a ground rule double to left that ended up in the ivy. Like Farmer, he was left stranded, though. Miley tallied a leadoff single in the third. Three straight singles loaded the bases for the Reds with no outs. A sacrifice fly by Votto, which pushed Miley across, provided the half-inning's only run.

Next time you're getting a haircut, get some bangs in honor of Joey Votto. pic.twitter.com/Z6F3sg4oMT

Following a two-out walk of Wisdom in the third, Bryant, who led off with a walk, scored from second on a base knock by Bote. Farmer plowed a game-tying long ball to left in the fourth. Wisdom then adjusted on the fly after misreading a liner hit by Tucker Barnhart and hauled in a leaping catch. Not to be outdone, Bote pulled off a sliding stop of a Miley grounder and fired a throw to first for the third out.

Nico Hoerner kicked off the bottom of the fourth with a single and made it to second on third via a wild pitch and sacrifice bunt by Hendricks, respectively. Willson Contreras then hit a ground ball that Hoerner attempted to score on, only to get thrown out at home. Following a two-out walk of Rizzo, Matt Duffy lined out with the bases juiced.

The Reds once again loaded the bases without suffering an out in the fifth. Hendricks walked Joey Votto to force in Jonathan India. Adam Morgan relieved Hendricks soon afterward and jumped up in a valiant attempt at fielding a chopper hit by Tyler Stephenson. Winker crossed the plate on the fielder's choice. Bote fielded the bouncer after it got by Hoerner, resulting in a force out at second. In the home half of the fifth, Miley was pulled with one outs and the bases filled, and Tony Santillan then forced Jason Heyward to ground into a double play.

Rex Brothers pitched a 1-2-3 top of the sixth for the Cubs. In the bottom of the sixth, Santillan gave up a single to Rizzo but collected three swinging strikeouts. Another three up, three down inning for Brothers in the seventh was followed by former Cub Brad Brach giving up a two-out RBI single to Hoerner. The base hit was initially ruled a diving catch by center fielder Shogo Akiyama. However, a successful Cubs challenge overturned the call. Bote, who walked and took second on a sacrifice bunt by Marisnick, scored on the play. An ensuing successful Reds challenge saw the inning end with Hoerner getting caught stealing.

Keegan Thompson was backed into a corner when a single, catcher's interference and a walk culminated in the Reds loading the bases with no outs. Two strikeout and a flyout followed, with Thompson escaping the jam. Contreras made the most of the Reds failing to add to their lead by lofting a game-tying solo shot out to left-center in the eighth, which he celebrated with a bat toss. Craig Kimbrel allowed the first two batters to reach in the ninth but struck the next three out. A wild pitch moved the runners to second and third with two outs, with Kimbrel then ringing up Akiyama.

Kimbrel was fired up after preventing the Reds from regaining the lead, and Baez was even more fired up when he gained the the Cubs the win. Wisdom was walked by Heath Hembree at the start of the bottom half of the ninth, and Bote then nearly ended the game when he flied out to the warning track. Ian Happ drew a base on balls thereafter, and Hoerner was hit by a pitch, which loaded the bases with one out and chased Hembree from the game. Baez entered once Garrett was announced as the new pitcher, and he proceeded to bark at Garrett as he dug in at the plate. On the first pitch of the at-bat, Baez hit a walkoff single to deep center and let Garrett hear about is as he meandered up the baseline after solidifying a 6-5 Cubs victory.