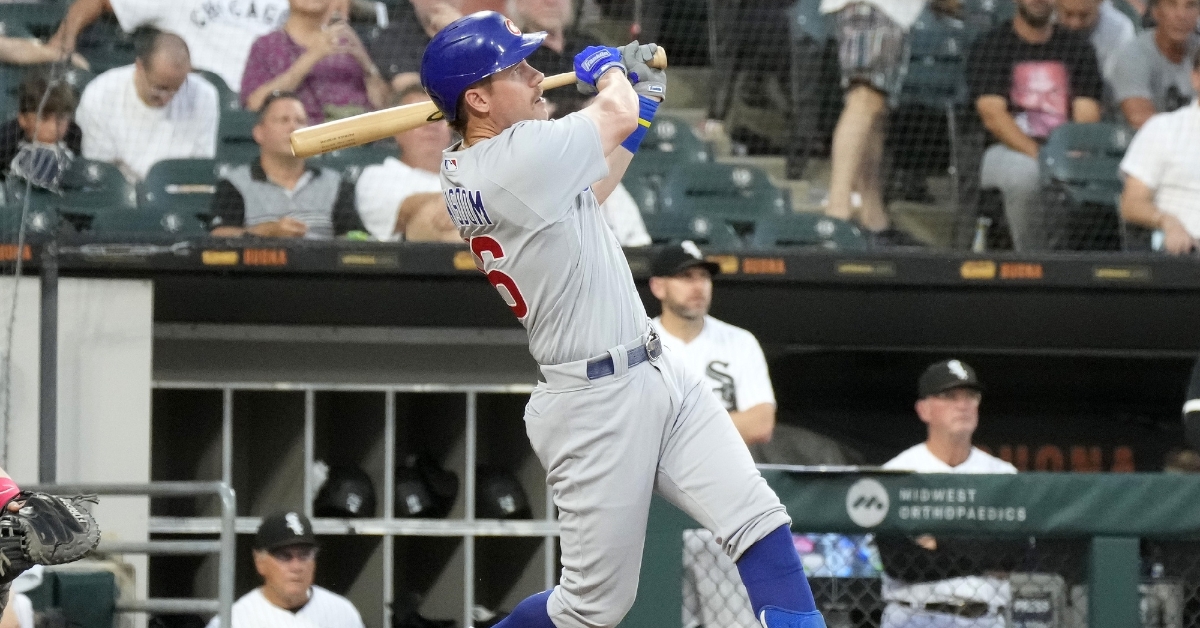 CHICAGO – After getting swept at home in round one of the Cross-town Cup, the Chicago Cubs (56-74) headed south to Guaranteed Rate Field to meet the Chicago White Sox (75-55) for round two of the Cup. Making his second start since returning from Iowa and the third start of the season was Keegan Thompson as he was set to face the lefty, Dallas Keuchel.

Neither one of the starters had their best day on the mound, with Thompson going just two innings and being charged with four earned runs, while Keuchel made it through just one inning, surrendering five earned runs. This is not the same Keuchel the White Sox saw last season, and the Cubs made him pay early, with Patrick Wisdom setting the tone early with a long three-run shot to left to give the Cubs a quick 3-0 lead.

That homer seemed to open the flood gates for the Cubs as they continued to score early and often in the first, with Robinson Chirinos connecting for an RBI double while Austin Romine added an RBI single to push the lead to 5-0. The Cubs would add a sixth run off an error later in the first as they held a 6-0 lead on the White Sox after just one at-bat.

Despite being given a big lead, Thompson knew he would be facing a tall order with this White Sox lineup and immediately saw them cut into the lead in the first three innings. After Jose Abreu singled home the White Sox first run in the first, he turned around and doubled home another run in the third to make things 6-2. That was just the beginning as the White Sox scored eight times in that inning to take a 9-6 lead.

Yoan Moncada and Eloy Jimenez picked up RBI singles while Andrew Vaughn reached on an error to keep the line moving. The big blow in the third came off the bat of Yasmani Grandal, who returned from the IL in a big way. His three-run shot tied things up 6-6 before more runs came as the Sox held a 9-6

lead and didn't look back.

In the fifth, the White Sox continued their offensive assault with Luis Robert getting in on the fun with an RBI single before Moncada added an RBI groundout to extend the lead to 11-6. That set the stage for Grandal once more, doubling home two more as the White Sox scored 13 unanswered runs and led 13-6 at this point.

Give the Cubs some credit as they refused to back down despite what that scoreboard said, with Michael Hermosillo going deep in seventh to pull within 13-7. After a Vaughn single made it 14-7, Ian Happ doubled home the Cubs next run in the eighth, before the Jason Heyward double brought the Cubs within 14-10.

Whenever the Cubs seemed to have momentum on their side, the White Sox, or should I say Grandal had an answer as he finished off his impressive game with another three-run shot in the eighth inning to make things 17-10. The Cubs continued to show terrific fight in the ninth with Wisdom going deep for the second time in the night.

Happ adding a homer of his own, but it still wasn't enough as the White Sox topped the Cubs 17-13.

The White Sox are a fascinating team to watch and should be considered one of the favorites in the AL to reach the World Series. Not only are they 20 games above .500, but they continue to have the largest division lead in baseball as we approach September. They have done this with an amazing offense filled with young talent and a pitching staff that ranks near the top in the American League.

To make things more impressive, they have done this without being full-strength, as injuries have taken their toles on this team this season. With the return of Grandal to the lineup on Friday, it meant the White Sox would be at full-strength for the first time offensively in 2021, and Grandal didn't miss a beat driving in eight RBIs in his return.

We knew how good this offense could be, but I feel for the rest of the league if this is what to expect now that they are at full strength. The White Sox continue to show they run Chicago baseball this season as they improved to 4-0 against the Cubs and took the 2021 Crosstown Cup.

Not the same Keuchel

For whatever reason, the 2021 version of Keuchel is not what the White Sox saw in 2020. After signing him to a free-agent contract in 2020, Keuchel went out and had a solid season landing himself as one of the top arms in the rotation. Shortened season or not, he still posted a 1.97 ERA for the year and dominated hitters all season.

Fast forward to this season, and he has now become the weak link in that rotation as his ERA has risen to 5.00 following his outing. For whatever reason, Keuchel can't deliver the way he has done in the past, and that is a growing concern for the White Sox with the playoffs on the horizon.

You want your best four starters in the rotation come playoff time, and Keuchel is not one of those four at this moment. Ideally, the White Sox want Keuchel in the rotation come postseason, given his experience in big games. Unless he turns things around quickly, you can forget about that as the White Sox have plenty of depth and options to go around.

From what I can tell, that was the shortest start of Keuchel's major league career. Only briefer appearance was a 0.2 IP relief outing in August 2013.

The most challenging part of the second half for the Cubs is not replacing the players they traded away, but building a pitching staff for the future. With Adbert Alzolay rehabbing a hamstring injury and Zach Davies having a rough season, the Cubs have had Kyle Hendricks and Alec Mills as their most trusted arms, and even Mills is coming off a rough start last time out.

With Trevor Williams and Jake Arrieta being dealt and released in the past month, the Cubs elected to focus on their future by giving Justin Steele and Thompson spots in the rotation during the stretch run. It shouldn't come as a surprise when both pitchers were starters in the minors, but given they were relievers all season until recently, this is a learning curve for all involved.

Thompson found out firsthand how difficult pitching to major league lineup is as a starter coming off four scoreless starts with Iowa. When you don't have the arm strength build-up to get through five innings at this point, it is going to take near-perfect execution to get the job done.

The Cubs have seen Steele show flashes of that, but the fourth inning is the one that does him in all the time. On the other hand, Thompson continued to take his bumps and took one on the chin against a tough lineup last night. These are the starts the Cubs want him to take this season because it will only make him better next season and beyond.

Keegan Thompson takes the mound for the @cubs on tonight's #MLBNShowcase.@Plesac19 explains why he reminds him of @joshbeckett! #TheRundown pic.twitter.com/TxS9DY80Ho