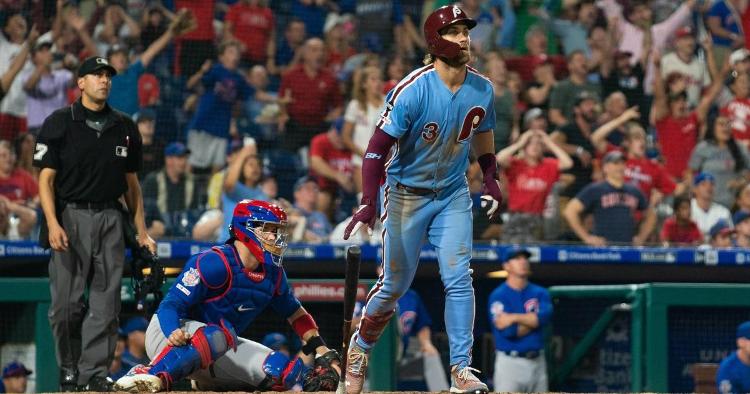 Phillies right fielder Bryce Harper has been selected as the 2021 National League Most Valuable Player as voted on by the Baseball Writers’ Association of America. This is Harper’s second career MVP Award, having previously been selected in 2015.

“To be able to win this award again means so much to me personally,” said Harper. “I take pride in giving my all every time I’m on the field and playing the game the right way. I have great teammates and an incredible fan base who pushed me all season and helped bring this award back home to the great city of Philadelphia.”

“What Bryce did this season was extraordinary,” said Phillies Managing Partner John Middleton. “With this award he joins a fraternity of some of the greatest players to ever wear a Phillies uniform. I am so happy for Bryce that his historic 2021 season is being recognized with numerous honors and the pinnacle of them all, the Most Valuable Player Award.”

Harper led the majors in slugging percentage, OPS (1.044) and OPS+ (179) and he led the National League in doubles, extra-base hits (78) and Win Probability Added (4.74). Harper and Vladimir Guerrero Jr. were the only two players in MLB this season to post a .300/.400/.600 slash line as Harper became just the fourth Phillies player since 1900 to do so, joining Ryan Howard, Chuck Klein and Lefty O’Doul.

In addition to being named National League MVP, Harper was the NL recipient of the Hank Aaron Award, given annually to the best overall offensive performer in each league, as voted on by a panel of Hall of Fame players and fans. Further, Harper was selected by the Major League Baseball Players Association as NL Outstanding Player of the Year, as voted on by his fellow players. He was also named a 2021 Stan Musial Award winner by the St. Louis Sports Commission in celebration of the year’s greatest moments of sportsmanship and those in sports who embody class and character. Finally, Harper won his second career Silver Slugger Award in 2021.