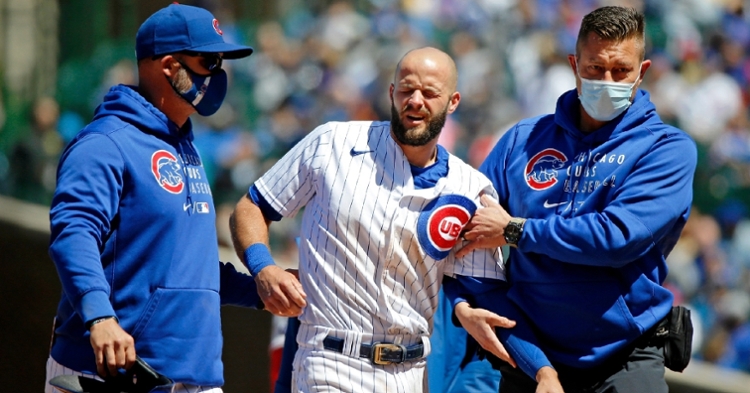 CHICAGO — The latest injury blow suffered by the Chicago Cubs involves third baseman David Bote, who injured his left shoulder while sliding on Saturday. Bote left the game in the bottom of the fourth after being thrown out at second base as part of a double play.

Making matters worse, the double play was caused by Bote attempting to break it up while sliding feet-first. He swiped Cincinnati Reds shortstop Eugenio Suarez with his right hand and then attempted to maintain contact with the bag while sliding off it, as that could have potentially prevented interference from being called.

Bote was in obvious pain after reaching back to touch second base and eventually walked off the field while favoring his left shoulder. Patrick Wisdom replaced Bote in the lineup. A successful Reds challenge of the play added insult to injury, as slide interference was called as a result, bringing about the double play Bote attempted to prevent.

Yesterday's offensive hero David Bote apparently injures his left shoulder sliding into 2nd base and is removed from the ballgame. Adding insult, he's called for interference and the runner at 1st is out, as well.@Cubs #GoCubsGo pic.twitter.com/dGtq6dYrPS

Following the Cubs' 10-2 win over the Reds at Wrigley Field, Cubs manager David Ross announced that Bote had suffered a separated left shoulder and would be undergoing further evaluation in the coming days. A shoulder separation likely means that Bote will miss substantial time, which is not good news for a Cubs infield currently dealing with depth concerns because of injuries. Third baseman Matt Duffy and second baseman Nico Hoerner are currently on the injured list, and first baseman Anthony Rizzo has missed four straight games due to injury. As for Bote, he might be out of action for quite a while.

Separated left shoulder confirmed for David Bote, will continue to be evaluated in coming days.