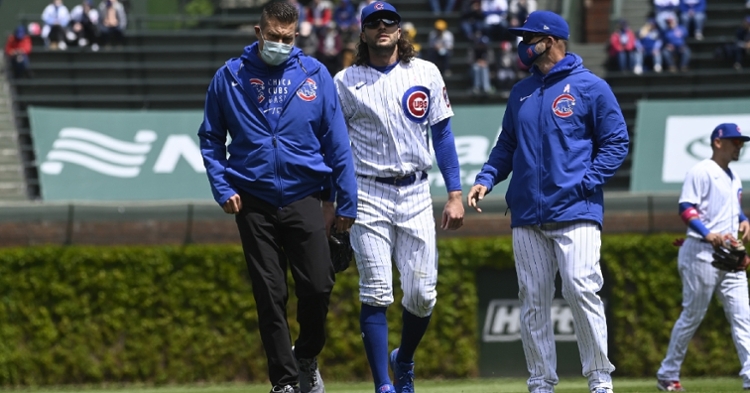 CHICAGO — Injury issues have run amok within the Chicago Cubs lately, and a pair of outfielders suffered ailments on Sunday that added to the ever-growing list of North Siders currently on the mend. In the top of the first, center fielder Jake Marisnick injured his right leg while running toward a bloop hit and fell to the ground in pain. After trainers came out to examine him, Marisnick departed the contest at Wrigley Field, walking gingerly to the clubhouse.

Defensively, Kris Bryant moved from left field to center field, and Joc Pederson entered the game to take over in left, thus replacing Marisnick in the batting order. The Cubs later announced that Marisnick had suffered right hamstring strain.

In addition, right fielder Jason Heyward was apparently dealing with an injury to his right hand late in the Cubs' 6-5 loss, resulting in right fielder Nick Martini pinch hitting for him in the bottom of the ninth. The specifics of Heyward's injury are unknown at this point, but Marisnick is set to undergo testing on Monday that will provide a clearer picture of his injury situation.

Jake Marisnick will undergo testing tomorrow to determine full extent of right hamstring injury. Jason Heyward, who was pulled for a pinch-hitter in the 9th inning, has an issue with his right hand. Cubs already on the injured list include Ian Happ, Nico Hoerner and Jake Arrieta.