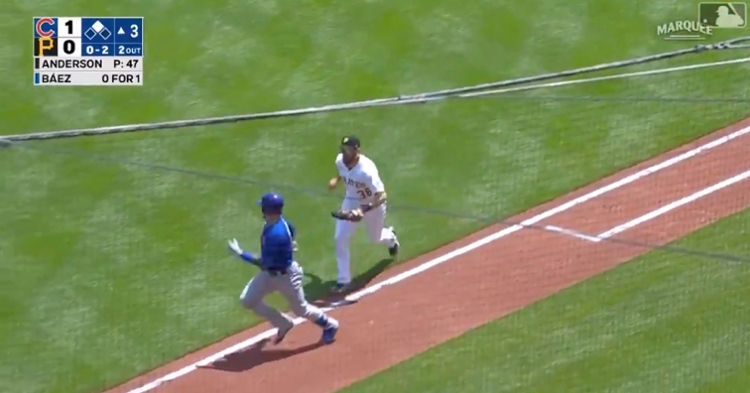 Instead of simply stepping on the bag and ending the inning, Will Craig decided to chase Javier Baez, which set off a chain reaction of chaotic events.

PITTSBURGH – What started off as carefree laughter for the Pittsburgh Pirates' television broadcasters on AT&T SportsNet Pittsburgh abruptly changed into consternation and ended up as sheer, utter disbelief. That was the evolution of the commentary on the broadcast as Chicago Cubs shortstop Javier Baez pulled off perhaps the most unbelievable baserunning feat by an MLB player in quite some time on Thursday.

When Baez was jogging away from Pirates first baseman Will Craig and toward home plate in a game of cat-and-mouse, the announcers for the Pirates chuckled at Baez's antics. Then, when Cubs catcher Willson Contreras began darting for the dish, the realization that Baez's ploy might pan out occurred.

"Well, actually, [we] shouldn't be laughing, as it's not a bad idea," the play-by-play announcer said with a hint of concern in his voice.

Once Contreras slid in safely, Baez still had to make it to first base safely for the run to count because there were two outs when he hit the ground ball to third base that sparked the frenetic sequence. Baez proceeded to reach first, with a throwing error committed by catcher Michael Perez helping his cause.

"There's nobody at first base," the dumbfounded color commentator exclaimed just as Perez fired an errant throw to second baseman Adam Frazier, who was not yet covering the bag.

From there, Baez reached second and then scored on an RBI single hit by center fielder Ian Happ. The Cubs went on to beat the Pirates 5-3, earning a three-game series sweep at PNC Park, and Baez's heady baserunning stole the show. The Pirates' announcers were flabbergasted by the incredible play, with the play-by-play man speaking for all viewers in describing it as "unbelievable."

"[I have] never seen that before," he stated. "Never. Javier Baez just stole a run for his Cubs."