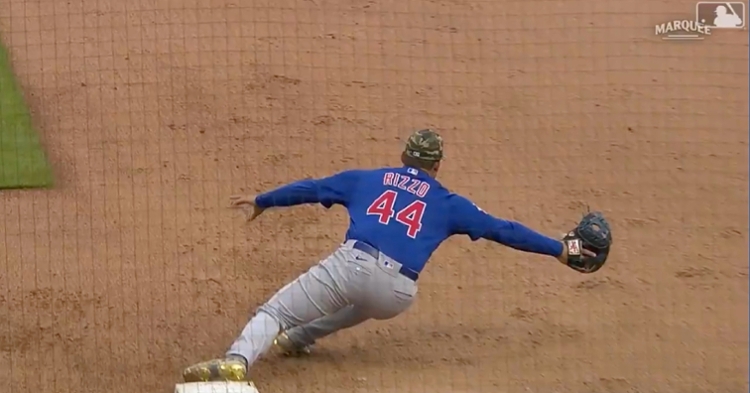 Anthony Rizzo fully extended in order to make a catch at first base that bailed out Javier Baez.

DETROIT — Fittingly, while making a Gold Glove-caliber play, the gold bottoms of Anthony Rizzo's fancy cleats were captured on camera due to how far the flexible Chicago Cubs first baseman stretched off the bag in order to make a catch. Rizzo lived up to his reputation as a four-time Gold Glove Award winner by bailing out shortstop Javier Baez with an incredible effort to remain on the base while gloving a shaky throw from Baez.

Reliever Justin Steele forced Detroit Tigers catcher Eric Haase to hit a grounder to Baez in the bottom of the fifth on Saturday. With the Cubs clinging to a 7-6 lead at Comerica Park, Baez charged the slow roller and proceeded to hurl a somewhat off-the-mark throw to Rizzo.

Channeling iconic claymation character Gumby, as color commentator Jim Deshaies so aptly referenced on the Cubs' television broadcast, Rizzo leaned about as far off the bag as humanly possible while keeping his left cleat on the base and was miraculously able to glove Baez's throw while falling down. The spectacular defensive feat epitomized just how well-rounded Rizzo's defensive acumen is, and the athletic putout prevented the Tigers from putting a runner on base in what ended up being a scoreless half-inning.