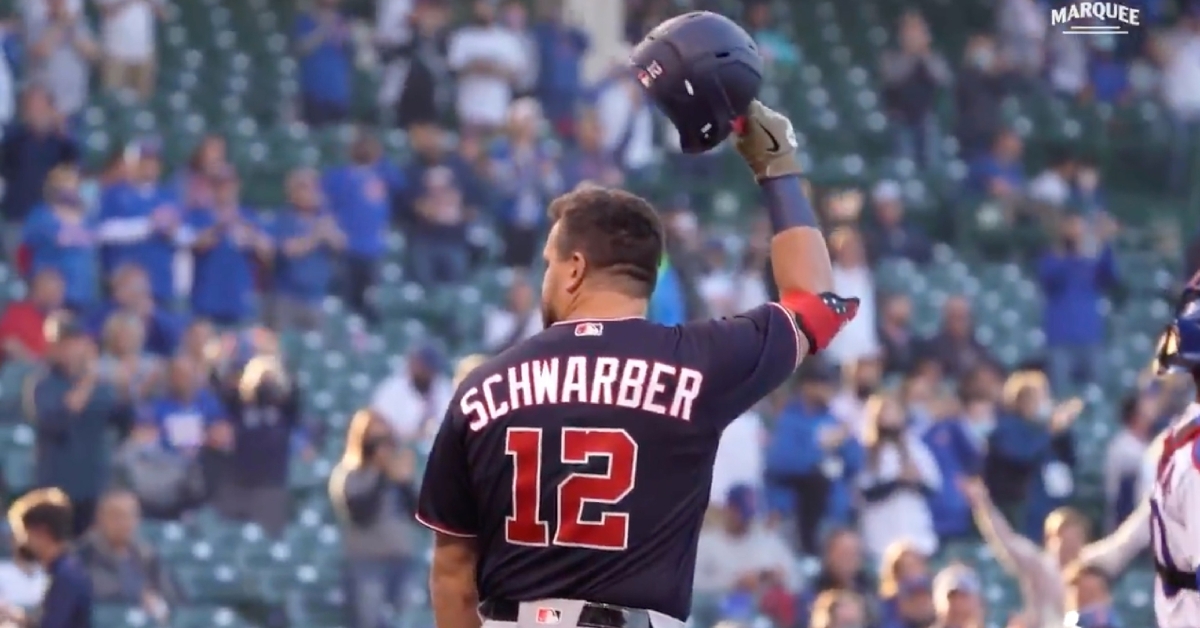 Kyle Schwarber saluted the crowd prior to his first at-bat back at Wrigley Field.

CHICAGO — In the offseason, starting pitcher Jon Lester and left fielder Kyle Schwarber departed the Chicago Cubs, the team both players suited up for from 2015-20, and joined the Washington Nationals in free agency. Therefore, Monday's first meeting of the season between the Cubs and Nats marked the return of both Lester and Schwarber to Wrigley Field.

Lester started on the mound, and Schwarber started in left field. As fan favorites and team leaders on the 2016 Cubs team, which won the World Series, the two erstwhile North Siders were expected to receive standing ovations from the Cubs faithful at the Friendly Confines, and the fans obliged.

Schwarber tipped his batting helmet to the fans and took some time to soak it all in when stepping up to the plate and hearing rousing applause in the top of the first. Following an inning-ending groundout by Schwarber, Lester tipped his cap after being showered with cheers while throwing his warmup tosses on the bump. Lester later received another standing ovation when digging in at the plate for the first time. Those special moments are certainly ones that Lester and Schwarber will treasure forever.

Jon Lester taking the mound at Wrigley again to a standing ovation pic.twitter.com/l2b03fouPo

UPDATE: Lester later received yet another standing ovation upon being removed from his start in the bottom of the sixth.

The most knowledgeable fans in baseball give team icon @JLester34 a standing ovation as he is removed from the ballgame following a Javy Baez HR blast.@Cubs #GoCubsGo pic.twitter.com/0EOTiXOXYf