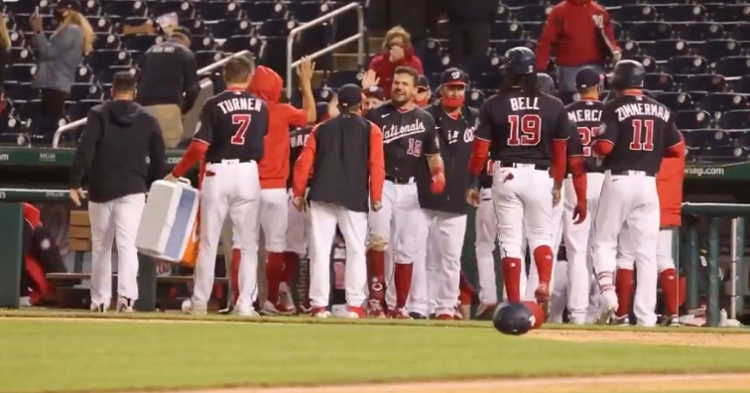 Kyle Schwarber, who joined the Nationals in the offseason, has already hit two walkoff home runs as a Nat.

WASHINGTON — Former Chicago Cubs left fielder Kyle Schwarber made a splash in the first month of his first season with the Washington Nationals by crushing a pair of lengthy walkoff home runs. Schwarber recently skied a 463-foot walkoff jack to beat the Arizona Diamondbacks at Nationals Park, and he launched another walkoff dinger at home on Friday.

Sending a 454-foot two-run blast into the center field seats, Schwarber walked it off in the 10th frame against the Miami Marlins. The Marlins took a 1-0 lead in the top of the 10th, and Schwarber wasted little time in ending the contest in the bottom half of the inning, as he crushed a leadoff shot on just the second pitch.

First baseman Josh Bell, who began the bottom of the 10th at second base, was plated via Schwarber's long ball, which came on a 95.8-mph four-seamer thrown by reliever Yimi Garcia. The blast, which provided the Nationals with a 2-1 victory, was scorched off the bat at 115.4 mph and boasted a steep launch angle of 32 degrees.

Both of Schwarber's homers this season have been of the walkoff variety, and both of them are among the longest walkoff homers of the Statcast era. After cranking the tater on Friday night, Schwarber celebrated with an emphatic bat flip before rounding the bases. He was mobbed at the plate by his elated teammates, who doused him with water to commemorate the walkoff win.

Call this HR "Dogecoin" 'cause it landed on the moon.@kschwarb12 // #NATITUDE pic.twitter.com/cLx9exuFWL