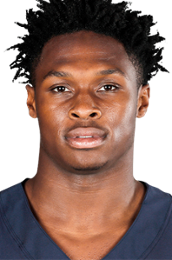 Started in nine and played in all 16 games as a rookie in 2020, finishing as the Bears second leading receiver with 61 catches, 631 yards and four TDs.
Selected in the fifth round of the 2020 NFL Draft (173rd overall) by the Bears
HIs 61 receptions as a rookie were second most all-time by a Bears rookie, only behind Matt Forte (63, 2008)
His 61 receptions are tied for fourth most ever by an NFL rookie drafted in the fifth round or later, and the most since Tyreek Hill also had 61 in 2016.

Had multiple catches in every game this season; had 61 total catches on the season, which finished fifth among NFL rookie WR leaders
With his four receptions in Week 15, he broke the record for most receptions by a Bears rookie wide receiver (Harlon Hill, 45 receptions, 1954)
His 631 receiving yards were most in a season by a Bears rookie since Willie Gault had 836 in 1983
Had a team season-high 11 receptions in Week 17. 11 receptions are the most by a Bears rookie ever in a game, breaking the previous mark of Ken Margerum (10, 1981).
Caught TDs in consecutive Weeks (14-15); a 12-yard TD in Week 14 and a 8-yard TD in Week 15
Hauled in a 12-yard touchdown in Week 14 vs. Houston
Averaged 13.3 yards per catch with 40 yards on three receptions in Week 7 at the Rams
Posted a 50-yard reception vs. the Saints in Week 8; with 5 catches for 69 yards and a touchdown
Posted five catches for 52 yards (10.4 avg) in Week 4 vs. the Colts
Caught three passes for 38 yards (12.7 avg) in his rookie debut in Week 1 at the Lions
Caught another three passes for 36 yards in the Week 2 win over the Giants, including a 15-yard touchdown from Mitchell Trubisky in the second quarter