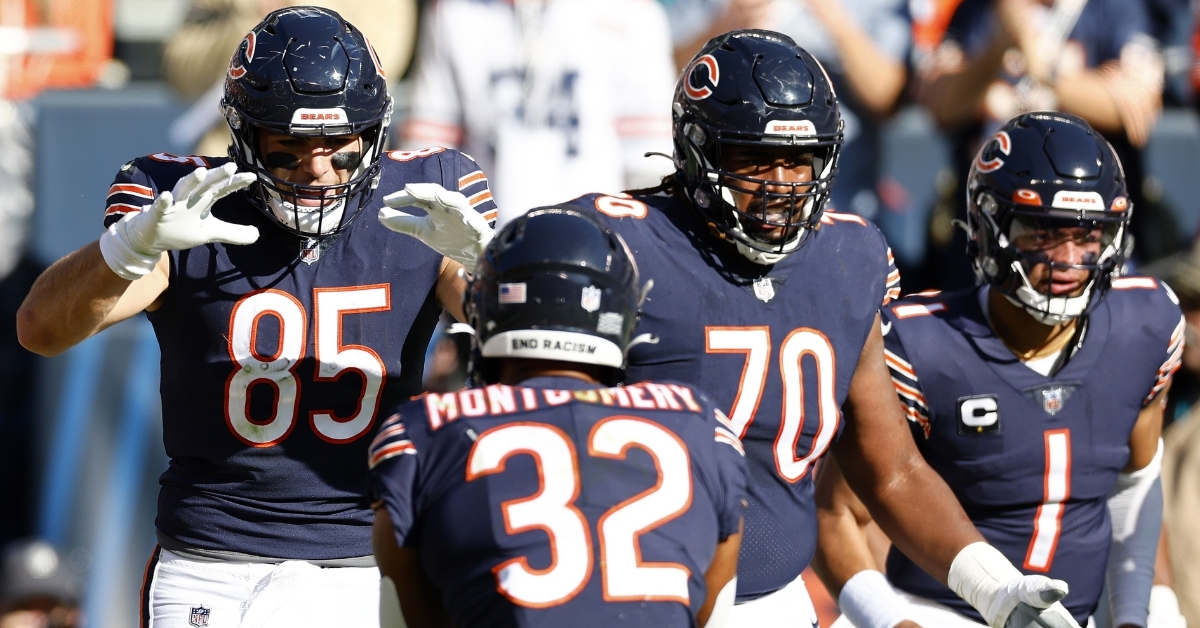 A week after dropping a high-scoring affair in Dallas, the Bears went toe-to-toe with one of the league’s most prolific offenses. The bears dropped a heartbreaker in Chicago to the Miami Dolphins, 35-32.

So let’s take a look and give out some grades based on the performances by position after the loss to the Dolphins.

Justin Fields has shown some signs of improvement in the last couple of games, and that SHINED on Sunday. Fields was accurate, completing 17-of-28 passes for 123 yards and three touchdowns through the air, his all-time record. Fields also ran 15 times for 178 yards and a touchdown as well — the most rushing yards by a quarterback ever in a game. Fields turned in his best game as a pro.

David Montgomery was okay on the ground, carrying the ball 14 times for 36 yards. He also caught one pass for eight yards. Khalil Herbert spelled Montgomery with seven carries for 23 yards. However, Fields made up for what this group lacked on Sunday. The Bears will hope to keep the running game involved as the season continues, as they are the NFL’s No. 1 rush offense.

The passing game was fairly active and third-year wideout Darnell Mooney caught seven passes for 43 yards and a touchdown. He also had one carry for two yards. Newly acquired Chase Claypool had just two catches for 13 yards, and a carry for four yards. Claypool was also on the receiving end of a missed pass interference call late in the game. Equanamius St. Brown had a crucial drop. Dante Pettis caught one pass for 12 yards. Former Patriot N’Keal Harry caught one pass for six yards. The Bears certainly have improved here.

This unit certainly has talent with Cole Kmet and Ryan Griffin. Cole Kmet led the Bears with five catches for 41 yards and two touchdowns. This unit is finally starting to shine.

The offensive line was not that bad, but they did allow two sacks of quarterback Justin Fields. They need to do a better job of keeping Fields upright, but they made up for it in the run game, opening holes for Fields, Montgomery, and Herbert all game long.

The defensive line was not good. The D-line allowed big play after big play in the run game and did not muster up nearly enough pressure on Tua Tagovailoa.

Roquan Smith has been traded to Baltimore, Robert Quinn is now an Eagle, and this unit is depleted. They sure looked like it on Sunday.

This unit was not great on Sunday. Eddie Jackson and Jaquan Brisker were active in the tackle department, but Tyreek Hill and Jaylen Waddle got whatever they wanted from the Bears' secondary. The Bears surrendered 300+ passing yards and did not take the ball away.

Kicker Cairo Santos made three extra points and a field goal. Trenton Gill nailed zero of his two punts inside the 20, and had one blocked and returned for a touchdown. Dante Pettis and Khalil Herbert were quiet in the return game.

The playcalling was better in Matt Eberflus ninth career game with the Bears. The Bears seemed to trust Justin Fields more, and it was nice to see him perform. We’ll see how the Bears respond in week 10.

Nonetheless, week 9 is in the books, and the Bears are 3-6. Next on the schedule is the Detroit Lions on Sunday.