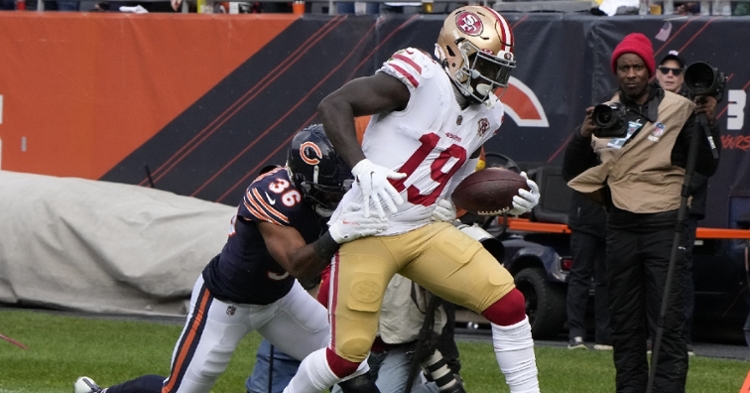 CHICAGO – It was a tale of two halves on Halloween in the Windy City as the San Francisco 49ers (3-4) traveled to meet the Chicago Bears (3-5). Stepping in for Matt Nagy, who was away from the team due to a positive COVID test, was Special teams coach Chris Tabor who was making his NFL debut as a head coach.

Through 30 minutes, Tabor and the Bears held their own as they gave the 49ers fits, holding them to nine first-half points and leading 13-9 after one half of play. The thing that stood out the most was how the Bears adjusted from Eddie Jackson leaving the game as he was injured, covering Deebo Samuel on a deep route.

Once the second half got underway, both offenses started to take off, but it was the 49ers who made more adjustments scoring on four consecutive possessions, including three touchdown drives, helping to erase the deficit and surge in front 33-22. Needing a score with less than two minutes to go, Justin Fields took a shot downfield for Darnell Mooney only to have Josh Norman intercept the pass and seal the game. It was a harsh ending to what was a massive game for Fields, who threw for 175 yards while adding 103 more on the ground.

Right from the opening possession, you got a sense of how things would go with the 49ers wasting no time driving down the field. A huge third-down completion to Mohammed Sanu kept the chains moving and had the ball near midfield. Sanu wasn't done being targeted on this drive as Jimmy Garoppolo hooked up him again for 19 yards before the Bears dodged a bullet, with Joey Slye missing a 48-yard field goal.

Looking to capitalize on the 49ers missed opportunity, Fields and the Bears offense took the field for the first time in the afternoon. Fields hooked up with Mooney for 14 yards before Khalil Herbert continued to make things happen on the ground, ripping off a 22-yard scamper. Another good run by Herbert, followed by some short passes, moved the chains, but a costly penalty nullified what could have been a better drive with Cairo Santos putting the Bears on top 3-0 with his 39-yard field goal.

Field goals were the story early as the 49ers looked to answer the Bears' first score. Elijah Mitchell got things started with a 27-yard burst moving the ball near midfield in the process. Another first down completion from Garropolo to Samuel had the 49ers near field goal range, where Slye was able to knock home a 48 yarder to tie things up 3-3.

With time winding down in the first quarter, the Bears put together an 11 play 74 yard drive that spanned parts of two quarters. Fields and Mooney continued to be on the same page hooking up for 11 yards and another first down. That completion was followed by Cole Kmet hauling in a 16-yard pass, and the Bears offense was rolling again.

Not only was Fields arm on full display, but so were his legs helping move the ball inside the red zone. The Bears capped off their drive with a Fields finding Jesse James for an eight-yard score putting the Bears back on top 10-3. The rest of the first half, so both sides exchange blows, with Slye connecting from 52 and 22 yards out while Santos added another field goal from 40 yards out to give the Bears a 13-9 lead after one half of play.

While the first half was all about field goals, the second half was a vastly different story, at least after a Santos Field goal to open the half extended the Bears lead to 16-9. Following that, it was all 49ers as they scored on four straight possessions to start the second half, including their first time touching the ball.

Entering the week facing a ton of criticism, Garropolo went out and had his best game of the season, finding Samuel for what looked to be an 84-yard touchdown only to be down at the one following a review. That didn't seem to matter to the 49ers ad Garropolo tucked it in plowed ahead for his first of two rushing touchdowns closing the gap to 16-15 following a missed extra point.

With the ball again following a Bears punt, the 49ers were given excellent field position where Garropolo hooked up with Samuel for 15 yards moving the ball into Chicago Territory. That is when Mitchell began to take over, closing out the third quarter with a few carries before finishing things off from five yards out, giving the 49ers a 21-16 lead. Brandon Aiyuk hauled in a two-point try to put the 49ers up by seven at 23-16.

In desperate need of an answer, the Bears touched the ball for just the second time in the half and did exactly what the fans needed them to do. Facing a third-down situation, Marquise Goodwin hauled in a 10-yard pass to extend the drive. Fields followed that up with a first down run of his own before finding Mooney again for a big gain as the Bears were down to the San Francisco 30 yard line. Facing a fourth and one situation, Fields used the part of his game least talked about picking up on busted coverage to run in from 22 yards out to pull the Bears within 23-22.

The missed extra point from Santos on that drive proved to be costly as it was the 49ers turn to answer. With Sanu getting things started with a 19-yard reception, Mitchell broke one off to the outside, rushing 27 yards down to the Bears 29. Since becoming the team's top RB, Mitchell continues to perform well, finishing with 137 yards on just 18 carries. Another 23-yard completion for Garropolo moved the ball inside the 10, where Garropolo finished what he started calling a read option and taking it in from five yards out to extend the lead to 30-22.

Another costly quick four-play resulted in a punt for the Bears, which proved to be the ultimate end for this team. San Francisco not only got the ball back but had a chance to ice the game with Mitchell doing his part with a 39-yard run. Later in the drive, Mitchell added another first down run to help set things up for Slye, who knocked home a 32-yard field goal to extend the lead to 33-22.

One play into their next possession saw Fields take one of his rare deep shots in the game, but Mooney could not come down with it, and Norman intercepted the pass, sealing the deal in the Bears' 33-22 defeat. Not only did Fields lead the way for the Bears with 175 yards passing, but he made things happen on the ground picking up a team-high 103 yards rushing. Herbert added 72 yards of his own, while Mooney led the way with 64 yards receiving on six receptions.

Garropolo led the 49ers under center, who completed 17-28 passes for 322 yards with no touchdowns and interceptions. Mitchell had a game-high 137 yards rushing to go with one score, while Samuel led all receivers with 171 yards receiving in what ended the 49ers four-game skid.