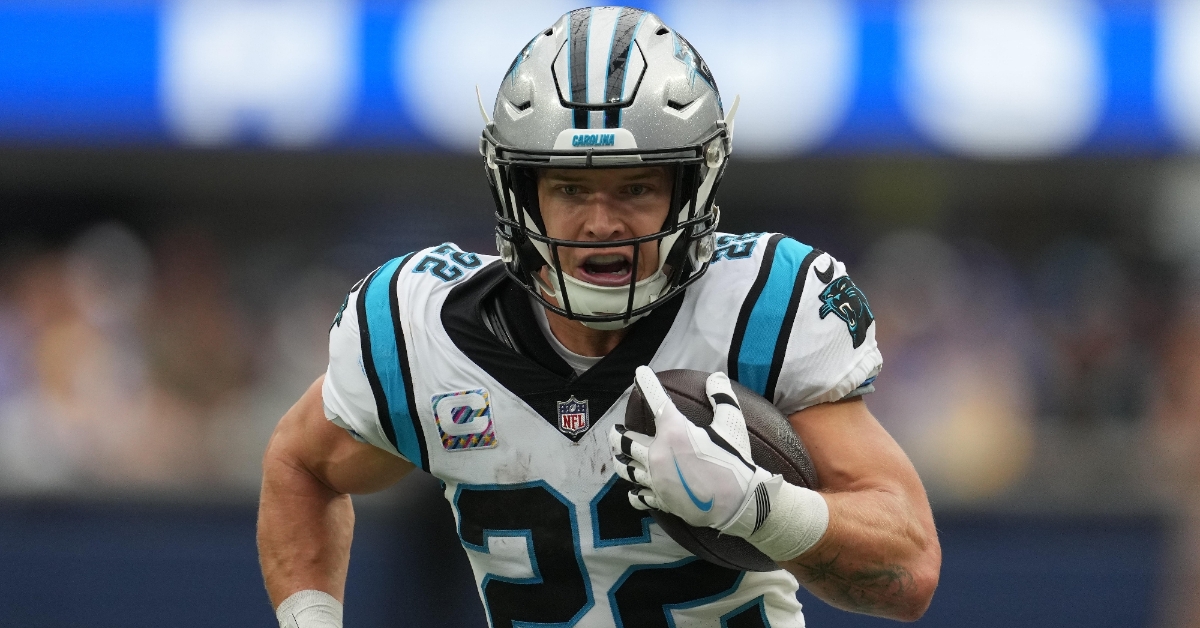 I understand things haven't gone smoothly for the Bears in recent weeks, but things could be much worse. You could be the Carolina Panthers, a team in disarray with no clear direction on where they are heading.

What started with Baker Mayfield getting hurt after struggling through five games was followed up by Matt Rhule getting fired and replaced by interim head coach Steve Wilks. A few days later, Robbie Anderson and his position coach got into it not once, but twice, forcing Wilks to remove him from the Rams game.

Less than 24 hours later, Anderson was on the move as he has now been traded to the Arizona Cardinals. Clearly, things are not fun in Carolina right now, and there could be more turnover on the way. Fans have already heard the Bears linked with WR DJ Moore as a possible trade option, but could they get involved with an even bigger piece?

Carolina has made it clear that they will listen to trade offers on Christian McCaffrey, and there will be teams lining up looking to add him. While it is a long shot that the Bears even have a shot, they need to be one of these teams getting on the calls and doing what it takes to make something happen.

No one will argue the talent McCaffrey brings to the table as he is arguably one of the most, if not the most, complete RB in the game today. His problem has always been health, as he has missed nearly as many games as he has played. When healthy, he is not only a duel threat back, but one who has the potential to lead his team both in rushing and receiving, and that doesn't come easy.

After it was announced that the Panthers would be listening to offers, the Bills, Rams, and 49ers appeared to be the first three teams lining up, but there will be plenty more. Kansas City will be on that list, as well as several other playoff-contending teams looking to add a playmaker to their roster.

Granted, the Panthers would be wise to move him, especially when you look at what this franchise is going through right now; I don't see them getting the return they would like. Carolina wants not one, but multiple first-round picks for their star player, and not many teams have that kind of capital. The ones who do may not be willing to commit to a guy who hasn't been healthy consistently.

Carolina may be asking for too much when you look at his injury history, salary figure, and the duration of the RB shelf life. That could pose a threat to Carolina receiving anything for him. With the Bears sitting at 2-4, you could argue that they could be 4-2 when you look at how some of those games turned out.

That is all water under the bridge, and this team is what their record says it is. As expected, Ryan Poles and Matt Eberflus have spent the past weekend evaluating everyone on this roster and how they can turn things around. Much of it falls on the players and their ability to produce better, but some improvements may have to come from outside the organization.

That said, look for Poles to be very active on the trade market, which could have some implications for the Bears. If Chicago wants to go after McCaffrey, most fans would be on board with that decision. However, that would mean the end of the road for David Montgomery, who is in the final year of his contract.

Don't get me wrong, Montgomery is a great RB and will have a promising career, but he is not better than McCaffrey. Not to mention Khalil Herbert is an excellent backup and has proven to be able to handle a starting role. Trading away Montgomery makes sense even if McCaffrey doesn't come back in return.

Montgomery has been a great player the past four seasons, but he is a steady player and not the home run threat McCaffrey is. That is something the Chicago offense has been missing, and if I were Poles, I would be calling the teams interested in McCaffrey and looking to deal with Montgomery instead.

If the Bears can do that, it would shrink McCaffrey's market, forcing the Panthers to give him away for less. Should that happen, he could fall right into their laps. Can you imagine what a guy like McCaffrey could do for Justin Fields and this offense? He would give Fields a weapon he has never had and will give him an opportunity to have a great NFL career.