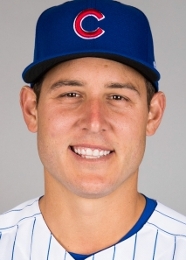 1st Base
B I O
Acquired by the Chicago Cubs with pitcher Zach Cates from the San Diego Padres for pitcher Andrew Cashner and outfielder Kyung-Min Na on Jan. 6, 2012. ... Made his Major League debut for the Padres on June 9, 2011 against Washington and recorded his first hit, a triple in the fifth inning. ... At 21 years and 305 days, he was the youngest Padre to make his big league debut since Sean Burroughs on April 2, 2002. ... Acquired by the Padres with pitcher Casey Kelly and outfielder Reymond Fuentes from the Boston Red Sox for first baseman Adrian Gonzalez on Dec. 6, 2010. ... Selected by the Red Sox in the sixth round of the 2007 First-Year Player Draft out of Marjory Stoneman Douglas High School in Parkland, Fla.