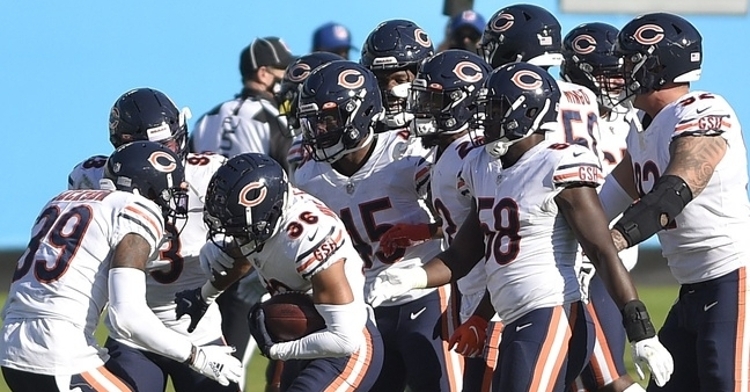 It was a crazy week for the Chicago Bears. It doesn’t really matter how they do it, but the wins keep coming for the first-place Bears. Quarterback Nick Foles said this team would rather win ugly than lose pretty, and win ugly they did.

Let’s give out our position grades for the Bears, who defeated Teddy Bridgewater and the Panthers in a 23-16 win.

Nick Foles was not particularly sharp in this one, but he did enough for the Bears to win. Foles threw for 198 yards and a touchdown, as well as an interception. Foles and the entire offense still seems to look for a rhythm, but another W earns Foles a B-.

.@ChicagoBears @NickFoles made 5 great reads; great throws on Sunday to help Bear a very disciplined zone defensive team of the @Panthers . He doesn’t need to fill a stat page with the #Bears defense. Appreciate who is playing QB for you. #BaldysBreakdowns pic.twitter.com/p0IIBkY8Ug

David Montgomery found the end zone and tallied 58 yards on 19 carries. Although he has been unable to break any big plays, Montgomery has been really consistent for the Bears. Montgomery also caught four passes for 39 yards out of the backfield. Patterson only tallied one carry and one catch, but this unit was solid enough.

Most forced missed tackles in 2020 (PFF)

This unit performed admirably enough to earn a C+. Allen Robinson had just an okay game with 5 catches for 53 yards. Rookie Darnell Mooney caught three passes for 36 yards. Anthony Miller will look to be involved more, but he grabbed three balls for just 8 yards. Expect this unit to keep growing with more time to work with Foles.

Only WRs with 30+ targets and zero drops:

This unit, with an overfilled position room, had a solid day on Sunday. Rookie Cole Kmet caught his first career touchdown. Jimmy Graham continued to be a big part of this offense with another five catches for 34 yards.

I agree with @olin_kreutz -- #Bears TE Cole Kmet put together a nice game in a limited role against the #Panthers and seems to be ready for more.

His tape shows effective run-blocking, stout pass-blocking, and a major contested catch. Excited to watch his development from here. pic.twitter.com/NtJFmVjtBo

The offensive line did a solid job protecting against Carolina. The o-line gave up no sacks and did enough to protect the Bears. Not exactly a strong unit, but a decent game from the o-line.

#Bears offensive line coach Juan Castillo was back at practice today after self-quarantining last week and skipping the trip to Carolina.

The D-line was great on Sunday, pressuring and knocking Teddy Bridgewater around all game. The unite produced four sacks. Bilal Nichols and James Vaughters were involved, and a strong performance from Akeim Hicks helped.

Khalil Mack was phenomenal for the Bears, dominating the game and coming away with a sack. Roquan Smith had seven tackles, and Danny Trevathan had six.

The Panthers did not have hardly any big plays, and the receivers were mostly slowed down. Kyle Fuller was all over the place, and Tashaun Gipson and Deandre Houston-Carson came away with picks. Eddie Jackson had an interception returned for a touchdown that was called back. I loved what this unit showed.

Eddie Jackson leads all safeties with the most coverage snaps without allowing a touchdown so far in 2020 pic.twitter.com/oKclq43XS3

Cairo Santos made three field goals; the third was a 55 yarder. Santos is perhaps the Bears' long-awaited answer at kicker.

How about @ColeKmet and his reaction to Cairo Santos’ 55 yarder? He really lets Chris Tabor have it. pic.twitter.com/C88foWvAB0

Adjustments still need to be made, but there were flashes of a formidable offense in there. It is up to Matt Nagy to find it. The offense was without a rhythm, but a win is a win.

Nonetheless, this team is 5-1 and looking to make it 6-1 on the road against Aaron Donald and the Los Angeles Rams on Monday night on ESPN.