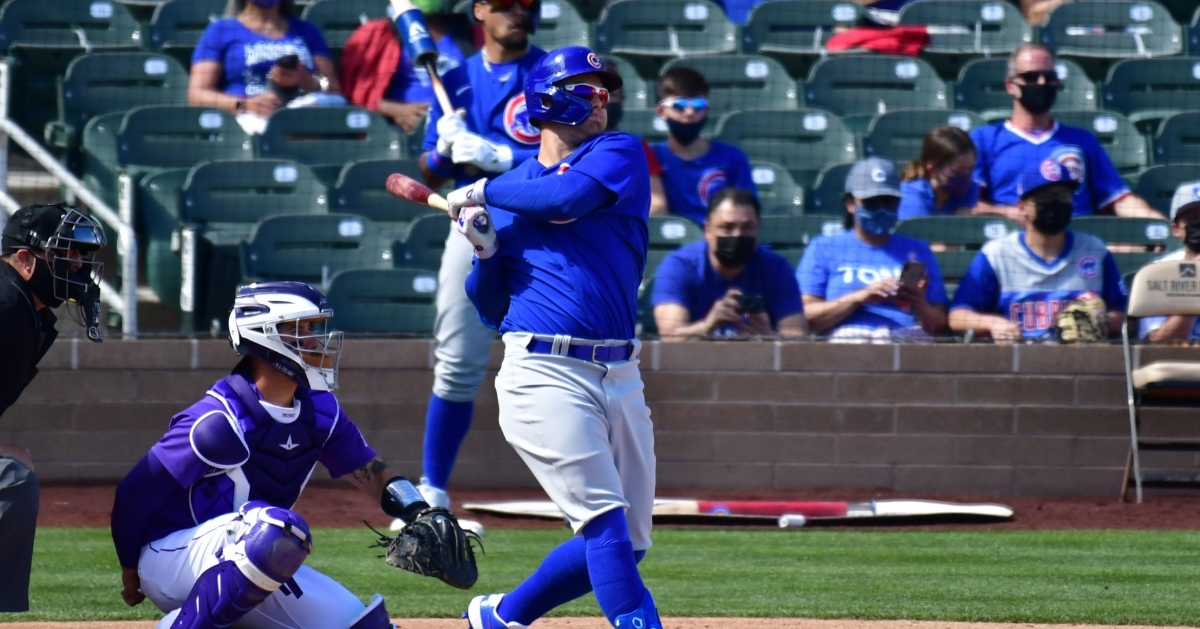 We will try to have this feature several times a week so everyone gets a summary of what is happening regularly at Cubs camp.

Newcomer Joc Pederson has been tearing it up this spring, hitting .579 with five homers with 9 RBIs and a cactus-leading 2.110 OPS.

"Joc's in a really good place. I think that's evident," David Ross said on Friday. "He's in a special place. If I could wrap him up and ship him off to Chicago and keep him right there, I would."

He certainly will be a important piece in the middle of the lineup for 2021:

Anthony Rizzo spoke to the media Friday and is optimistic that he will sign an extension with the Cubs.

"I'm very optimistic," Rizzo said. "I want to be here for the rest of my career. I want to be here 25 years from now when the Cubs are in the World Series, throwing out first pitches. I’ve seen other Cubs greats come back. That motivates me to keep getting better.”

He is also hopeful for another title in Chicago sooner rather than later:

Another El Mago highlight that is classic El Mago:

No-look, between the legs.

Cubs catcher Austin Romine is still dealing with a knee injury that is testing the Cubs' depth at catcher.

"He's day to day," Ross said Friday. "He's feeling better each and every day. There's just really no timetable. We're just trying to let it calm down a little bit and move forward from there."

Jose Lobaton and P.J. Higgins are two backup catchers still on the spring roster that have been getting extra work in case Romine doesn't get back 100 percent by Opening Day.

Cubs catcher Austin Romine has not played since Saturday. Currently working back from a right knee sprain. Not believed to be too serious, but Romine still under evaluation. No established timetable for return to games as of right now.

Veteran outfielder Cameron Maybin talks how he tries to bring people together and be friendly to everyone including those that aren't well liked in the locker room:

Cameron Maybin has proven himself as one of baseball’s greatest people, and he reminded us why on @thecompoundpod pic.twitter.com/tXThsRKs0l

The Professor talks about how much Cubs fans mean while playing baseball at Wrigley Field:

Cubs general manager Jed Hoyer expects that Javy Baez, Kris Bryant, and Anthony Rizzo to all have bounce back seasons in 2021:

CubsHQ's Dustin Riese gives his latest projections in the outfield:

The Cubs have been raking offensively early in spring camp with the highest OPS in the majors:

The City of Chicago will dye the river green on Saturday for St. Patrick's Day:

Surprise! City confirms overnight it will dye the river green today for St. Patrick’s Day. It seems they remained quiet about it until now to keep away the crowds. Details on @nbcchicago at 8am. pic.twitter.com/OLqg17XMZ9

Former Mets standout Gary Carter shared a cool photo of him and Andre Dawson in the 80's:

An interesting retro pic of George Altman in 1961:

Here is a rare photo of Frank Chance wearing an old-school Cubs uniform and check out that small mitt!

What a Uni! Frank Chance, the "Peerless Leader," led @Cubs as playr-mgr to 4 pennants & 2 WS titles in 5 yrs (1906-10). The HoF 1B was a terror on the basepaths, had lifetime .394 OBP & anchored the most famous infield of the Deadball Era. His @sabr bio https://t.co/VVcLloYDN6 pic.twitter.com/NDTceOi4jz

Check out this 1932 photo of former Cub Bud Tinning: