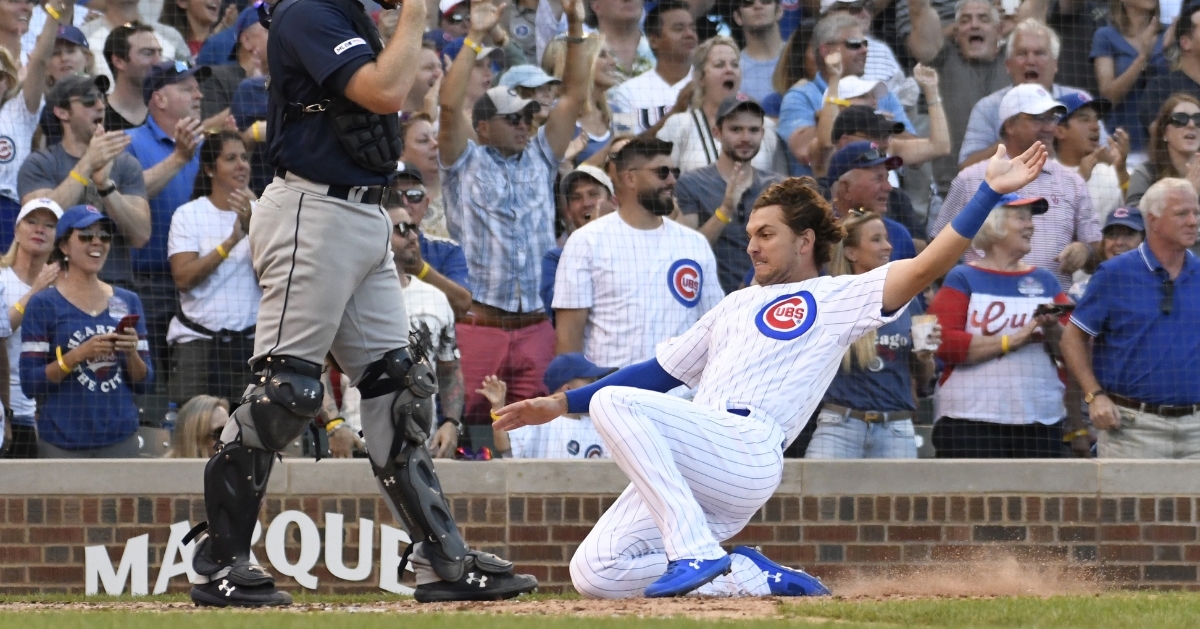 Albert Almora Jr. scored one of the five runs manufactured by the Chicago Cubs in the bottom of the seventh inning. (Credit: David Banks-USA TODAY Sports)

CHICAGO — Staring down a 25-inning scoreless stretch, the Chicago Cubs (74-63) snapped out of their offensive slump quite emphatically on Monday. After failing to plate a run for 24 consecutive innings, the Cubs came alive at the plate in the bottom of the seventh and pushed five runs across. The big inning proved to be enough for the North Siders to come away with the win over the Seattle Mariners (58-81), with Chicago collecting a 5-1 victory in the opener of the 2-game series at Wrigley Field.

Entering the contest having suffered two straight shutout losses, the Cubs struggled to escape the scoring lull for the most of the game, with several Chicago baserunners being left stranded on base. Robel Garcia was particularly ineffective with runners on base, as he struck out swinging to end both the first and third innings when two men were on base. Overall, the Cubs went 2-for-11 with runners in scoring position and left nine runners deserted on the basepaths.

The Mariners, who tallied four hits and two walks on the afternoon, did not experience much success at the dish, but back-to-back doubles in the top of the fifth provided them with a lead. Following a 2-bagger by Dylan Moore, Dee Gordon drove Moore home with a double of his own. Cubs starting pitcher Kyle Hendricks gave up the pair of doubles, but he was otherwise solid in his six innings of work, in which he struck out seven and got taken for just three hits and one walk.

Young Mariners hurler Justus Sheffield also fanned seven in his scoreless 5-inning outing. Sheffield consistently garnered critical inning-ending outs while toeing the rubber, but Mariners relief pitcher Taylor Guilbeau was no so fortunate. Guilbeau inherited a couple of baserunners when he entered with one out in the bottom of the seventh. Anthony Rizzo proceeded to tie the game up at 1-1 with an RBI base knock to center field. Rizzo was also hit by two pitches in the matchup, thus becoming the Cubs' all-time leader in hit by pitches.

Kris Bryant advanced to second base on Rizzo's single, but an errant throw back into the infield allowed Bryant to take third while Rizzo trotted to second. An intentional walk of Garcia then loaded the bases and set up a double-play possibility, but Kyle Schwarber had other ideas. Smacking a screamer that ricocheted off first base and into right field, Schwarber cleared the bases with his second triple of the season, thereby providing the Cubs with a 4-1 advantage.

Soon afterward, Schwarber scored on a chopper hit by Addison Russell, which resulted in the eventual final score of 5-1. Cubs reliever Brad Wieck finished off the Mariners with a flawless ninth inning that included two strikeouts, and the Cubs improved to 3-0 in games against Seattle this year. The Cubs totaled seven hits and six walks in the victory and will look to defeat the Mariners in their final interleague affair of the regular season on Tuesday.