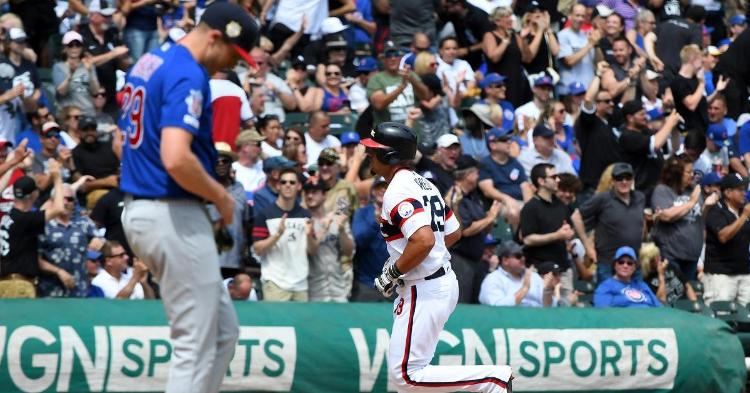 The four runs scored in the contest were produced via three home runs, two of which were hit by the White Sox. (Credit: Mike DiNovo-USA TODAY Sports)

CHICAGO — Finishing out the 2019 Crosstown Classic and the unofficial first half of the 2019 regular season in deflating fashion, the Chicago Cubs (47-43) mustered just one run at Guaranteed Rate Field on Sunday. Losing 3-1 to the Chicago White Sox (42-44), who donned retro uniforms, in the finale of the season series between the intercity foes, the Cubs were a miserable 0-for-8 with runners in scoring position and entered the All-Star break with their tails between their legs.

All four runs were scored via the home-run ball on the afternoon, as the White Sox were not particularly effective with men on base, either. Cubs starting pitcher Kyle Hendricks was left in for just four innings in his second start back from a stint on the injured list, and he avoided giving up runs until former Cubs prospect Eloy Jimenez got to him. The White Sox left fielder followed up a leadoff single by former Cub Jon Jay in the bottom of the fourth with a 438-foot 2-run bomb skied beyond center field.

Kept that one fair. pic.twitter.com/48vDhdB0S2

With the Cubs trailing 2-0, Hendricks was pulled following the conclusion of the fourth frame. He received no run support in his outing, as the Cubs wasted leadoff doubles in back-to-back innings. Cubs center fielder Albert Almora Jr., who made a spectacular leaping catch in the bottom of the first, kicked off the third with a double that hit off the top of the wall in left field and barely missed going out for a home run. Almora was left stranded, however, and Cubs first baseman Anthony Rizzo, who started off the fourth with a double to deep center, was left stranded after smacking a leadoff 2-bagger, as well.

Not much gets by this man. pic.twitter.com/YM60womqII

Reliever Randy Rosario replaced Hendricks on the bump and garnered two quick outs before being pulled in favor of Brad Brach. In the first at-bat of Brach's stint, White Sox power hitter Jose Abreu, drilled a solo dinger to right that provided the White Sox with a 3-0 lead. In the top half of the next inning, Cubs right fielder Jason Heyward grounded out to end the inning with runners on second and third. Six total baserunners were left on base by the Cubs, while the White Sox left seven. Both teams grounded into two double plays in the low-scoring affair.

The Cubs were finally able to get on the scoreboard when recent call-up Robel Garcia made up for an error that he committed at second base in the bottom of the sixth by hitting a towering moonshot out to left in the top of the seventh. Garcia's second career long ball, the 394-foot solo tater sported a launch angle of 32 degrees. Down 3-1 at that point, the Cubs did not seriously threaten to cut into the South Siders' lead after that, with the North Siders hitting into inning-ending double plays in the eighth and the ninth. Due to a stipulation that a team must win the 4-game interleague series outright in order to take possession of the Crosstown Cup, the Cubs maintained possession of the trophy after the season series was split.